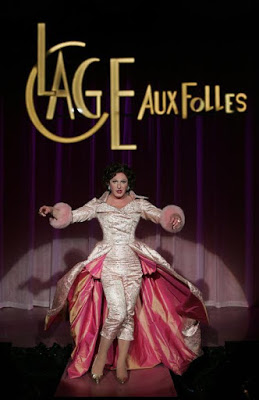 The show features terrific acting and a variety of songs, ranging from upbeat show tunes to slower romantic melodies, so there’s something to satisfy everyone. Between the risqué and up-tempo “We Are What We Are” and the emotional “Song on the Sand,” the musicians in the live orchestra had their work cut out for them.
The plot centers on a gay couple – Georges, who manages a nightclub, played by James Lloyd Reynolds, and Albin, the star of the drag show, played by Jamison Stern.

Conflict arises when their son falls in love with the daughter of a big-shot conservative politician.
Stern’s powerful rendition of “I Am What I Am,” a reprise of the show’s first song, “We Are What We Are,” struck a chord with many members of the audience.
As Albin poured his heart and soul into the beautiful song about the joy and importance of self-expression, the audience was moved to tears and applause fitting of the Act One finale. 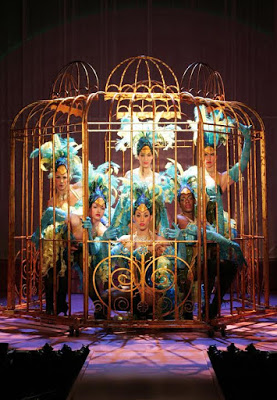 The Notorious Cagelles in peacock attire, inside a birdcage. (Provided)

While performing, Albin interacted with audience members.
“It’s scripted depending on what happens,” Stern said after the show in a special audience talkback session with the cast. “I would say it’s about 70 percent scripted.” 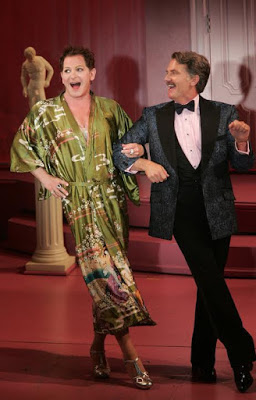 The Notorious Cagelles, the dance ensemble appearing throughout the show, made the most of their fabulous costumes. From flowy white dresses,
to colorful and frilly peacock outfits, the dancers were probably the best dressed of the show, and always covered in glitter.

They performed with a natural grace, doing cartwheels in high heels. Although much of the dancing was in the background, the ensemble was a
vital part of the show and contributed greatly to its spirit and mood.
The different pieces of the wonderfully orchestrated set moved seamlessly from scene to scene, completely transforming the stage from nightclub to home to restaurant and back again.
In the talkback session, Stern praised director Rob Ruggiero’s approach.
“He cares more about the truth of a moment than a joke,” Stern said.
Of course, no show can go on without the work of the technical staff and backstage crew. With barely any space behind the scenes, no fly space above the set, and incredibly fast costume changes, this crew faced many
challenges in order to make the show a success.
It’s “profoundly creative what goes on backstage,” said Joshua Ritter, education and library director for the Goodspeed Opera House.
Of course, at its heart, La Cage aux Folles is still a comedy, and the show is not without a truly incredible sense of humor.
While writer Harvey Fierstein’s material was much more shocking in 1983 for the Broadway debut of La Cage
aux Folles, the poignancy still remains in every line, every dance move, and every exaggerated gesture.
The show, which opened in June, runs until September 10.
YJI student reporters Alan Burkholder, Mugdha Gurram, Mary Majerus-Collins and Laura Espinoza Jara collaborated on this review.
***
Your tax-deductible contribution can help support this nonprofit at
www.HelpYJI.org 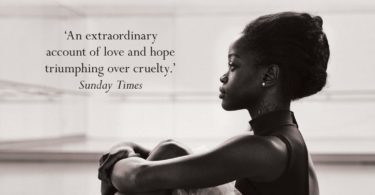