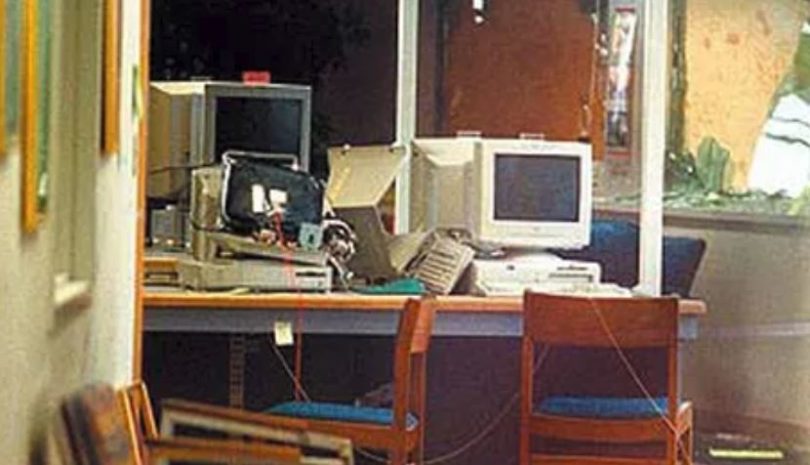 BRISTOL, Connecticut, U.S.A. — Last Tuesday afternoon in the sleepy suburb of Littleton, Colorado, the worst school shooting in U.S. history grabbed the attention of the entire world, and focused it on Columbine High.

As the authorities rescued trapped victims, they found bodies under desks and cubicles, presumably cut down while trying to hide from the explosive gunfire, while others were scattered on staircases, backpacks still attached.

The aftermath of such a chilling display of violence has been one of consuming sadness, and the silent, harsh realization of the seriousness of this widespread epidemic.

Ironically enough, a bill backed by the National Rifle Association, relaxing restrictions on concealed weapons was slated for debate by the Colorado House of Representatives the day following the shooting. I wonder if the recent events will influence their decision.

As these occurrences become more and more prevalent in the headlines and kitchen table discussions, we find ourselves asking, “Why?”

Why do these senseless acts of violence continue to ravage our schools? Why are our seemingly average children committing terrifying crimes of murder? Why haven’t we acknowledged the swiftly dwindling moral fibers of our society?

It seems there are a lot of questions, but few if any, inadequate answers.

As a student, I am instilled with a distant fear that perhaps, if this sort of thing could happen in a town of 39,000, why not in a city of 60,000? How do we ever go back to school with a feeling of security knowing that the social “outcasts” may be planning to avenge the taunting of their peers? Everyone has their own problems, and everyone feels isolated or lonely sometimes, but does that justify blowing away a dozen or more random students?

School should not be an environment of paranoia, but one of learning. How many times does this have to happen before something is done?

The time line of in-school violence is alarmingly lengthy, and its casualties are becoming increasingly numerous.

Children killing children. I would ask what is next, but I am afraid someone might tell me the truth: that it will only get worse.

Something drastic needs to be done, and quickly, because the distinction between the line that should never be crossed and the other side is becoming rapidly blurrier.

Even if it helped, it is impossible to place the blame on just the administrators, students, or parents. The responsibility falls on the community, as these children were a product of it. Could this shooting, like so many others, have been prevented? That is one question that we will never know the answer to, and the residents of Littleton will live with the rest of their lives.