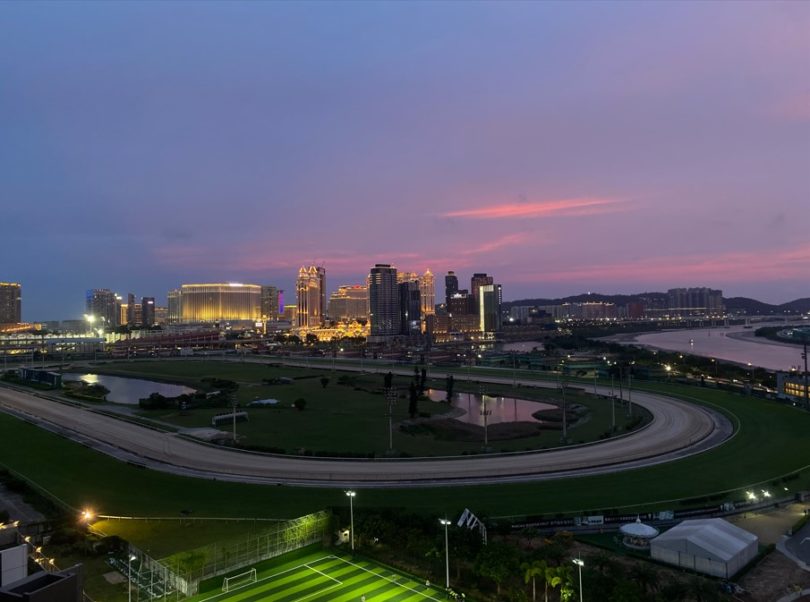 The Cotai skyline of Macau, which includes the city's famed casinos. (Kayla Chan/YJI)

MACAU – For myself and the 600,000 other people who live in Macau, three common words in my vocabulary are “near Hong Kong.” Although we’re somewhat prone to riding the coattails of our industrious neighbor’s shiny reputation, this lesser-known city has an identity of its own.

There are many ways to describe Macau. A statistician might rattle off some numbers: 33 square kilometers in area – not even a dot on the map, even when you zoom in to China; 20,700 people per square kilometer in population density, quite a crowded place to be; 81.73 years in life expectancy, third highest in the world.

As a fan of writing, however, words are my favorite medium. So if I were to describe Macau in three words, they’d be “multicultural,” “comfortable,” and, of course, “home.”

Macau is multicultural, because it’s home to a variety of ethnicities and nationalities and had for years been under Portuguese rule. Even though we have to cross a literal country border to leave the city (courtesy of some slightly convoluted laws), there’s plenty of cultural variety we can experience within its confines. Every day, I meet people from all corners of the map, and I am constantly astonished by the varied palette of cultures the world has to offer.

During autumn, the city hosts the “Macau Food Festival,” something which my friends and I rarely miss. It offers the opportunity for us to taste new cuisines and – despite the language barrier – meet the various friendly owners of the diverse restaurants in the city and beyond.

Because it’s right by the Pacific Ocean, people from a variety of countries used to visit by sea, so much so that some of the ports have achieved historical status. At the locally famous “Hac Sa Beach,” the sand is dark. If you ask someone in the know, they might tell you something about sediments in the ocean – I wouldn’t know. On the beach, you’d also see children of various nationalities and backgrounds wading into the waves or burying their friends in the sand and hear the sounds of different languages.

Macau is also a comfortable place to live for a variety of reasons. First, the weather is mostly enjoyable. Because it’s located near the Tropic of Cancer, what we experience throughout the year can best be described as a diluted version of the seasons. During the summer months, it can get pretty hot, and the city suddenly becomes full of people in shorts and T-shirts. As the weather turns cold, we start sporting sweaters and puffer jackets, but it’s never to the point of freezing, so I’d say it’s bearable. In short, it’s rarely extremely hot or extremely cold, so it’s quite a nice place to stay throughout the year.

It’s also a comfortable place, because of the people. Everyone – from the owner of the stationery store to the street cleaner – is, for the most part, happy to chat, as long as you can circumvent any linguistic obstacles. And many local shopkeepers are willing to give you a pass when you’re a bit short on change. When I find myself lost in its labyrinthine alleys, I always feel like I can seek help from the people around me.

Finally, Macau is home. As everyone who lives here knows, the city is far from perfect. Because it’s only begun developing in recent years, there are still limited opportunities here, and most students end up studying abroad. And, even though there are many events and activities (did I mention the water parks?) available, sometimes it can get a little boring.

Despite all this, though, whenever I’m traveling for more than a few days, I always start to miss this place, and no matter how exciting other countries may be, their sights and sounds can’t compare to the feeling of being home. It certainly hasn’t got the glamorous reputation of our neighbor Hong Kong, or the quaint atmosphere of the Chinese towns up north, but to me, it truly is one of the best places in the world.

Kayla Chan is a Junior Reporter with Youth Journalism International.

Kayla Chan is a Junior Reporter with Youth Journalism International from Macau, China.