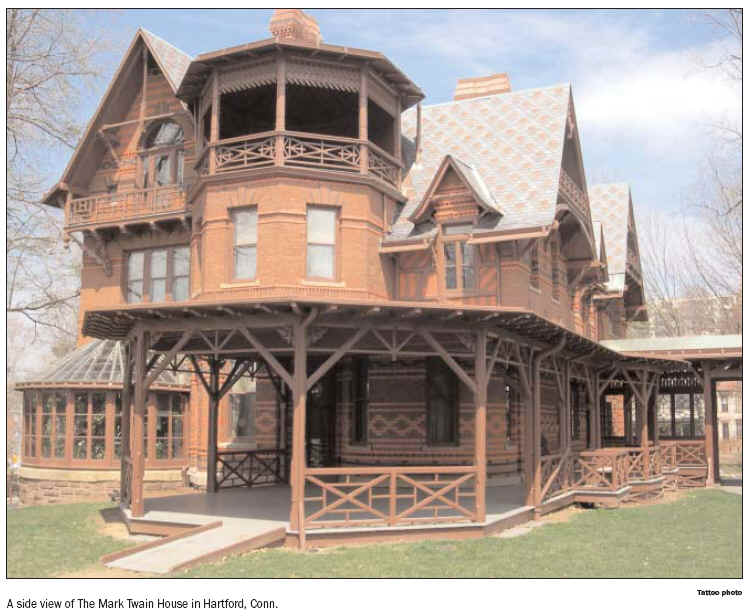 HARTFORD, Connecticut, U.S.A. — Imagine floating down a river on a raft, living by the day, with adventures waiting beyond every bend. That, ladies and gentlemen, is what Mark Twain was thinking when he wrote Adventures of Huckleberry Finn.

But the amazing part about it is that he wrote it here, in Hartford, Connecticut.

From afar, The Mark Twain House & Museum is an amazing example of architecture. The brick walls are accompanied by intricate carpentry and earth-toned burgundy-red-brown paint. The roofs jut into the sky at sharp angles.

It was in this house where one man helped changed American literature, and I was about to step inside.

Just outside the front entrance are masterfully carved birds and butterflies that remain suspended in flight by wooden brackets. Two stain-glassed windows welcome visitors with a floral image.

Across the threshold is a dimly lit hall. A metal stand by the doorway held old calling cards left by Twain’s guests from way back when.

I felt sort of bad because I didn’t have a card — I really wanted to leave one.

High on the wall was what I thought was a mirror, but surprisingly, it was a window looking straight to the adjacent room.

I walked into the next room and wow — the walls looked like a page out of a Magic Eye book. Hand-painted and stenciled geometrical patterns decorated the entire room with a hint of silver shine.

My eyes were hurting from just being in that room. I wanted to sit down. Behind me was an ornate pink-cushioned chair with padded armrests. If it weren’t for the museum’s restriction, I would have plopped down on it right that second.

It might sound like a boring old house tour, but as I took the time to listen to the guide and observe the house carefully, it turned out to be a pretty interesting experience. As the tour continued, it only got better.

The dining room was a trip. If I were a vegan, I would have had a heart attack over the leather-covered walls.

But luckily for all the vegans out there, it was mere textured wallpaper painted to look like leather. It was meant to give the room a wealthy and luxurious touch.

The following room was the Twain children’s schoolroom.

What got me was a little painting on the wall. Viewing it up close, I saw two figures resting their arms on a counter, but as I walked away I saw a skull. Talk about creepy. I must say I scurried a tad bit faster out of that room than I did the others.

We finally went to the third floor where all the magic happened — that is, Twain’s literary achievements.

My hands held onto the thick mahogany rail as I ascended. At the top, the guide stopped and waited for the rest of my tour group to arrive.

When everyone was gathered, we entered the billiard room, the place where Twain spent his time writing. I never thought of Twain as a billiard man, but the first thing I saw was a large pool table.

Just to prove his love for the game, Twain had a painted reflection of the pool table on the ceiling. Etched into the windows, behind the area where he wrote, were a pair of pool sticks and a wineglass, emphasizing that booze and shooting pool were some of his favorite pastimes.

It felt pretty amazing standing in the middle of the room where Twain wrote renowned works like A Connecticut Yankee in King Arthur’s Court and The Prince and the Pauper. It’s just unbelievable that Mark Twain sat in that very room with a pen and paper, scribbling away into American literature a new Realist movement that veered away from the accepted Romanticism of his time.

Walking away from my visit to the Mark Twain House left me with a newfound respect for his contribution to American literature.

Twain’s work is read in schools and homes all over. Whether you’re an architecture buff who admires the house’s beauty, or a bookworm who enjoys the author’s skillfully written stories, the Mark Twain House is a great visit.

I’ll leave you with one of Twain’s many quotes: “There is no sadder thing than a young pessimist, except an old optimist.”

Joe Keo is a Reporter for Youth Journalism International.