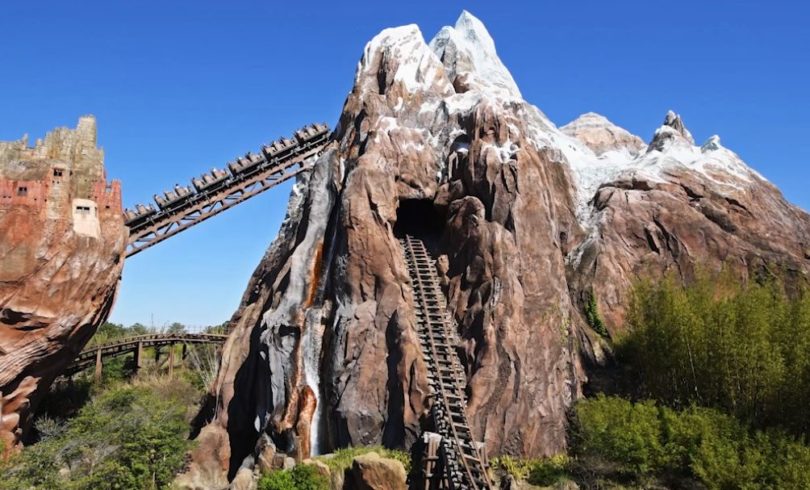 ORLANDO- Since the highly anticipated opening last spring of the Expedition Everest roller coaster, Disney’s Animal Kingdom theme park has been attracting a wider variety of visitors, and now thrill-seekers are among them.
Expedition Everest at Walt Disney World’s Animal Kingdom.
“We’ve seen many ‘tweens and teens attracted to Expedition Everest, which was expected,” said Walt Disney World spokesperson Gary Buchanan. “It brings a new level of excitement to the Asia section of Animal Kingdom.”
Before the addition of Everest, Disney visitors who wanted maximum excitement from a ride would choose one of the other three Disney parks to get their fix.
The Magic Kingdom hosts the three Mountains (Space, Splash, and Thunder), which have been favorites of park-goers for years.
Disney-MGM Studios is home to the Tower of Terror and Rock N’ Roller coaster, while thrill rides Test Track and Mission Space inhabit Epcot Center.
Since its opening in 1998, Animal Kingdom had been a theme park that was attractive mostly to children and animal-lovers. Besides its extensive variety of animal exhibits, the park also holds numerous other wildlife-themed attractions.
Among the other available rides are an African Safari featuring several animals, an animatronics-filled time traveling mission entitled Dinosaur, and Primeval Whirl — a slow but spinning coaster.
Animal Kingdom also features many extremely popular shows, such as “The Festival of the Lion King” and “Finding Nemo: The Musical.”
Now with Everest, Animal Kingdom has added a whole different species of attraction to their already successful collection.
“Our guests are a lot more excited about the park. A lot come specifically to ride Expedition Everest and then get to discover the rest of the attractions throughout the day,” Buchanan said.
One excited Disney visitor had extremely high praise for Everest.
“It was amazing,” said Alyssa Cappella, 16, of Southington, Conn. “It is my favorite ride in any of the parks.”
The Mount Everest replica that the coaster is built in and around stands at just under 200 feet tall, which is the biggest “mountain” at the Disney theme parks.
About 1,800 tons of steel was used to build the mountain, which is six times the amount normally used to build an office building of a similar size. The artists who designed the mountain used techniques to make it look even bigger than it actually is.
The surroundings are equally as impressive, as over 120 new species of plants and trees were imported to create a Himalayan environment.
The interior is decorated with visual aides such as a “shadow” of a yeti, or mythological creature that is believed to protect the Himalayan Mountains,.
Projected onto the rock wall, the shadow shows the 22-foot tall animatronics yeti tearing the track apart.
While on the Expedition Everest journey, passengers meet the yeti twice, including the time when he tears apart and forces the train to make a speedy backwards escape.
Although the sights are extraordinary, the ride itself is what brings riders back multiple times. Thirty-four passengers at a time speed through a mile-long journey forwards and backwards, including a breathtaking 80-foot drop.
Expedition Everest is sure to attract a larger and more diverse crowd to Animal Kingdom. Its mix of fantasy, with the yeti, and realism with the enormous mountain, makes for a great storyline, while the high-speed train’s twists and turns make this ride sure to have teenagers wanting to ride it again and again.

Sean Soltys is a Reporter for Youth Journalism International.