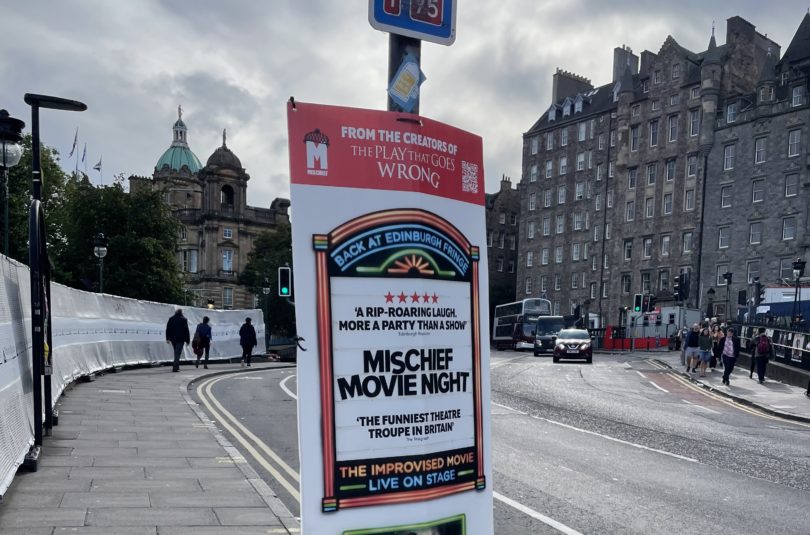 EDINBURGH – Mischief Movie Night, an improvised film by Mischief Comedy based entirely on audience suggestions, was the show at the Edinburgh Festival Fringe that I was most excited to see this year. After the performance, I had the pleasure of chatting with cast members Dave Hearn and Josh Elliott.

In 2008, Mischief comedy brought “Let’s See What Happens” to the Fringe. Since then, Lights! Camera! Improvise! (later renamed Mischief Movie Night) has toured venues across the UK, including several runs at the Fringe, a world-class performing arts festival held every August in Edinburgh, Scotland.

Hearn, a founding member of Mischief Comedy best known for originating the role of Max in The Play That Goes Wrong and The Goes Wrong Show shared his thoughts about returning to Edinburgh for the 75th anniversary of the Fringe.

“I think it was really important, but also we had space in the calendar and we’ve always talked about going back to the Fringe, always wanted to do it.”

He said the practicalities of going to the Fringe provided some challenges for Mischief, as West End and TV contracts often run during August.

The company had three productions at Edinburgh this year: Mischief Movie Night, Charlie Russell Aims to Please, and Mind Mangler: Member of the Tragic Circle.

During the pandemic, Mischief Movie Night In acted as their online translation of improvisation, streaming worldwide. Elliott, who is a medical doctor in his day-to-day life, described performing to an exclusively online audience.

“I found it weirdly liberating after the first few shows,” said Elliott, adding that the absence of a physical audience made it feel like the cast was just performing the show to each other.

Elliott talked about the questions he gets about rehearsing improvised shows.

“I think it’s basically like saying, ‘How can you build a house if you have no plans to it?’ But obviously the people that build houses have spent a long time learning to do the things you need to build a house,” said Elliott.

He explained that the cast spends a lot of time together, rehearsing the basics of acting and improvisation. Discussing the shows afterwards helps the cast improve their performances when similar scenarios arise in other shows, he said.

The group tries to rehearse to get the energy of a performance, Elliott said.

“(You’re) trying not to be in your head whilst also having in your head the loose storyline of what needs to happen,” said Elliott.

Hearn said there are things he wished he was asked more often about Mischief.

“I think everyone wants to know about how the company was formed and how it was made,” said Hearn, “but I guess a lot of people don’t talk about how it’s maintained.”

The company has difficult discussions, Hearn said, as it tries to keep the focus on collaboration, the key to their creative process.

Mischief Comedy’s The Play That Goes Wrong is booking until April 2023 in London’s West End and their new show Good Luck Studio is on tour in the UK from September 30th through November 12th.

A theater friend’s dying wish was for a show. His troupe gave him ‘Good Grief.’

A play that comes with on-the-job experience