HARTFORD, Connecticut, U.S.A. — It took a few moments for my eyes to adjust to the dimness as I stepped from the bright, sunny outside world into a hallway so stark and bare that it might have resembled the entrance to a cave more than the entrance to a museum, if not for the gift shop to the right, the two benches, and the desk where visitors check in.
Many museums try to nab their visitors right away, either with showy displays to catch the eye from the first instant, or with some pushy guide who pounces on you the moment you enter, eager to herd you along while talking a mile a minute. 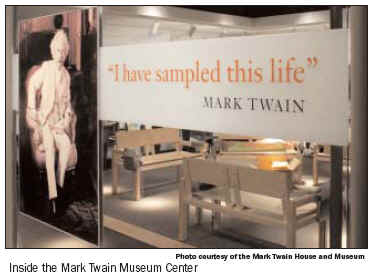 So for the first instant I was caught off guard by the quiet and emptiness of that first hallway. It actually echoed — or maybe that was just my imagination. But it was the sort of place that looked like it should echo, a dim corridor with cold stone walls and cold stone floors. It was a little eerie, actually. I kept expecting that pushy guide to jump out at me at any second and take me by surprise.
It wasn’t just the fact that this wasn’t what I expected from a museum that bothered me. It was that I actually like Mark Twain. I’ve read some of his books and stories. I know a lot of his funniest quotes. I admire his good-natured humor and the warmth I found in his writing.
So why should the museum dedicated to his life be so cold and dreary?
But then I realized the walls were not completely bare when I caught sight of the first humorous Mark Twain quote engraved across the stones there.
Suddenly, something clicked in my mind.
Like the man himself, the museum has a gruff, no-nonsense exterior. But, like the mischievous twinkle in his eye, the humor and heart is there just below the surface. It’s imprinted forever on the walls throughout the museum.
The place didn’t seem so cold after I realized that.
In truth, the museum is a very fitting memorial for Mark Twain, in many ways.
Even in building the structure itself, those behind its creation were true to what Twain would have wanted.
The museum, which is actually quite spacious, was designed so that it appears small when viewed from outside. So it doesn’t appear as a huge eyesore intruding on the place Twain loved and called home for many years.
The exhibits themselves are dedicated to the story of Twain’s life, from his birth as Samuel Clemens when Halley’s Comet blazed overhead, to his death with the comet’s return.
One of the first things I encountered was a video shown in a dark little room. As museum videos go, this one is actually surprisingly interesting.
It tells the story of what Twain called his “vagabond’s existence,” and the experiences which would become central to some of America’s greatest writings later.
In another room around the corner is a permanent exhibit about Twain’s life.
The circular room has a sort of timeline all around the walls that details his travels and some of his most noteworthy experiences. The walls behind the timeline are painted to resemble the various places he lived and worked, including Hartford, the Mississippi River, and Nevada.
In front of the timeline are lit glass cases containing some very nifty gadgets and knickknacks — some people might even call them “artifacts,” I suppose — from Twain’s life. There is a letter from Twain to his wife, there are a few dishes and so on.
Then there’s an invention that Twain created, some sort of game to help people remember important historical dates. Apparently it never caught on — which isn’t surprising, because it looks like it would be about as much fun as memorizing the telephone book.
The Paige Compositor also resides in this room. It was a clever invention which Twain himself did not invent, but suffered a similar fate to that of the historical dates memory device.
Unfortunately, Twain had invested all his money in this invention — and lost it all.
As if all that wasn’t enough, the center of this circular room has several benches with apparatus for listening to recordings of selections from some of Mark Twain’s short stories and books.
And for the little kids who may not be old enough to find Twain’s writings as amusing as I do, there are some hands-on type of exhibits down low enough for younger visitors to enjoy.
For example, they can lay a sheet of paper on a raised picture of Twain’s face and make a rubbing from the picture.
Even if they can’t yet understand slavery — one of Twain’s most serious themes — they can feel the weight of a chain and shackle in their hands.