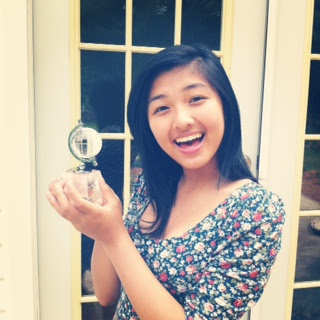 We’re happy to share these latest photos of a couple of the winners in the Youth Journalism International 2012 Excellence in Journalism contest.

Announced earlier this month, the contest, which is open to young writers, photographers and artists all over the world, honored teens in 18 countries. Most were not students at Youth Journalism International, though some, like Sara Chatterjee, who is pictured below, are.
Jasmine Wang, in the photo above, won the Jacinta Marine Bunnell Award for Commentary, the highest prize for commentary. It’s a very competitive category, but Wang’s work shone above the rest.
Wang, 16, is from East Brunswick, New Jersey and a student at East Brunswick High School.Her winning piece, “Curiosity, Creativity and the Curse of Education,” castigated the lack of creativity in schools. Flabbergasted by a friend who got a C+ on an AP English essay because it was “too creative,” Wang assailed the “rote and robotic formula of education” and the “close-minded educators and the pressure to do well, which often overrides all motivation to learn.”
Wang, who wrote the essay for the Windsor-Hights Herald, called on educators to focus on opening minds, but she also urged students to chart a new course. “Students, raise your hands, and keep your heads up high. For striking out is far better than cowering in fear. Shake the cage, break the mold. You are free, you are creative and curious and confident.”  There’s no doubt that’s at least true of Wang herself, who’s obviously not afraid to break the mold.The Bunnell Award is named for an inspiring Connecticut woman who died too young. It aims to reward students willing to take a stand and let their voices be heard.
Finalists in the category were Tasman Anderson, a student at the University of Queensland who lives in Brisbane, Australia, and Saachi Sharma, a student at Lady Shri Ram College for Women in New Delhi, India. Anderson wrote a column about virginity for Q Magazine. Sharma wrote about “The Hijab: From the Side That is Covered” for The Saltlist.