A view of Sword Lake in the center of Hanoi. (Thuy Le/YJI)

HANOI, Vietnam – I am a Hanoian. For those of you who are not yet aware of my hometown, Hanoi is the capital of Vietnam, that little S-shaped country in Southeast Asia.

With well over 6 million people, the bustling atmosphere of the city can be definitely predicted. 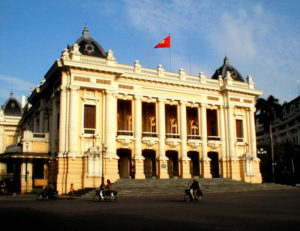 When one first arrives in Hanoi, it is likely that they will be stunned by the traffic here in a country where the majority of the population own motorbikes and wear helmets.

Therefore, crossing the streets has become a crucial art that foreigners and even many local residents aspire to grasp. 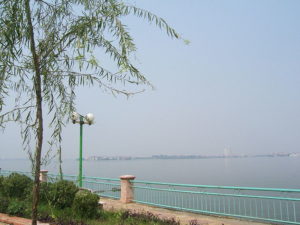 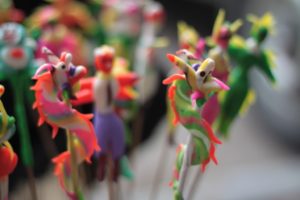 Hanoi enjoys a tropical climate, yet there are four seasons, with the most pleasant periods being late-August to late-October and early-February to late-March.

The summers are particularly hot and humid with an average temperature of 33 degrees Celsius, or about 91for those of you who use the Fahrenheit scale. 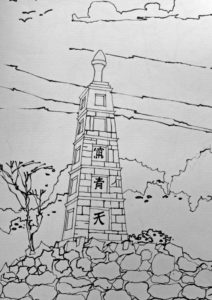 Thap But, or the Pen Tower. It is in the form of a pen and was constructed long ago to honor studying. (Thuy Le/YJI)

It is not without reasons that Hanoi belongs among Frommer’s “Top Destinations” in Asia: the city basically has almost everything. 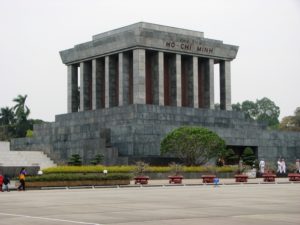 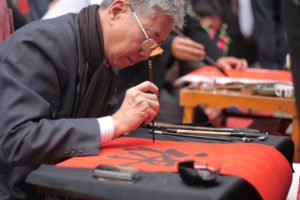 A man does calligraphy. Traditionally, Vietnamese get one  of these works at Lunar New Year festival to hang in the home. (Thuy Le/YJI)

For those with an interest in culture and history, there are an ample number of historical sites and attractions, especially in the Old Quarter where streets have merchants and households specialized in particular trades, such as silk, jewelry and other artisan crafts.

For those who have shopping in mind, the major centers as well as small boutiques are there to serve, offering all the brand names like cK, Mango, Converse and so forth. 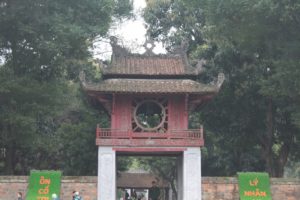 The historic Temple of Literature in Hanoi (Thuy Le/YJI)

Regardless of one’s purpose of visiting Hanoi, trying the cuisine is absolutely a must. Besides the renowned Pho, Cha Ca, Banh Cuon and Com are believed to come from Hanoi.
Mentioning food, I suppose it is necessary to introduce to you the street culture of Hanoi. No, I am not referring to graffiti or hip-hop, it is rather concerned with the fact that Hanoians frequently have their meals on the pavement. By this I mean on the sidewalk. 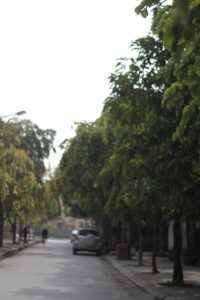 A street view in Hanoi  near the home of Youth Journalism International reporter Thuy Le, who took the photo.

In addition, the image of peddlers is present everywhere and the traditional, intimate markets remain more attractive than the self-service supermarkets.
My life to date has always been contained in this lively city, except for a few occasional trips.
These 17 years have been long enough for me to fall in love with my hometown, yet I fear no amount of time could allow me to understand it thoroughly.
I could rant on and on about Hanoi, but to avoid producing an all-word tour guide, I would like you to take a look at the photos and if possible, visit my wonderful Hanoi.
Thuy Le is a Junior Reporter for Youth Journalism International. 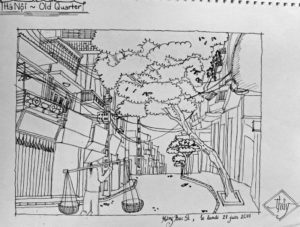 A drawing of the Old Quarter in Hanoi (Thuy Le/YJI) 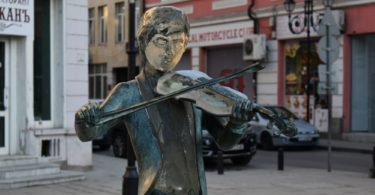