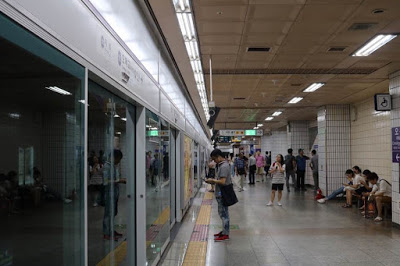 SEOUL, South Korea – South Korea is my ‘home.’ It’s where I was born, where I spent more than half my life, and where my family lives.

Our country is technically at war, and Seoul is North Korea’s number one target. But no Seoulite gives much thought to threats coming from up north. The most common response in South Korea to North Korean missile tests is, “Not again.”
Seoul is a megacity. It’s normal to travel in the subway for an hour and a half to reach another part of Seoul. And no, I don’t mean the suburbs.

Because I spend so much time on public transport, I consciously try to do something productive during that time. Most Seoulites turn their heads down to look at their smartphones – to play games, read the news or watch a rerun of their favorite TV program. I tend to read a book or do last-minute assignments for school.
The neighborhood I live in is called Mokdong. It literally means ‘tree village.’ As the name suggests, there are lots of trees, flora and parks. Located in the west of Seoul, it is one of the quietest areas of the city.

Mokdong itself is quite big, too. My particular neighborhood can be considered remote, but once you take a bus out into the busier areas, there are numerous cafes, restaurants and department stores.

If you wanted, you could live completely secluded in Mokdong and not feel the need to take a subway out into the city. There’s no variety here, though. I tend to feel the urge to get out of my neighbourhood quite often. ‘Exclusivity’ would
be a word to describe the place.

My home is quite close to Gimpo and Incheon airports. I love being able to watch airplanes. In the vicinity of my apartment, I can only see planes landing, but it’s a beautiful sight. 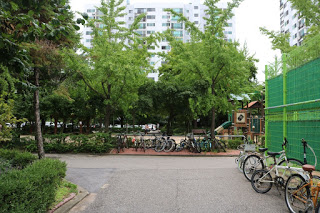 I could plane-watch all day. I once tried timing their landings, and found that one plane lands after the other approximately every two minutes. I take comfort in watching those planes. To me, they’re a means of escape, albeit mentally.
Seoul is one of my home cities but it’s my least favorite. It’s stressful hating your home city, but I find it hard to like Seoul for what it is.

Omokgyo in the Mokdong neighborhood of Seoul. (Charlie Bae/YJI)

There are reasons why I watch planes hoping I could be on one, leaving Seoul with a toothbrush, phone charger and nothing else. The biggest reason among them would be lacking a sense of belonging.
I call myself a Seoulite only because I’m physically in Seoul, not because I identify with it. The meagre politics, lack of welfare and inflexible education system all play into my negative outlook.
What’s more, Seoulites aren’t the politest in the world. They indiscreetly push past people in public, don’t apologize when they’ve stepped on your foot, and invade personal space.
Individuals fighting into crowds of people exiting the subway to secure seats for themselves is too common a sight.
Now that I’ve left to study abroad, I’m seeking ways to step out of Korea for good – in search of a home at heart.
***
Your tax-deductible contribution helps
support students served by this nonprofit.
HelpYJI.org