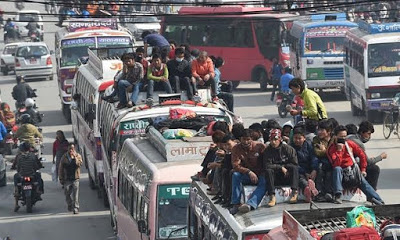 People catch risky rides on the roofs of buses in Kathmandu to get to their destination because an economic blockade that caused a fuel shortage is limiting public transportation. (Nirajan Kathayat/YJI)
KATHMANDU, Nepal – Nepal is a small, landlocked nation between two big countries – China and India. Nepal is bordered by India on three sides and China on one side.

Being landlocked, our country is almost fully dependent on imports from India for daily needs. This creates a dependency on India and unequal power dynamics.
Thus, the political condition of Nepal is also directly or indirectly influenced by India and this impacts common Nepali people.

A good example is the current economic blockade that Nepal is facing.
Because of the blockade, which keeps goods from entering Nepal, citizens here have been dealing with shortages, especially of fuel used for basic needs like transportation and cooking, for several weeks.

Nepalis are angry and blame the Indian government, though it isn’t clear who is exactly responsible since Indian officials say they there is no blockade from their side. 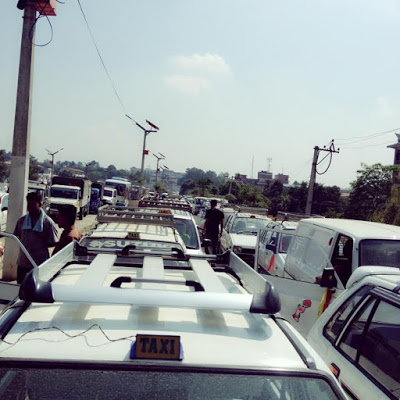 My question to the Indian government is, how does Nepal’s constitution affect Indian government and people of India? The blockade has really raised the question over the relationship between India and Nepal.
The economic blockade has really added difficulties in the daily lives of the common people of Nepal and the fuel crisis is the biggest problem. Due to the fuel
shortage, Nepal’s government has limited vehicle use. Drivers are allowed on the road only on alternative days, depending on whether their licenses plate ends in an odd or even number.
Due to this new policy, there is no public transportation for people to get to their jobs and schools. People are compelled to climb onto the roofs of vehicle to catch a ride to go to their destinations, which is very risky.
Schools may close due to lack of fuel. Besides fuel for vehicles, there is a shortage of cooking gas, causing problems in many homes.
Whether brought on by the Indian government or the work of an independent group that opposed our new constitution, the blockade has created negative feelings toward Indian government amongst Nepali people who are protesting against the Indian
government throughout the country. 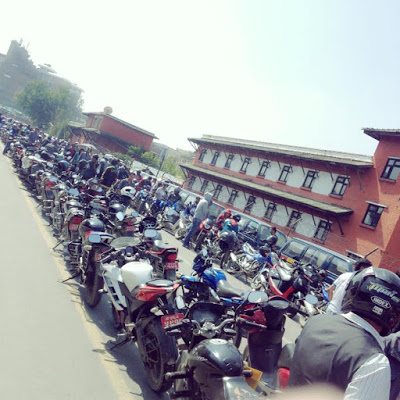 Motorbikes wait in line for fuel at a petrol pump in Kathmandu. (Nirajan Kathayat/YJI)

Nepali citizens are suggesting that the government of Nepal not bow its head to the Indian government. Our country has remained a sovereign nation throughout our history.

In September, Nepal adopted a new constitution. Many countries like China, Japan, France and Pakistan and the U.S. welcomed the new constitution but India, a democraticcountry, expressed dissatisfaction. It is ironic that a country which claims to be the one of the largest democracies is rejecting the constitution of Nepal which was brought out through a democratic process.

By imposing an economic blockade, Indians have violated their own constitution and international law by infringing on the rights of landlocked countries.

As one of the aware youth of Nepal, I have questions for the rest of the world: How can the rest of the world let landlocked countries like Nepal suffer from political dominance by bordering countries? Do landlocked countries have to follow what the
bordering countries say and run their countries according to their will? Aren’t there any international rules regarding the rights of landlocked countries? If there are rules, then why are those big countries that violate the rules able to get away without any consequences?
The world must think seriously about this issue.
Nirajan Kathayat is a Junior Reporter for Youth Journalism International.
***
Your tax-deductible contribution can help support the work of Nirajan Kathayat and other students served by this nonprofit at:
www.HelpYJI.org 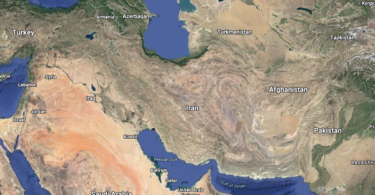