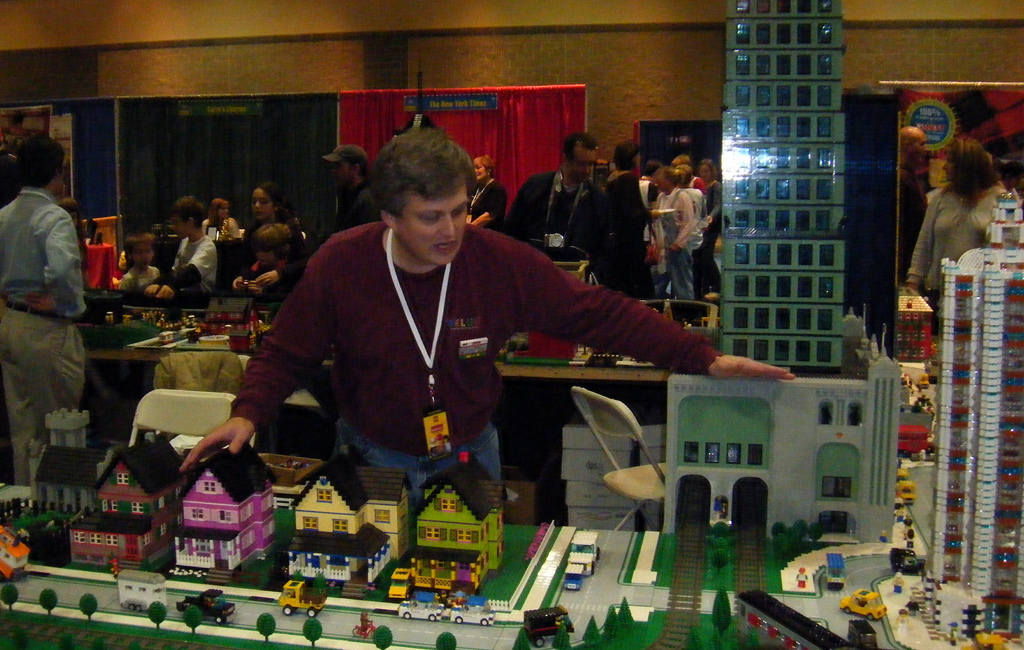 HARTFORD, Connecticut, U.S.A. – Towering skyscrapers and city trains. An amusement park. Cafes and parks, even a marching band, all made out of Legos?
Yes, at the Lego KidsFest in Hartford. While geared toward kids, adults made most of the displays. 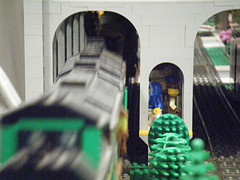 The largest and most impressive of these Lego displays, which ranged from a life-sized Darth Vader to Sponge Bob, were the two tables displayed by the New England Lego Users Group, a group for adults that love to build with Legos. “We’re just a club; we do this as a hobby. We all have real jobs,” said longtime member Joe Comeau, who said he “primarily builds amusement park rides.”

The New England group’s display featured a motorized amusement park – complete with whirling teacups and a dragon with flapping wings – houses and buildings and a train running throughout.

Some of the buildings were several feet tall, and included clear plastic Lego windows. One had two towers connected by a mostly clear walkway, many stories above the ‘ground.’

Lego lovers from around New England founded the group “almost exactly 10 years ago” in August 1999, said Eric Kingsley, one of the founding members.

They now have about 60 members “in all six New England states,” Kingsley said.

The group is mostly made of men, although “there are a few women,” Kingsley said.

Kingsley thinks the gender imbalance is mainly because Legos are marketed towards boys. He said the group would like to see the company also market the building toys to girls.

However, there are some women, and they are just as excited about Legos as the men are.

“This is just very cool,” said Linda Dallas, a five-year member. Her husband is also a member, she said.

She said her first group project was a “bug build” at the Connecticut Children’s Medical Center in Hartford. The children’s hospital wanted the group to construct some insects to fit in a rainforest theme.

In the Hartford show, Dallas provided the teacups in the amusement park and a pirate scene. 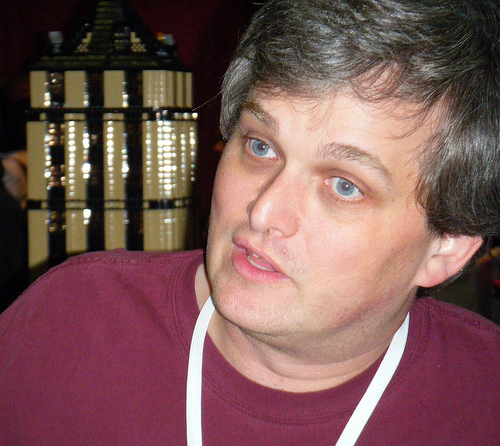 Eric Kingsley, one of the founding members the New England Lego Users Group at the Lego Kidsfest in Hartford, Connecticut. (Mary Majerus-Collins/YJI)

“The members each make their own buildings,” said Kingsley. “We try to maximize the amount of stuff on the table.”

Club members bring their own Lego structures to the show and set them up according to a color-coded map created using a computer design program.

The increase in members over the past few years has made the arrangement more complicated.

“It’s become hard to fit everything into a layout,” Kingsley said.

Kingsley’s main contribution to the event was a huge, multi-story train station that moving Lego trains could pass through.

Kingsley said he tried to incorporate features of other train stations into his structure, including Grand Central Station in New York City and another in Boston, near his home.

Although in real life he is a computer professional, Kingsley doesn’t use computer programs to help in his designs.

“I do it all from my head and from pictures.”

Despite the complexities, or perhaps because of them, the members still love to build.

“This is definitely a passion,” said Comeau. “It’s a blast.”

Kiernan Majerus-Collins and Clare Hern are each a Senior Reporter for Youth Journalism International. Mary Majerus-Collins, another YJI student, took one of the photos.