Masu Jubril had gone out on the streets for her daily routine of hawking Kunu, a locally made drink from Guinea corn, when the media became awash with reports of the kidnapping.

She could not believe her ears. When she returned home, she said, she could not hold back her tears. With her heart palpitating, she feared for her future and that of other girls in the northern part of the country.

“I felt for the girls. It got me thinking,” she said, as though they were her sisters.
She said she hopes President Muhammadu Buhari’s administration will make more efforts to rescue the remaining girls and reunite them with their families.
The news of the kidnapping shocked Anastasia Obeta, a teacher at St Johns Nursery and Primary School in Agyaragu.
“I felt bad when I heard it. I never expected such a thing to happen in this country. These girls were kidnapped and taken to a place we don’t know. Now, they have been exposed to sexual assaults. Only God knows what their parents are passing through,” Obeta said.

She advised girls in this part of the country to be careful even as they strive to acquire education.  Although Boko Haram means Western education is a sin, Nigerian girls must continue to go school, she said.

Kelechi Odoh, a salesman of building materials, has followed the story. He said he blamed the kidnapping on poor security.
“I was really appalled when I learnt about the kidnap because it is not a good thing for children to be in school and then they are kidnapped,” Odoh said.
He thinks the Buhari administration is doing its best to rescue the girls, however. He said the government is in talks with Boko Haram
to secure their release.
The horrifying crime of April 14, 2014 put Nigeria into the global spotlight. On that night, Boko Haram insurgents shifted slightly away from their routine bombings of worship centers, motor parks and the gun battles with the Nigerian military. 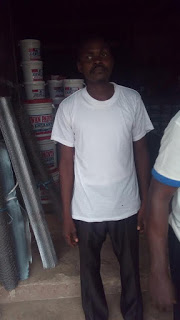 They captured more than 250 girls who were preparing for their final exams in a secondary school nestled somewhere in the remote town of Chibok, a community in Borno state, in northern Nigeria.

About 50 girls managed to escape, and media reports later said some got away by jumping from the truck that was used to capture them. The insurgents had come in the guise of security operatives sent to protect the girls from attacks in the area.
Many around the world considered the appalling kidnapping a crime against the girl child – and against girls’ rights to education – that transcended regional and national boundaries.
Celebrities and world leaders joined in the #bringbackourgirls social media effort to pressure the government to act, and Nigerians protested in cities across the nation.
Former Nigerian President Goodluck Jonathan’s administration failed to rescue the missing girls or stop other vicious attacks by Boko Haram. Nigerians elected Buhari, who talked tough on security and pledged to find the girls.
Though he’s made some progress against the terrorists, Buhari has mostly fallen short on rescuing the girls.
About 200 of the girls remain missing, unable to be with their families, to go to school or to contribute to the growth and development of their country.
Gideon Arinze Chijioke is a Reporter for Youth Journalism International.
***
Your gifts to Youth Journalism International help students
like Gideon Arinze Chijioke bring you stories from around the world.
Thank you for your support.
HelpYJI.org