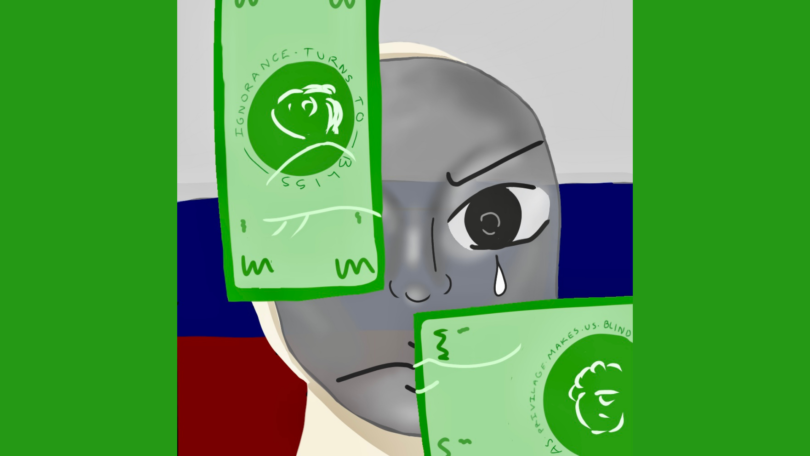 DHAKA – There is a poem by Ukrainian-American Ilya Kaminsky called, “We Lived Happily During the War.” The last few lines read:

In the sixth month

of a disastrous reign in the house of money

our great country of money, we (forgive us)

lived happily during the war.

When I first came across this poem shared under the hashtag Ukraine, I wasn’t sure I truly understood its significance. After all, I have never been in close proximity to a war.

Although my country has a bloody history because of our liberation war, I, a Gen-Z youth, grew up in a more digital and globalized world of the 21st century, where war is a concept of the medieval times.

At least it was – until Russia attacked Ukraine.

We, Gen Z, are witnessing a war unfold from the frontlines of TikTok and Instagram for the first time in history.

We have already seen firsthand how the teens, tweens and Gen Z youth are responding to this global crisis through Instagram infographics, hashtags, humor videos on TikTok, and social media campaigns to help the fleeing refugees. It’s at the point where U.S. President Joe Biden’s administration has briefed TikTok stars on the Ukraine war, according to The Washington Post.

When traditional diplomacy fails, TikTok diplomacy is here to assist.

Historically, wars have always had horrifying consequences. But what does war in the 21st century mean?

I would be lying if I said war is a myth today. Some of the deadliest wars, or proxy wars, have been in Afghanistan, Iraq, Syria and Yemen.

But the recent Russian invasion of Ukraine is different, with serious ramifications. Worldwide, people are feeling the economic, political and human costs from the war, which is impacting global politics and shifting the dynamics among countries.

The war has already shifted the paradigm of politics in Europe.

Two of the world’s most populous states, India and China, are watching closely as they abstained from voting on resolutions in the United Nations Security Council and General Assembly that demanded Moscow immediately stop its attack on Ukraine.

The New York Times bureau chief for south Asia, Mujib Mashal, reported about India – a nation isolated in a hostile region increasingly dominated by China – faces the challenge of engaging the West while not abandoning ties with an old ally.

This war is already changing the course of history.

Russian President Vladimir Putin has already warned about potential nuclear use. Russia is a heavily armed nuclear state. The risk still looms over us.

Nuclear weapon usage would not only bring catastrophic consequences – we aren’t ready to face the aftermath, either.

We must understand that the Russia-Ukraine war has implications far beyond this current globalized world and economy. According to a report by Al Jazeera, the International Monetary Fund has already warned that this war may fundamentally alter the ‘global economic order.’

And it has already altered it. The global supply chain is greatly disrupted by this war already.

How does this war impact us?

The distance from Russia to Bangladesh is about 4,356 km, or about 2,700 miles. The possibility of the war reaching here is nearly zero.

Yet my countrymen have not been immune from the war.

On March 3, a shell struck a Bangladeshi ship in a Ukrainian port with 28 sailors on board, instantly killing a young engineer.

The economic impacts of the war pile on top of the tragedy of human casualties.

According to a Vox report, countries like Bangladesh and nations across the Middle East, South Asia, and North Africa that already suffer from food insecurity may be further affected.

They all rely on Russia’s and Ukraine’s supplies of wheat, corn, and vegetable oil.

As the global supply chain is disrupted, the prices of essential commodities like soybean oil have soared in the last few weeks in Bangladesh, impacting domestic markets and making food essentials slip beyond the grip of those hit by food insecurity.

There’s also a concern about how western sanctions against Russia could impact a smaller economy like Bangladesh. The Rooppur nuclear plant, now under construction in Bangladesh, is funded by Russia.

Rooppur, Bangladesh’s first nuclear facility, carries a price tag of more than $12 billion, according to The Daily Star, the leading daily newspaper in Bangladesh.

In a globalized economy of the 21st century, this is how war doesn’t spare anyone.

War will always have my condemnation because of how much it takes from us. But when the irreparable damage is done, where do we go for compensation?

Usraat Fahmidah is a Junior Reporter with Youth Journalism International. She wrote this commentary.

Christine Marinho is a Senior Illustrator with Youth Journalism International. She made the illustration.