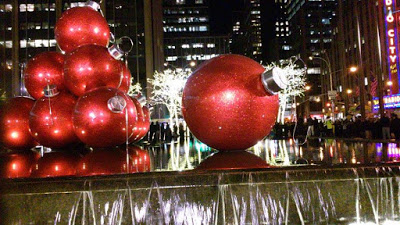 Giant ornaments on display in 2014 across from Radio City Music Hall. (Yelena Samofalova/YJI)
NEW YORK, N.Y., U.S.A. – If there’s anywhere besides the North Pole that screams Christmas from the top of its lungs, it’s the City That Never
Sleeps.

New York during Christmas has become a legend of its own. From ice skating to the infamous Radio City Rockettes, to the gigantic tree in Rockefeller Plaza, to the beautiful storefronts, it doesn’t get more festive than NYC.
Living in New Jersey, I’m lucky enough to have been able to visit New York almost every year during Christmastime, and it never fails to get me into the holiday spirit.
Whether you’re spending it in Times Square or in your grandma’s living room, I hope you have a wonderful Christmas and a happy New Year’s.
Brianna Ramos is a Junior Reporter for Youth Journalism International. 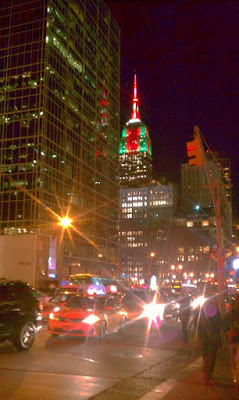 A view of the Empire State Building in New York at Christmastime last year. (Mary Majerus-Collins/YJI)

***
Your tax-deductible contribution helps students
served by this organization.
Thank you for being generous.
www.HelpYJI.org