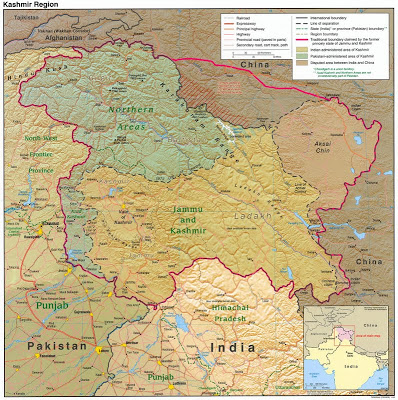 LAHORE, Pakistan – The Siachen glacier of the Karakorum mountain range is the second largest in the world.
But as part of the disputed area of Kashmir, this area is most famous for being the earth’s highest battlefield.

Here, India and Pakistan have fought for years over Kashmir. This warfare has been continued since 1984 and is still going on. Both countries have a permanent military presence in this frozen area where temperatures often get down to 50 below zero Celsius, or almost 60 below zero on the Fahrenheit scale.
This may be the most terrible and melancholy example of bloodshed on mountains.
This region has harsh weather conditions and many soldiers die each year – mostly due to extreme weather – and Siachen is considered to be the most dangerous area for a soldier to be, even in neutral conditions.
But the most tragic incident occurred April 7, when an avalanche hit the main Pakistani army camp in the Gayari Sector, Siachen, and many soldiers and civilians were trapped under more than 80 feet of snow. Estimates say the victims number more than 130 people.
When people across Pakistan heard the news, they thought only of Siachen, where about 3,000 Pakistani soldiers have died since the military post was set up more than 25 years ago.
After the April avalanche, about 300 soldiers and dozens of civilians have been working in the rescue operation. Along with this, heavy machinery is also being used, as much as it can be, as the area is quite difficult to reach.
After the avalanche, the weather and absence of equipment like human tracing sensors were hindering the rescue process.
Though rescuers were trying their best, and there was initially some word that the operation was moving towards success, few chances remain.
With more than a whole month passed, and almost 2,000 tons of snow removed, Pakistanis wait for news with fading hope.
Today, layers of sadness keep evolving. The incident has cast a gloom over the nation, especially the families of the trapped civilians and soldiers. Besides the efforts made by Pakistan itself, other countries offered condolence and help.
The Swiss, Germans and Americans were there to help, but most of them had to face difficulties in reaching Siachen due to bad weather, arduous and blocked pathways.
During the initial rescue operation, some news reports said the catastrophe was not an avalanche but a cloud burst, and that rocks, mud, snow and everything came down.
The rescue is getting harder and harder to carry on, day by day.
The leaders of Pakistan’s political parties have emphasized improving relations between Pakistan and India.
If it wasn’t for the “forever warfare” between India and Pakistan, the whole wall of snow would have never damaged so many soldiers or civilians in Siachin.
At least now, both countries should better their relations and avoid disputes.
I am sure if the two neighboring countries help each other instead of fighting, progress will come faster for both nations.
Arooj Khalid is a Reporter for Youth Journalism International.