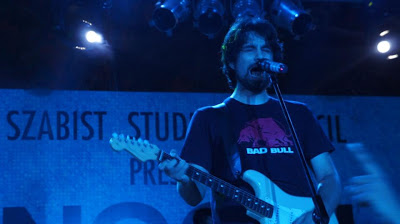 Bhutto Institute of Science and Technology
in Karachi, Pakistan last week
By Waleed Tariq
Senior Reporter
Youth Journalism International
KARACHI, Pakistan – Noori, a rock band from Lahore, took the
stage to open the school year as the Shaheed Zulfiqar Ali Bhutto Institute of
Science and Technology (SZABIST) welcomed its new and returning students in its
own unique way.

Noori played at the SZABIST Student Council’s Fall Welcome
Concert last week, drawing more than 600 students at the campus’ 100 Garden.
After a host of other events, the organizers of Freshmen
Induction ’11 rounded up a very successful Week of Welcome. It was a fun-filled
episode put together with a night with Noori, where the students put on their
dancing shoes and swayed to the enticing music.

The Sept. 20 Noori performance was the first time that a
concert has been a part of the University’s Welcome Week events.
The show began at 10 p.m. sharp, and brought in almost 650
students by then, said Omar Sarwana, sales lead of the student council.
With more than enough registrations for the concert, the
lawn was packed with students excitedly pouring in, ready for a great night.
“It’s been great here. I love it,” said social sciences
senior Rida Fatima. “It’s always worth it to be at a Noori concert, and after a
solo performance by Gumby, it’s completely awesome.”
The band rallied the audience by playing “Manwa Re” and “Dil
Ki Kasam,” upon which they continued to belt out their other classic numbers.
“It’s a great event – epic performance by Noori, and I’ve
enjoyed a lot after a very long time,” Batool Zahid said. “It’s like being back
in your teens.”
Other than Noori, Jumbo Jutt, an emerging local rock band,
also played. Moreover, Zab Olympics, the campus’ own version of Olympic sports,
and a Societies Fair were also a part of the Welcome Week activities.
With the entire administration and seniors welcoming the
flock of new students, SZABIST pulled off a great night and a successful Week
of Welcome, setting a promising example for future student councils at the
campus.