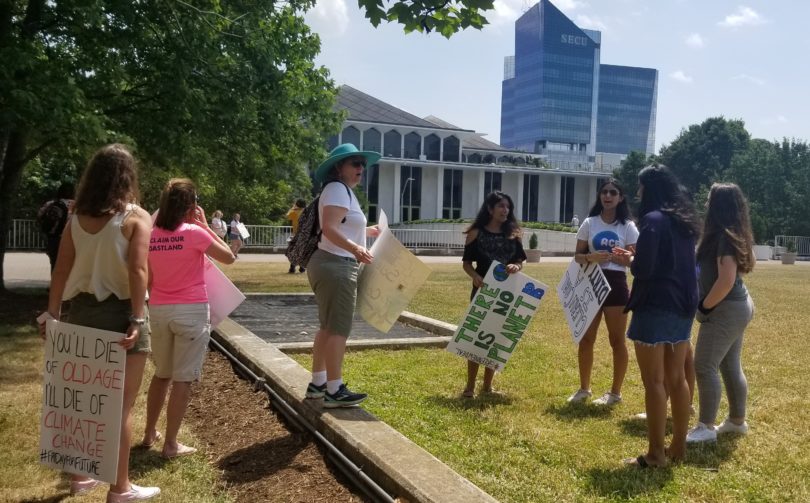 Raleigh, NORTH CAROLINA, U.S.A. – Demonstrators of all ages held signs and chanted slogans on a grassy field outside of the North Carolina State Legislature at a recent climate strike here in the capital city.
The May 24 event followed in the footsteps of student-led climate change demonstrations that began in London and traveled around the globe.
The strike, organized by students, featured speeches from student leaders like high school junior Annika Pillutla, who is on the executive board of the state Teen Democrats.
Pillutla spoke about the environmental policies of various Democratic presidential hopefuls.
“We have momentum now,” Pillutla said, regarding the importance of climate change in the 2020 elections. “Politicians are prioritizing it. Who we vote for will make a difference.”
More speakers, including volunteers, academics, and other students, followed Pillutla’s remarks. 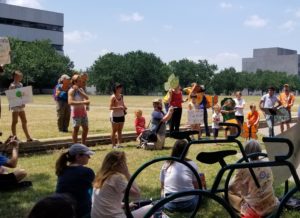 Climate protesters listen to a speaker in Raleigh. (Vinithra Sudhakar/YJI)

Shaina Nanavati, a volunteer with the Sunrise Movement, an environmental activism foundation in Durham, North Carolina, stressed the importance of diverse voices calling for change.
“One of the reasons I really wanted to start getting involved in activism was to get more young people of color to realize that these issues affect them directly,” said Nanavati.
Student climate strikes, which began in Sweden in 2018 with teenage activist Greta Thunberg, have now occurred in more than 130 countries.
The global movement Thunberg started will culminate in New York City on September 20th, when hundreds of climate activists will gather outside of the United Nations headquarters during an international climate summit.
This time, youth activists like Thunberg are calling adults to join in. “It is time for all of us to unleash mass resistance,” she wrote for The Guardian. “This won’t be the last day we need to take to the streets, but it will be a new beginning. We’re counting on you.”