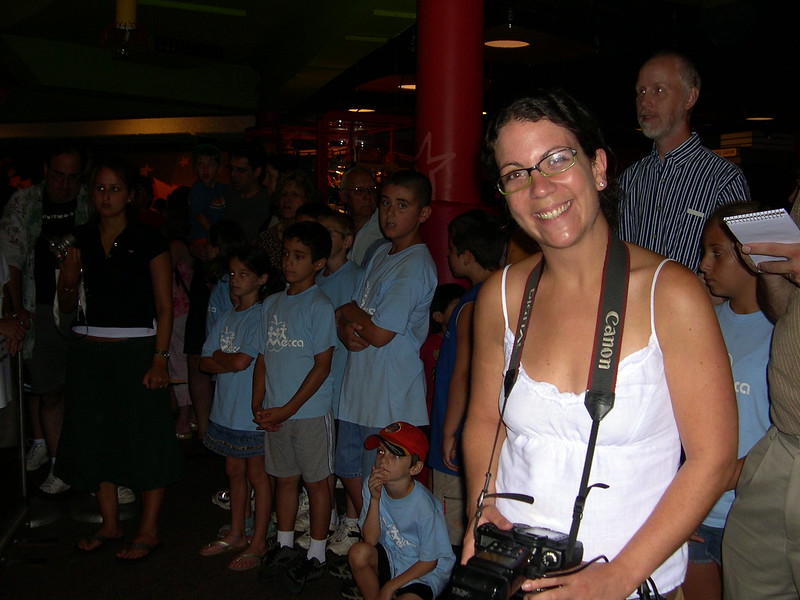 WEST HARTFORD, Connecticut, U.S.A. — Like flies buzzing around a picnic, journalists covering a political campaign stick close to the juicy stuff.
In Connecticut’s hot race for U.S. Senate, there’s plenty for reporters to chew on.
Sen. Joe Lieberman is on the run from challenger Ned Lamont in a Democratic primary so intense that it’s drawing reporters from the Big Apple.
The longtime senator is running the final stretch of his campaign on a big bus labeled “Joe’s Tomorrow Tour.”
On the bus, reporters and photographers ride with Lieberman, his wife Hadassah and some members of his staff from one campaign stop to the next.
Reporter Jennifer Medina of The New York Times, covering Lieberman for her paper, said she was riding the bus nearly every day.
Lieberman usually makes the same speech at every stop with different variations of it, Medina said.
“It’s always something specific for each stop,” said Medina. 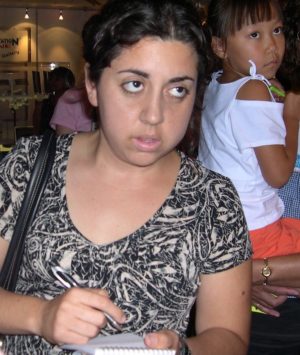 Medina’s been to Lieberman’s “office” – two seats in the back of the bus facing each other with a table in the middle – several times for a private interview, she said.
Reporter Maggie Haberman, riding the bus for the New York Post, said she primarily covers New York politics, but recently began covering the Connecticut senate primary race.
Besides reporters on the bus, there are also some photographers, including Julie Stapen, who shoots for the New York Post’s Sunday edition.
Since Stapen was only on the bus one day, she was under a lot of pressure to get just the right picture.
“You want the perfect shot that symbolizes what’s going on,” said Stapen.
Stapen has to move quickly, but carefully.
“There’s a lot of pressure to be in the right place at the right time,” said Stapen, and to always be “aware of when an important moment is coming up.”
When she’s taking Lieberman’s photo, speed is crucial.
“If he turns around for one second,” Stapen said, she could miss her opportunity for a great shot.
Aside from making sure that she doesn’t miss any of the action, Stapen also has to be careful not to hurt anyone while pushing through the crowd with a big, heavy camera. This was especially hard when Lieberman stopped at The Children’s Museum in West Hartford, Conn., Stapen said, because there were so many little feet that could’ve been stepped on.
Being a news photographer is stressful because you’re competing with other newspapers and you’ve got an editor “screaming in your ear,” said Stapen. “It’s exciting when you get that perfect shot that can be meaningful to you and to someone else.”
In graduate school, Stapen said, she studied studio art.
“I learned the way things fit together and the way people fit together,” said Stapen. “The thing about being a photographer is that everyone has their own idea of art.”
Spending a few hours riding around in an air-conditioned Peter Pan coach with Lieberman was a very thrilling experience for me because loads of people will never get to do that.
The bus itself wasn’t anything extraordinary. Signs for the candidate were plastered all over the windows. 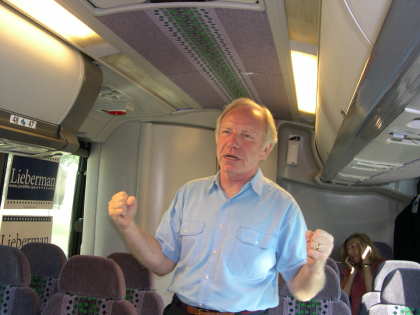 U.S. Sen. Joe Lieberman on his campaign bus shortly before a primary that may push him to create his own political party to stay in the race. (Kiernan Majerus-Collins/YJI)

It was the people on the bus that made it exciting. The inside of the bus was nothing to brag about, but hanging out with journalists from the New York press and with Lieberman himself was.
Life on the bus for working journalists, though, isn’t always a picnic.
Covering an out-of-state campaign is difficult, Haberman said, because she has a baby in Brooklyn. She said she was only riding the bus for one day, but will cover the race until the Aug. 8 primary.
Journalists traveling with the campaign don’t make their own schedules, but some ride with Lieberman every day so they don’t miss a thing.
The reporters follow Lieberman around all the time in case he says something new or different or in case something dramatic happens.
One hot August day, Lieberman’s bus stopped at a town hall, The Children’s Museum, where the senator introduced an egg dropping contest; a library – where Lieberman read to little kids – a senior center and a strip mall. With a small group of reporters and photographers tagging along, the senator wandered into a frame shop, gift shop and even a nail salon!
Journalists have to drag plenty of gear with them – laptops, cell phones, cool Blackberry gizmos with about 50 buttons, cameras and voice recorders – onto the bus with them.
Every day while riding the bus, Medina transfers the notes she’s jotted down in her pad onto her laptop. Medina, who recently moved to Hartford, Conn., said she’s worked for The New York Times for four years.
The New York Times has a different reporter covering Lamont and his campaign as well, Medina said.
So why has this Connecticut election drawn so much attention from newspapers like the New York Post and the The New York Times?
“Races in New York aren’t very competitive this year, which is why this race is so interesting,” said Haberman.

Wesley Saxena is a Reporter for Youth Journalism International. Kiernan Majerus-Collins took the photographs. Read a news story about the race here. 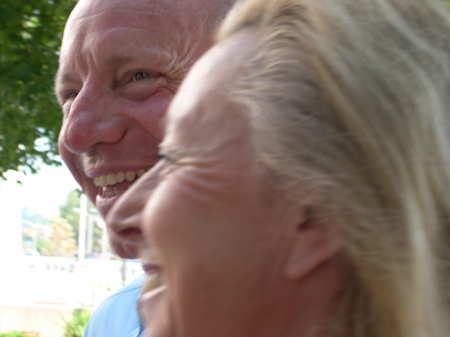 Joe and Hadassah Lieberman on the campaign trail. (Kiernan Majerus-Collins/YJI)