KARACHI, Pakistan – Pakistan’s political turmoil further intensified on Tuesday when the Supreme Court reserved its verdict in Prime Minister Yousuf Raza Gilani’s contempt case, paving the way for his possible disqualification from parliament and throwing into doubt his continuation in office.

A seven-member special bench of the court headed by Justice Nasir ul Mulk reserved the verdict in contempt of court case against the prime minister in the National Reconciliation Ordinance.
“The court will announce judgment in the case on Thursday,” Gilani’s counsel, Aitzaz Ahsan, told reporters outside the court. He later said that the maximum punishment that Gilani could face if convicted was six months in prison.

All eyes of the nation and the world are focused on the outcome of these proceedings now. Gilani has been indicted for refusal to put into practice a 17-judge full bench order of the court to write a letter to Swiss authorities for reopening of money-laundering cases against President Asif Ali Zardari.
Ahsan has contended that the letter could not be written as the head of state enjoys immunity from prosecution both within and outside the country. He further argued that Gilani had observed the rules of business and acted on the advice given by his legal team that the letter should not be written. 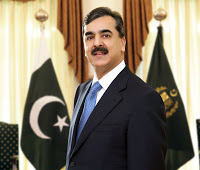 The apex court been pressuring the government to revive cases of alleged money laundering against President Zardari in Switzerland since December 2009, when it struck down an amnesty issued through a presidential ordinance by former military ruler Pervez Musharraf.

However, Gilani has refused to act. He had appeared in the court twice before and had decided to fight the case.
Even after he was formally charged with contempt of court on February 13, Gilani insisted that he would rather be jailed than approach the Swiss authorities to reopen the cases against the president.
Therefore, the judiciary has finally driven the ruling Pakistan Peoples Party to the arena of its choice.
If convicted, Gilani would be left with no alternative but to face contempt charges or take shield behind the presidential immunity.
Legal and political experts see the danger of conviction to Gilani.
So far, the PPP had settled down to protect neck of its co-chairman, Asif Ali Zardari, putting the largest party and its government, at stake.
But now, it should prepare for the worst.
There appears to be no escape for the cocooned PPP from writing letter to Swiss authorities, and even if Gilani fails to remain in office, it should be binding on the next prime minister to do so.
As observers have argued, if he is convicted, politics will take a new turn and the country will move further close to fresh elections.
Waleed Tariq is a Senior Reporter for Youth Journalism International.