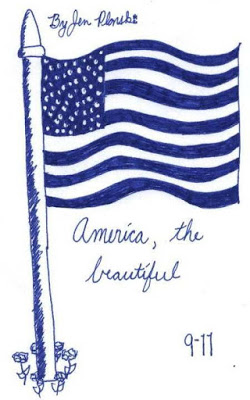 Jen Plonski, then a YJI student, drew this for the first anniversary of the Sept. 11, 2001 terrorist attacks.
GLENWOOD, Iowa, U.S.A. – I’m too young to remember the Sept. 11, 2001 terrorist attacks, but that awful day left my parents with enough memories for them and me.
Nearly 3,000 people were killed in the attacks on the World Trade Center in New York, the Pentagon in Washington, D.C. and those aboard Flight 93 who deliberately crashed the
plane into a Pennsylvania field rather than let it be used as a missile against another national target.

I’m still grateful and relieved that my family did not lose anyone that day. At the time however, my brother was 17 days old and my father was serving overseas as a Navy pilot.
I was a year and a half old.
My mom, my new baby brother and I were isolated, living in a small rural Minnesota town, hours away from extended family or friends.
When the planes hit the north and south towers of the World Trade Center, all my mom could do was watch the news unfold on television.  Years later, I watched the videos and they still almost don’t look real to me. We don’t often see attacks like this, except in the movies. 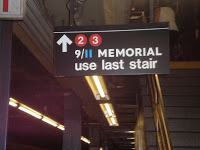 A photograph from 2011 showing what was then a new sign in the New York City subway directing people to the 9/11 memorial. (Emma Bally/YJI)

Moments after the second plane hit the south tower, my mom got an email from my dad saying he loved her – and that he didn’t know when he’d be able to talk again. He hadn’t even met his son.
One of the scariest things for my mom was not knowing what would happen next.  There were cases of anthrax attacks in the offices of U.S. senators shortly after the terrorists struck.
She later told me that she would leave us in the house when she walked to the mailbox – and then stayed outside to open the mail, just in case.
According to my dad, who was serving a six-month deployment, he was able to receive letters but it was difficult for him to write us regularly after the attacks. But he wrote letters to each of us that he set aside in case he didn’t return.
Last year, my family took a trip to New York. We were exploring the city when my mom said she wanted to show us where the Twin Towers collapsed. It is now more commonly called Ground Zero.
Where the towers once stood are two large, gaping holes.  The nearly 3,000 names of men, women, and children killed in the attacks are inscribed in bronze along the side of the memorial.
Within the original footprints of the towers are fountains where water falls endlessly into the smaller hole in the middle.
Being at Ground Zero is hard to explain to anyone who has not been there. Some people take photos and some touch the names, but nothing captures the monumental awe that you feel looking at where the buildings used to stand.
Garret Reich is a Senior Reporter for Youth Journalism International.
***
Support from readers empowers Youth Journalism International students to cover and reflect on the horrors of terrorism in the U.S. and around the world. Your tax-deductible gift helps give them a voice. Thank you.
HelpYJI.org