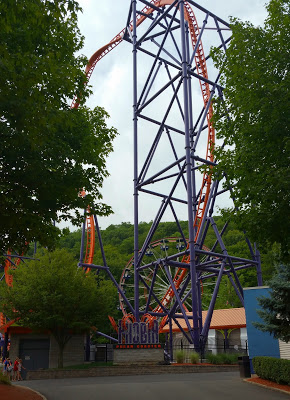 Reaching speeds upwards of 65 mph, Phobia races ahead of the park’s other steel coaster, Zoomerang. 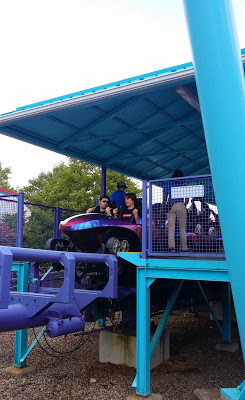 In contrast with the more intense over-the-shoulder-style seats on Zoomerang, the seats on Phobia may seem mild with only a lap guard, but don’t be fooled. The park’s newest addition is equally if not more thrilling than its older counterpart.

The coaster propels riders 150 feet upwards using a magnet system to store the energy created by the coaster, according to Jerry Brick, the park’s general manager. 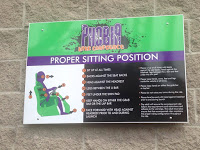 Signs outside of Phobia urge riders to face their fears – and instruct them how to sit safely. (Alan Burkholder/YJI)

This new system is able to dramatically reduce the total energy used by the coaster through reusing the kinetic energy it generates on its upward ascent, he said.

At the top of its 15-story journey, Phobia gives thrill-seekers a gorgeous view of the park, lake and surrounding wooded hills where the wooden coaster Boulder Dash makes its run.
From the top, it is possible to see the park’s historic wooden coaster, the Wildcat, and other attractions such as DownTime and multiple water slides as well as more chill rides like the Giant
Wheel and the Wave Swinger.
Then, a series of upside-down turns and a stomach-flipping drop interrupt the brief second of calm at the top.
In a trip that lasts about a minute, Phobia switches directions three times, keeping visitors on their toes all the while.
Mary Majerus-Collins is a Senior Reporter for Youth Journalism International.


Watch the video below to hear further explanation from Lake Compounce General Manager Jerry Brick about how Phobia saves energy:


And don’t miss “In search of stomach flips and plenty of speed: testing coasters at Lake Compounce” by YJI reporter Shelby Saunders.


If thrill rides aren’t your thing, try: “How to have fun at the amusement park, even if you don’t like rollercoasters,” by YJI Senior Correspondent Kiernan Majerus-Collins.

***
Your tax-deductible gifts keep students on track and this educational non-profit humming like a well maintained rollercoaster. Thanks for coming along for the ride!
HelpYJI.org