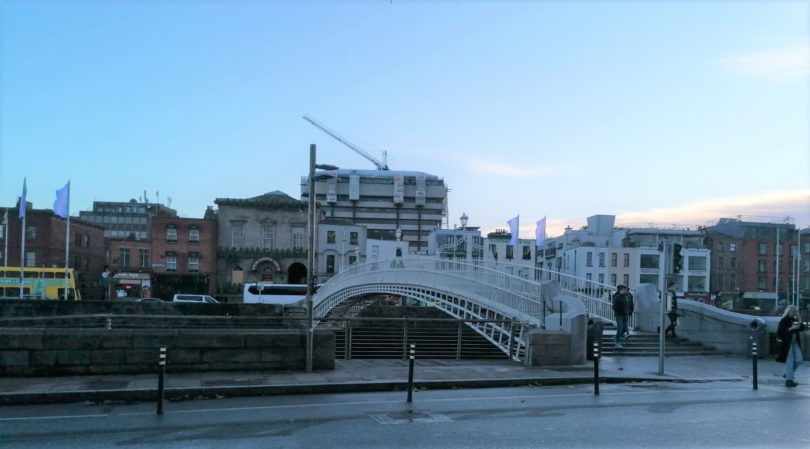 The Ha'Penny Bridge in Dublin, as seen from the Temple Bar side of the River Liffey. (Daniel Cleary/YJI)

DUBLIN – I recently read an article on how Dublin had been named “One of the Most Instagrammable Places in the World” for 2021.

I initially scoffed at the headline. What constitutes an “Instagrammable” city? I thought it quite a sad competition that sums up our generation pretty well. Everything easy on the eye, aesthetically pleasing, some would say fake.

I also felt a pang of sadness looking through all the beautiful cities placed in this competition. It served as a stark reminder that nobody will be travelling anywhere for pleasure for the foreseeable.

However, reading the Big Seven Travel website that listed the “Instagrammable” cities, I found the description that glorified Dublin. My cynicism began to turn to pride. I won’t back down, the headline is certainly corny and platitudinous. But at the same time, much of what they said about my city was quite endearing:

“Ireland’s picturesque capital belongs on everyone’s bucket list. Its plethora of medieval history, charming pubs, street art and lively culture are just a few things that make it an Instagrammer’s dream. Wander the halls of the world’s most epic library, aka, The Library of Trinity College and bring your #bookworm aesthetic full circle. And then clink a few pints of Guinness in the uber photogenic Temple Bar area. Either way, you’re set for some great shots to join in the 12.4 million others on Instagram under the #dublin hashtag.”

It’s easy to dismiss urban centers such as Dublin as a “concrete jungle.” Those of you familiar with Ireland will often associate beauty with the west coast. Its breathtaking Cliffs of Moher just one of the phenomenal sights to see along the Wild Atlantic Way.

When you gaze out to sea from those awe-inspiring coasts, the next stop is America.

But there is certainly beauty to be found within the old city walls of Dublin.

Dublin Castle is a sight to behold, along with the aforementioned Trinity College, housing the extraordinary Book of Kells, one of the most famous elaborate Medieval works in the world. Temple Bar is beautiful, if a little touristy. This gorgeous city is separated by the River Liffey, with its whopping 24 bridges crossing it.

A herd of fallow deer can be seen wandering around the Phoenix Park, the largest enclosed park in a European capital city. You won’t see deer in too many other capital cities.

So when the restrictions are finally lifted, Dublin is certainly a place that you should visit. There’s much more to this city than pounding back pints of Guinness.