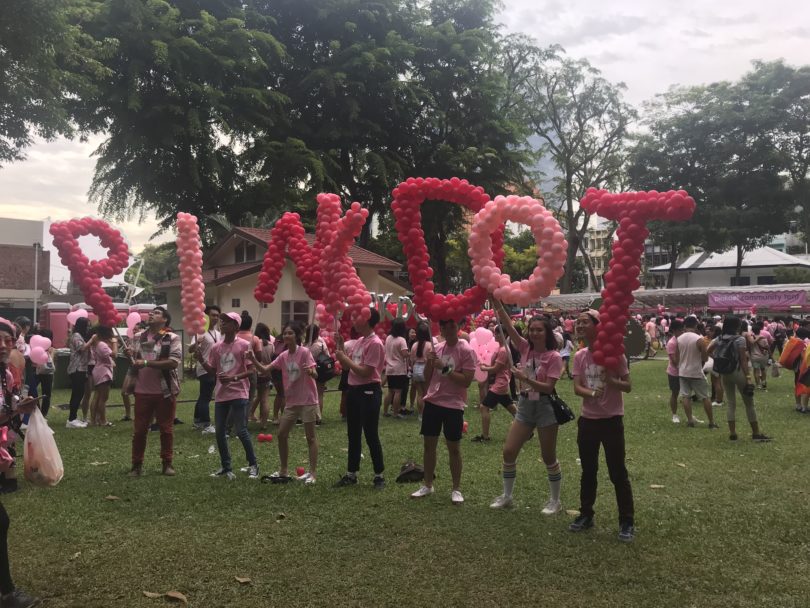 Supporters of rights for the LGBTQ community gathered at the Pink Dot 10 event in Singapore on Saturday. (Selvaganehsamoorthi Balakrishnan/YJI)

Saturday, in a rare display of public disagreement with the status quo, thousands attended the Pink Dot event at Hong Lim Park – the only place in the city-state where public protests are allowed.

Pink Dot – a play on the phrase “red dot” which is a nickname used to reference to Singapore – is a movement that calls for greater acceptance and rights for persons of the LGBTQ community.

This year’s event was euphemistically referred to as ‘Pink Dot 10’ – an allusion to its 10th anniversary since its beginning in 2009. Pink Dot 10’s theme was “We are Ready,” where local activists declared that Singaporean society is ready to accept the LGBTQ community.

“I think that we are now more open to talking about it. When the event first started, I remember lots of people were still quite disgusted by this kind of stuff. Now, people feel freer talking about it and people are generally quite accepting”, said Sagana – a student at a local university. 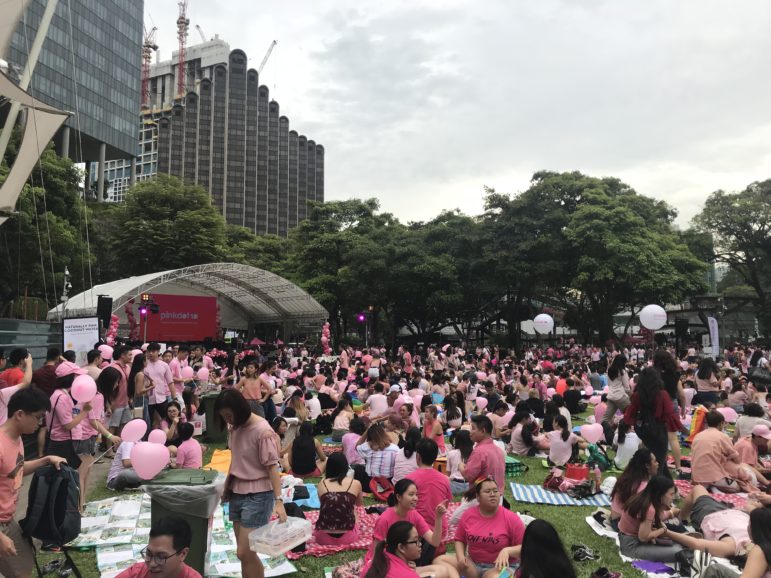 Some of the crowd at Pink Dot 10, an event supporting human rights for the LGBTQ community, held Saturday in Singapore. (Selvaganeshamoorthi Balakrishnan/YJI)

While the population may be more accepting of the LGBTQ community, the community still faces legal hurdles.

One of the ten declarations proclaimed by two popular local actors – Adrian Pang and Lim Yu Beng – called for the repeal of Section 377A of the penal code. This section is a legal vestige from the British colonial-era which criminalizes homosexuals acts between two men.

Over the past few years, challenges against section 377A were raised in the legal arena on grounds of it being unconstitutional. In October 2014, the Court of Appeal – the nation’s highest court – struck down the appeal citing that gender, sexual orientation and sex are not protected by the constitution. The government, however, has promised that it will not enforce section 377A.

“I’m happy to see many (people) here supporting the cause and people like us. Despite the recent bans, the crowd is still here,” said a soldier who declined to be named.

His statement was in reference to the 2016 ban of foreigners and foreign entities from funding and partaking in public demonstrations, including Pink Dot, by the Ministry of Home Affairs to deter foreign interference in domestic issues.

The gulf in funding left by the banning of foreign sponsors, including international conglomerates such as Google, Barclays and JP Morgan, was plugged by more than 100 local companies. Moreover, this is the second year where identity checks have been in place to prevent foreigners from attending the event.

Despite these hurdles, the park gradually filled as attendees, most of whom were in pink outfits, entered since the mid-afternoon opening of the gates. Live music and performances entertained the attendees who were seated on the lawn in front of the stage.

As dusk fell, Hong Lim park was full-house. At 8;30pm, a sea of pink illuminated the night with the year’s theme “We Are Ready” in the center in white.