TANGLEWOOD, Massachusetts, U.S.A. — Madonna’s “Confessions” tour made its way to Boston early in July, but elsewhere in Massachusetts, a more down-to-earth event was underway.
“A Prairie Home Companion,” a radio variety show that airs weekly on National Public Radio and Sirius Satellite Radio stations, hit the road Independence Day weekend, performing July 1 at Tanglewood in Lenox, Mass.
Radio host Garrison Keillor with actress Meryl Streep, left, and singers at Tanglewood.
I was really excited about this show because I often listen to it and I really wanted to see what the people who perform actually look like, especially host Garrison Keillor and Fred Newman, who makes all the wacky sound effects. 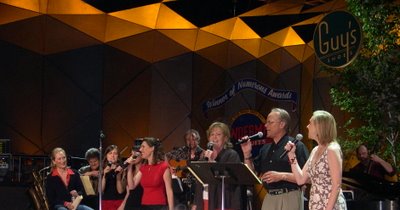 When we reached Tanglewood, Keillor was leading the crowd in singing the national anthem.
I was completely blown away at the size of the crowd. I never realized so many people listened to “A Prairie Home Companion.”
I knew that about 5,000 people could fit inside the Koussevitzky Music Shed where the stage was and there were about three times as many outside on the lawn!
Listening on the radio, I’d always pictured Newman as a short, mousey guy with brown hair and Keillor as looking almost exactly like the older brother in “Napoleon Dynamite,” with glasses, hair parted to the side and a small mustache.
Imagine my surprise when I saw that Keillor was tall and much older than I had pictured – totally different than what I thought he’d look like – but he did wear glasses.
Newman was not short, but had white hair and I recognized him from a show my little brothers watch.
Everyone in the audience was lucky because Keillor told a wonderful story about a Fourth of July celebration in his fictional Lake Wobegon and he had actress Meryl Streep as a guest.
Streep read poetry, sang and acted in some of the stories.
The whole show was broadcast live on the air, and later in a PBS television special.
To some people it may sound boring, just listening to country music and hearing stories, but really his stories are hysterical and his made up commercials for things like catsup and rhubarb pie are so weird you just have to laugh.
On top of that, when you add the amazing sound effects, listening to “A Prairie Home Companion” is a treat.
There’s also something soothing and pleasant about Keillor’s voice that makes you want to keep listening to him, even if what he says doesn’t make any sense.
His voice is almost hypnotic and it’s what lured all the people in the crowd to come to the performance.
Next time you feel bored out of your skull on a Saturday, give “A Prairie Home Companion” a listen.
Check out the show’s website to find out what radio station near you airs the program, or to find out how to listen to a webcast of the program.