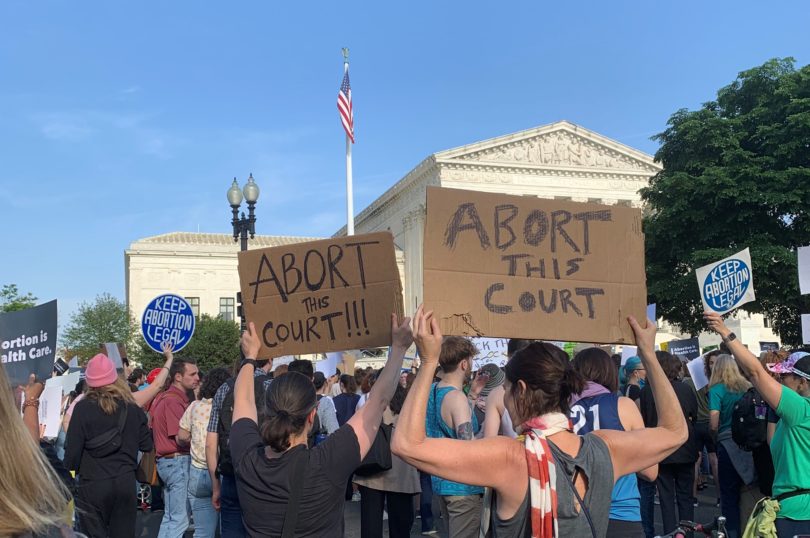 Protesters outside the U.S. Supreme Court on Tuesday. (Lyat Melese/YJI)

The crowd, diverse in age and gender and including activist organizations like Women’s March, appeared concerned not only about abortion but other reproductive rights such as contraception, LGBTQ rights and marriage equality.

“I was just so upset last night,” said Emily Nguyen, a student at George Washington University. She said that as a woman, the idea that she might not have a choice in abortion makes her scared.

A young woman at the protest, Nikka Bakhtiar, shared that her close friend had an abortion.

“I feel very strongly that [abortion] is a right that every woman and every person deserves,” Bakhtian said, holding a protest sign up into the air.

Other protesters showed their support for abortion rights as a family. Michelle Peterson, a resident of Maryland, drove to Washington with her two sons to attend the protest.

“I worry about my sisters in other states,” Peterson said. “They are going to lose access to significant amounts of health care because of the [abortion] facilities closing.”

Many at the protest were also concerned about the impact overturning Roe v. Wade could have on other causes that impact them.

Several speakers emphasized the disproportionate impact of the decision on low-income and marginalized communities. Protesters drew connections between the causes by carrying signs in support of LGBTQ rights, for Black Lives Matter and for women’s rights.

“The decision to overturn Roe v. Wade is only the beginning,” Bakhtiar said. “If we don’t fight for our rights now, we are going to be fighting for many more rights in the future.”

If the Supreme Court justices follow through, it will move the nation politically toward the right, putting reproductive rights, access to contraception and LGBTQ rights at risk, according to Peterson.

“I definitely believe that this is the first stepping-stone of the agenda to clamp down on reproductive rights,” Peterson said.

For activists, the decision to overturn Roe v. Wade is a wake-up call and a threat to other rights for women and marginalized groups.

“We are now in an environment that doesn’t feel very safe,” Nguyen said. “The fact that it is federally decided makes it even scarier.”

Lyat Melese is a Senior Reporter with Youth Journalism International

Ann Arbor, Michigan, U.S.A. – It has been said countless times by abortion advocates and health providers that banning abortions does not mean they will happen less, it just means they will be less safe.

When those without the ability to travel out of state or seek medical care cannot get a safe abortion, there is often only one prevailing option; to find unsafe, under-the-table procedures and risk hemorrhage or infection.

If the Supreme Court overturns Roe V. Wade, it will lead to more, not less death.

Abortions will still happen. But they will be more dangerous, and sometimes fatal.

About 45% of all abortions provided in the world are performed under “unsafe” circumstances, according to a 2017 report published in the medical journal The Lancet. And countries where abortions are outlawed are more likely to host these unsafe operations.

According to an estimate from the World Health Organization, between 22,8000 and 70,000 women die annually from botched abortion procedures. Not only that, but between 2 and 7 million suffer long-term health impacts.

Those numbers are staggering. Millions have been

injured or killed because our government refuses to allow proper healthcare. When anti-abortion advocates say they are pro-life, they are lying.

What is pro-life about denying healthcare and causing this much death?

The fact is that abortion is a medical necessity for a lot of people. Not a crime, but a life-saving, vital aspect of health-care.

For victims of rape, people whose pregnancy may be a risk to their health, and people who are not in a place to raise a child in a safe way; abortion saves. Whether it be by saving a woman’s life or preventing future suffering.

When politicians and judges completely criminalize abortion without providing any flexibility for those who may be at higher risk, they show disrespect for human life.

They are knowingly killing tens of thousands of people who will now have to turn to unsafe abortions.

Women are dying every year with moderate abortion regulations. How many more will die if Roe V. Wade is overturned?

And why doesn’t our Supreme Court care?