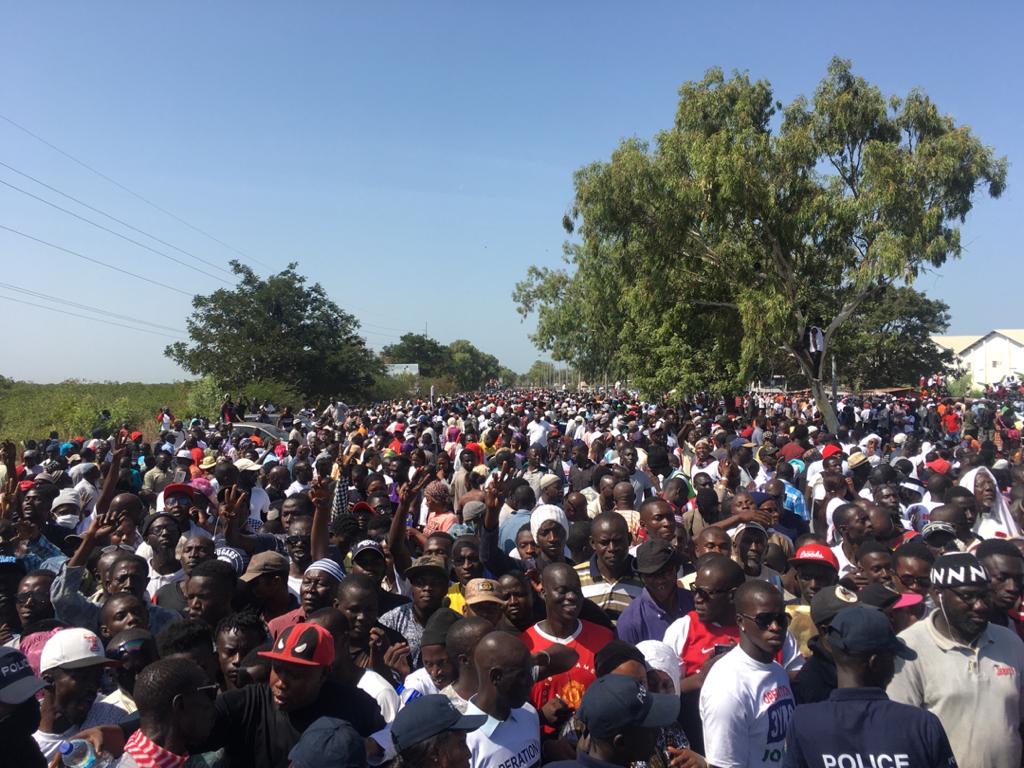 Protesters outside of Banjul, The Gambia. (Lama M. Jallow/YJI)

Banjul, THE GAMBIA – Carrying placards and banners reading “Three years, Adama Barrow must step down’ and “Gambia Is Not A Bus And Does Not Need A Five Years Bus Driver,” peaceful protesters numbering in the thousands marched recently just outside Gambia’s capital city.

The marchers represented the group 3-Years Jotna, which means three years up. They aim to pressure President Adama Barrow to step down as he promised when he took office in early 2017.

What started three years ago as a hopeful change towards democracy and accountability in The Gambia is now perceived by some to be a threat to the democratic future they fought for in 2016.

Hagie Suwaneh, the public relations officer for 3-Years Jotna, said the group will go back to the streets and force the president to resign if he does not do so by January.

Besides the thousands who make up the 3-years Jotna group, other Gambians are part of an opposite group called 5 Years for Peacebuilding, that supports giving Barrow two more years.

Some Gambians are concerned that the rift between the two groups could bring trouble to the young democracy.

After the previous dictator’s 22-year rule, Barrow’s government is trying to address the human rights abuses of the prior regime and other initiatives. The Gambian constitution says the president is to serve a term of five years, but Barrow took office under an unusual agreement that he would serve only three years.

Before Barrow’s December 2016 election, seven political parties came together to form a ‘Coalition Party’ and anonymously elected Barrow as the leader.

On learning the election results, thousands of people came out to the streets to celebrate and embrace their new democracy, their newfound freedom and the realization of change after years of hope.

Inauguration day – Feb. 18th, 2017 – saw one of the biggest crowds in the history of The Gambia as people crowded Independence Stadium to hear their newly elected leader give a speech and wave a good-bye to 22-years of repressive rule under Yahya Jammeh’s former regime.

The immediate joy was soon tempered with tension, as Jammeh began to deny the results of the election and indicate he wanted to continue to hold power. 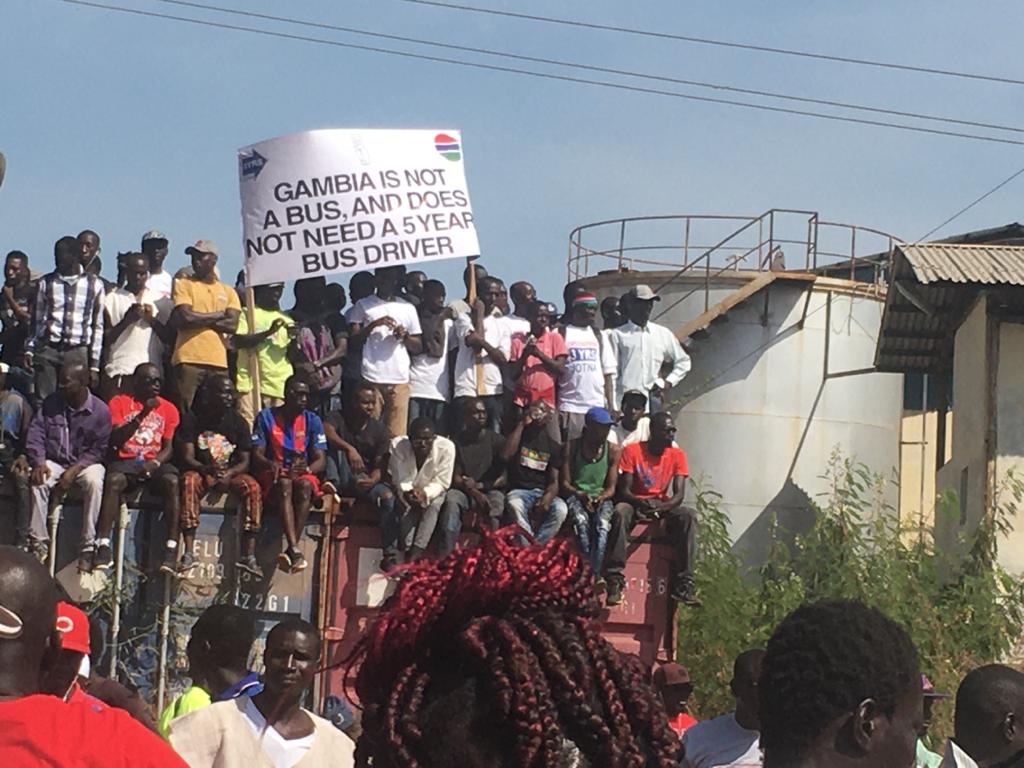 Youth sitting on top of a container raised a placard reading, “Gambia is not a bus, and does not need a 5 years bus driver.” (Lama M. Jallow/YJI)

Before the election, the Coalition Party agreed that if they won, their leader would only serve for three years to allow for the next peaceful election.

Many of the thousands of people who came out to protest in recent weeks said they were convinced by this agreement and that is why they voted for the Coalition Party.

Foday Sanneh of Sukuta, one of the protesters in Banjul, highlighted some of the reasons.

“When we were looking for this country, we agreed that when we win, the president will serve for only three years. When these three years are served, he will return the country to the citizens for another election,” said Sanneh.

The Gambia is a democratic state, giving citizens the right to demonstrate and exercise their political rights and to hold the government accountable and remind them of their promises.

“This is the three years which has already expired and therefore we came out to have a peaceful march to go and ask the country from the president,” said Sanneh. “His time is up and he should give back the country to us.”

Barrow’s stated desire to serve a five-year term is seen by these protesters as being a ‘traitor’ to the agreement of 2016.

Sarjo M. Darboe, the youth coordinator for the United Democratic Party of the West Coast Region, is not happy about how some Gambians are trying to put all the blame on the party for the protesters’ threats of force.

The party is peaceful, united and democratic, Darboe said, and not in any way involved in issues of violence or the idea that they are supporting the 3-year Jotna group. 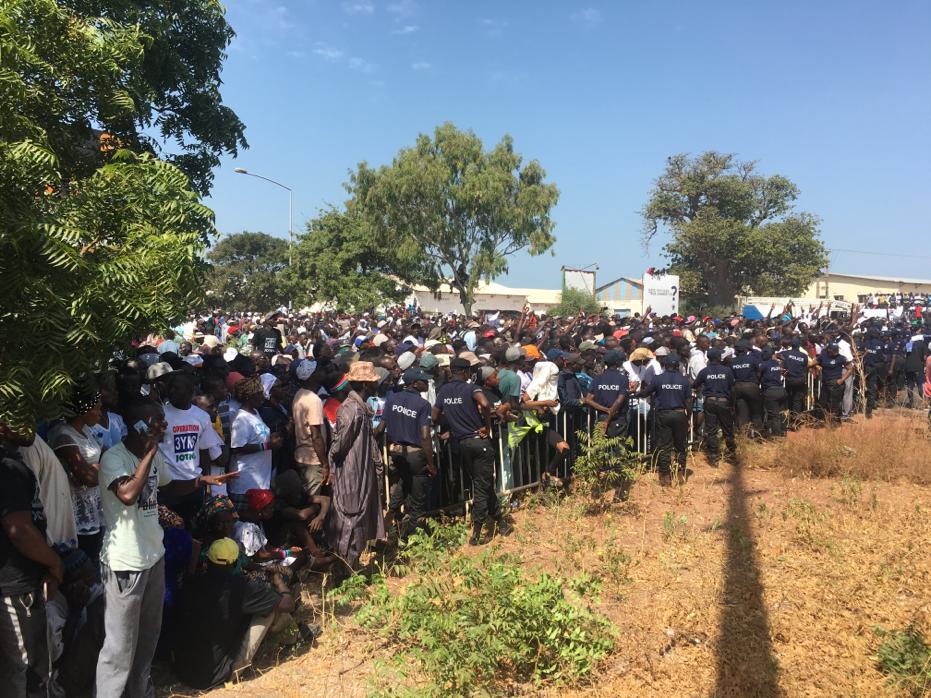 “It is the right of all Gambians to protest against their government,” said Darboe, adding that if the “party supporters choose to ask Barrow to step down after three years, that is their right as ordinary citizens. After all, the president promised them three years and people should not say the party is behind the protest.”

The party has since distanced itself from any involvement and also urged its supporters to follow suit.

Some Gambians, like Brusubi businessman Bubacarr Tunkara, are fine with Barrow’s five-year plan.  Tunkara opposes the 3-years Jotna group and defended the idea of Barrow staying in power.

“The coalition party by then had an agenda to take the country from the former president, Yahya Jammeh, and it is because of this they said three years, which was not even written or signed but was only a verbal agreement thus, nothing concrete,” Tunkara said.

“Adama Barrow is our president, even if he said three years before and now changed and said five years, then his decision should be respected because he is our leader,” said Tunkara.

But then, some protesters say they will go to great lengths to get what they want. They gave Barrow and his government an ultimatum to resign or they will be back on the streets to take it ‘by-force.”

A date to ‘force’ the president to resign has already been set for next month, January, 2020. There are thousands of supporters on both sides and so as united as Gambians were in 2016, they appear to be divided now.

The uncertainty surrounding the upcoming month and new-year is growing stronger.

Will there be another exodus of Gambians seeking shelter in neighboring Senegal for fear that violence will erupt from such a protest? Is it possible that the president will accept the demands and resign peacefully, avoiding any backlash that could turn to violence?

These and many more questions are still unknown. 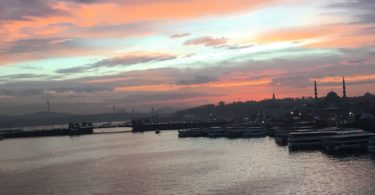