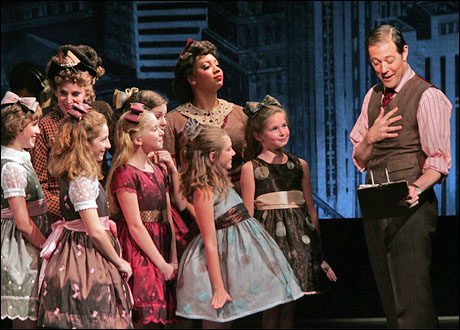 CHESTER, Conn., U.S.A. – In Radio Girl, almost everything is funny, even when six sweet girls with bows in their hair start speculating in song about another girl’s death.
Radio Girl, a new production of Goodspeed Musicals, is loosely based on the book Rebecca of Sunnybrook Farm. It’s the story of an orphan girl, Rebecca Winstead, struggling to survive during the Great Depression.
Her dream, which was the same as the one held by her late mother, was to sing on the radio.
A contest to find a girl to sing on the radio was the perfect opportunity for Rebecca, who was going through tough times, living with her uncaring stepfather.
In the song “Maybe She’s Dead,” the six little girls, who are contestants hoping to become the “lucky little radio girl,” are passing time pondering the whereabouts of Rebecca, who is their main competitor.
The show is a perfect mix of humor, excitement and romance. Part of what makes it fun is the lively dancing and clicking of tap shoes throughout the show.
The musical include a lot of upbeat tunes, but “Everything’s Gonna Be Good Again,” is especially catchy.
Gabriella Malek did a terrific job portraying the sickly sweet 10-year-old Rebecca, who was experiencing the effects of the Depression.
Rebecca’s stepfather, Uncle Harry, played by Joey Sorge, was the villain of the show with his devious, greedy, money-making schemes.
As the show progresses, the costumes, attitude, and lighting gets brighter, reflecting Rebecca’s increased happiness.
Lighting was used to create special effects, like making the neighbor’s property seem more cheerful than the farm where Rebecca lives. Lights were also used to make sparkles on the curtain.
One of the romantic parts of the show focused on the decades-old dispute between Rebecca’s great-aunt and her former fiancé who lived next door. When he didn’t show up for their wedding, she wanted nothing more to do with him and didn’t learn for 40 years that he’d merely gone to the wrong church.
“I thought she was a Methodist!” he wailed.
With good costumes, terrific acting, fun songs and a great storyline, Radio Girl is an excellent show.
Radio Girl plays at the Norma Terris Theatre in Chester, Conn., through August 22.