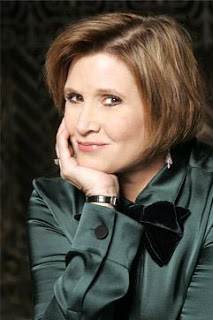 (From her official Facebook page)
MELBOURNE, Australia – We here in Australia woke to the horrible news Tuesday morning that actress, author and mental health advocate Carrie Fisher had died at the age of 60.

Although she is most famous for her role as leader of the rebellion – Princess Leia in the Star Wars films – this was only one facet of her working life.
Fisher is most famously known as an actor, playing many roles over her illustrious career. Her role as Princess Leia, a strong, determined, no-nonsense woman, was one that all women could admire.

But this was not her only role on the big screen. She was in dozens of films, including The Blues Brothers, Drop Dead Fred and When Harry Met Sally. She was also on the small screen, playing herself in “The Big Bang Theory” as well as other roles.
What is less known by the general public is that Fisher was also an author. She wrote many books, including an autobiography and both the book and screenplay for the film Postcards from the Edge. This year’s book, The Princess Diarist recalls her memories of what happened behind the scenes on the Star Wars set.
She was also a mental health advocate, using her fame to raise awareness of mental health issues.
Fisher had an unfortunate end to her life, suffering a heart attack only a few days ago and dying Dec. 27.
Her talents were adored by thousands and will be missed around the world. Rest in peace, Carrie Fisher.
Alyce Collett is a Reporter for Youth Journalism International.
***
Stand on the side of youth and truth with a tax-deductible gift
in support of Youth Journalism International’s student writers and artists.
HelpYJI.org