CLEVELAND, Ohio, U.S.A. – When our parents told us they were taking us to the Rock and Roll Hall of Fame, we didn’t really know what to expect.

As it turned out, it was kind of boring and not much fun for kids. 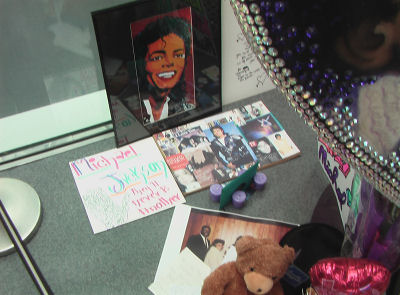 Tribute to Michael Jackson at the Rock and Roll Hall of Fame in Cleveland, Ohio this summer. (YJI)

While some things in the Hall were interesting and cool, the museum did not keep us occupied as long as our parents wanted to stay.

We were bored probably because we didn’t know the musicians there.

There was only one exhibit that one of us found exciting. Katherine saw three suits the Jonas Brothers wore on their album cover for “A Little Bit Longer.” To her, that was the best part of the whole museum.

The Jonas Brothers display involving musicians she knew was better than the whole six floors of unfamiliar artists.

For us, that was the whole problem with the Hall. Most of the musicians in the Hall we hadn’t heard of before. Older people who had grown up with these musicians and knew them and cared about them seemed to have more fun.

If you don’t know a musician or haven’t heard of him before, you don’t really care to go gaga over his clothes. It’s just a tattered old jacket. Why would we care?

Thankfully we had a deck of cards with us. We made sure our phone was on so our parents could call us if they needed us. Then we went up to the sixth floor and played card games for the next hour or so.

It was nice, because there were round benches we could sit on. One thing that was really neat was the gift shop. We bought a postcard and two commemorative pins.

After the museum part of the Hall of Fame closed, we went outside and played cards some more while we waited for our parents to get out of the gift shop.

All in all, the Rock and Roll Hall of Fame is worth the time to go and see. Just be sure to bring a deck of cards or a book if you’re not a rock and roll fanatic!

Mary Majerus-Collins is a Reporter and Katherine Holland is a Junior Reporter, both for Youth Journalism International.