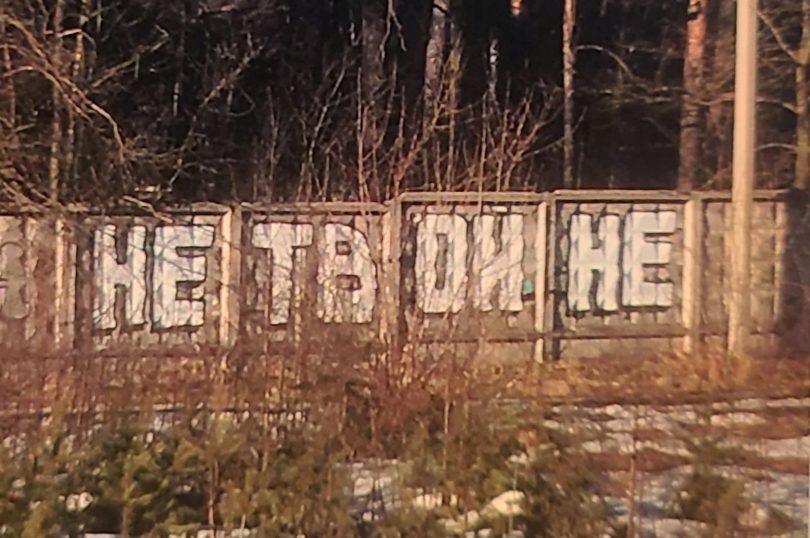 Graffiti in Russia. The words say, "NO TO WAR." (A Young Russian Citizen/YJI)

RUSSIA – I love Russia. I adore its culture, science and all its brave, strong, clear-thinking people.

I’m proud of all the progress my nation made for the world – literature, theater, music, ballet, cinema and feminism.

What great minds we had.

But I’m deeply ashamed and disturbed now by all the aggression from the head of Russia. These heartless bastards don’t even deserve to be called leaders.

Once so great and now so thin, the Russian soul is at its deathbed – skinny, devastated and apathetic – while our relatives are dying on both sides of the front.

Some people here still have the damn nerve to doubt what is real. Not thinking critically, they’re eating all the shit propaganda without chewing.

They are ordinary people, neighbors, family members, older people in the streets. They are out, walking and talking, comfortable in their beliefs, harboring no doubt about the lies they think are true.

I can’t believe these are the real people in my country pretending to be sane.

How can you not learn what is evil and what is good?

Some people who are brave enough to protest get arrested and charged with fines equivalent to an average monthly salary. The regime beats our boys and shaves their heads if they have long hair. Those people sexually harass and humiliate our girls.

I know that my school friend’s grandmother, who is a World War II veteran, got arrested not so long ago. She is safe now.

I bet officers beat their own families, too.

I don’t believe in God but I’m still praying for all of them, especially those who are losing their families right now.

I’m not an angry teenager – I get why it’s happening. I know my Russian mentality. Hundreds of years of tyranny and oppression. Domination by elite criminal groups made it impossible for people to think for themselves.

Don’t get me wrong – there are still many good people.

We are fighting every possible way we can. I believe someday we will rise from the ashes and shine like we never did before. Power to the people!

The author’s name and city are withheld for their own safety. That student wrote the essay and also took the photograph.

Parnian Shahsavary is a Senior Illustrator with Youth Journalism International. She drew the peace lillies.

Read more about the war in Ukraine:

This young journalist is from Russia. It is not safe to identify them here, so their name is being withheld.