Like anyone visiting New York City for the first time, my expectations were high when I set foot in the Big Apple last Christmas.

Little did I know how those expectations would be exceeded as I marveled at the sights and sounds of the city at Christmastime.

My first taste of true New York Christmas tradition was navigating the maze that is the Macy’s department store on 34th Street at Herald Square.

My mission: find and sit on the lap of one of the world’s most famous men. Yes, I’m talking about Santa Claus.

My journey through Macy’s eighth-floor Santa Land began when I entered a small room made to look like a train. On the walls were images from The Polar Express. 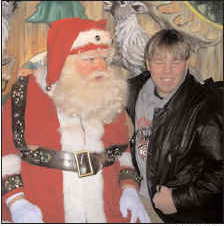 Leaving the train, I then followed a path through a glittering replica of the North Pole.

After several quick photo opportunities in front of oversized candy canes and gingerbread houses, I arrived at the cottage of the big man himself.

Now, I’ve seen some pretty good Santa Claus impersonators in my day, but nothing has ever compared to what I saw sitting in that department store.

The man who played Santa could have possibly been the real thing, if I didn’t know better. His hair was gray and he sported a real beard. His nose and cheeks shined a rosy red, and his red suit stood as a testament to the traditional Santa image, embroidered in gold string and soft to the touch.

So what did I wish for as I sat on Santa’s lap? World peace, of course.

After leaving Macy’s, I stopped at each outdoor display window and carefully inspected the scene inside. Despite the frigid temperatures, the windows – showing detailed scenes from the classic Christmas film “Miracle on 34th Street” – were worth lingering over. Each window displayed frozen moments from the film using richly decorated dioramas to tell the story.

My last stop in New York was at the gigantic Christmas tree that sat perched in Rockefeller Center – a classic testament to why the city is one of the world’s most desirable places to live and visit.

As music played lightly above the ice skaters below the tree, I stood in wonder. Large statues of angels and nutcrackers stood guarding the tree, some blowing silent horns as the lights on the tree shone brightly.

As I stood there, I began to understand why people love New York at this time of year. Santa, the big Christmas tree and the shop windows harkened back to a simpler time.

Even though New York is all about hustle and bustle, I found that sitting on Santa’s lap and standing under a Christmas tree while carols played could still make me smile and enjoy the quieter moments in life.