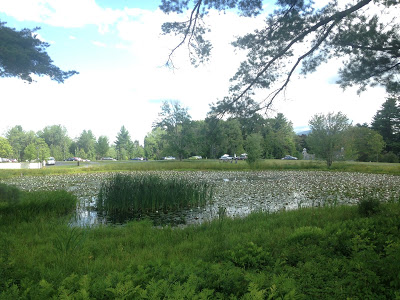 Schow Pond is a tranquil spot on the grounds of The Clark Art Institute. (Mugdha Gurram./YJI)
WILLIAMSTOWN, Massachusetts, U.S.A. – Van Gogh and Nature, the special summer exhibit at The Clark Art Institute, which runs only until Sept. 13, features some of the painter’s lesser known works and his focus on nature.

A Post-Impressionist painter, Van Gogh’s work contain dots and individual brush strokes that add texture and shadows.
His use of oil paints also adds texture to the pieces and the way the colors blend suggests uncertainty of memory. A piece that looks complete at a distance becomes
disassembled up close.

With the chance to see so much of his work up close and gathered into a single exhibit, viewers can follow each of Van Gogh’s strokes and imagine the flick of his wrist as he blended colors to create one living image.
In addition to pieces by Van Gogh, the temporary exhibit contains several Japanese wood-block prints owned by Van Gogh. One of them uses a unique technique to show the patterns of rainfall across the artwork. On display next to the print is a Van Gogh piece, possibly his last work before he died, showcasing his own attempts at mimicking the style of rain from the wood print.
Along with these wood-block prints, the exhibit also displays many of the other works that inspired the artist, including novels he owned.
It was interesting to see the influence of these works on his art. For example, Van Gogh’s artwork featured many more cypress trees after reading about them in a French novel.
The exhibit uses an intriguing arrangement of the work to put it in the context of Van Gogh’s life. It’s organized by the places he lived, beginning with a period from 1881 to 1885 in Holland, followed by his years in Paris, Auvers, Provence, Arles, Auvers and a hospital in Saint-Rémy he stayed in to address his mental illness.
Visitors can see photographs of the countryside that fascinated Van Gogh, and read about the different places he visited that add meaning to and shape his work.
In letters to his brother Theo, Van Gogh stressed the healing properties of the countryside. He often took long walks to find subjects to paint, and swore these would cure their shared illness.
Throughout his life, Van Gogh kept in touch with his brother, sharing with him his fascination with nature and dedication to his art, which kept him going in his battle with depression.
His time spent at the mental institution, where Van Gogh painted many of his best works, proved to be one of great creative productivity.
Van Gogh and Nature, which opened in mid-June, closes September 13 so there is still time to see it.
Over Labor Day weekend, the museum is holding special extended hours just for the Van Gogh exhibit. While the entire museum is open daily from 10 a.m. to 5 p.m., the Van Gogh portion will be open until 8 p.m. on Friday, Sept. 4 and open an hour early, at 9 a.m., on Saturday and Sunday, Sept. 5 and 6. Labor Day hours are 10 a.m. to 5 p.m.
Apoorva Sajan and Mugdha Gurram are Reporters for Youth Journalism International. Youth Journalism International students Mary Majerus-Collins and Laura Espinoza Jara contributed to this article.
***
Your tax-deductible contribution can help support this nonprofit at:
www.HelpYJI.org