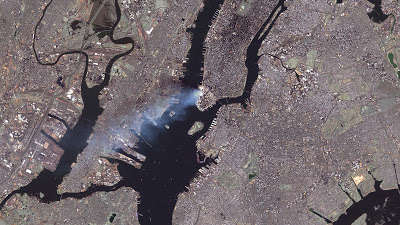 By Caroline Nelissen
Senior Reporter
Youth Journalism International
AMSTERDAM, The Netherlands – I still remember how I learned about 9/11. When my father came home, he immediately turned on the TV. On the screen, smoke was rising from two large buildings. My father phoned people, asking them if they’d heard. I knew it had to be serious.

I looked at the images of the burning towers, slightly confused. I saw burning buildings in movies all the time and didn’t understand what was so important about these ones.
Then, my father cursed.
“Look, there are people jumping out of that building!” he exclaimed incredulously.
My heart froze as I realized that some of the tiny dots on the television screens were actually people jumping to their deaths. Normal people like my parents who had just gone to work that morning, expecting a normal day. This was not a movie.
For some time, I just watched television as the news reports continued to repeat the same information over and over. It didn’t make the story they told any less horrific.
I don’t think there has been a news story in my lifetime where the images and reports have been etched in my memory to the same extent as the reports  about 9/11.

As a nine-year-old, I was thoroughly impressed with the severity of what had happened and the sense of threat that followed afterwards.

There was a lot of speculation about a possible Third World War and I spent days worrying that war would actually break out in my country.
Now, on a personal level, not much changed for me after that day. I hadn’t lost anyone close to me in the attacks and no war would be fought in the streets of my city in the months or years that followed.
But for millions of people around the world, 9/11 changed everything.
In a way, it seems strange to consider its 10-year anniversary more special than any other day.  What happened that day will not be less horrible next year, or the year after that.
However, I think it is good for us to remember this  day and the people who lost their lives.
It is a chance to honor their memory, but also to consider how what happened on that one day, 10 years ago, shaped the world we live in today.