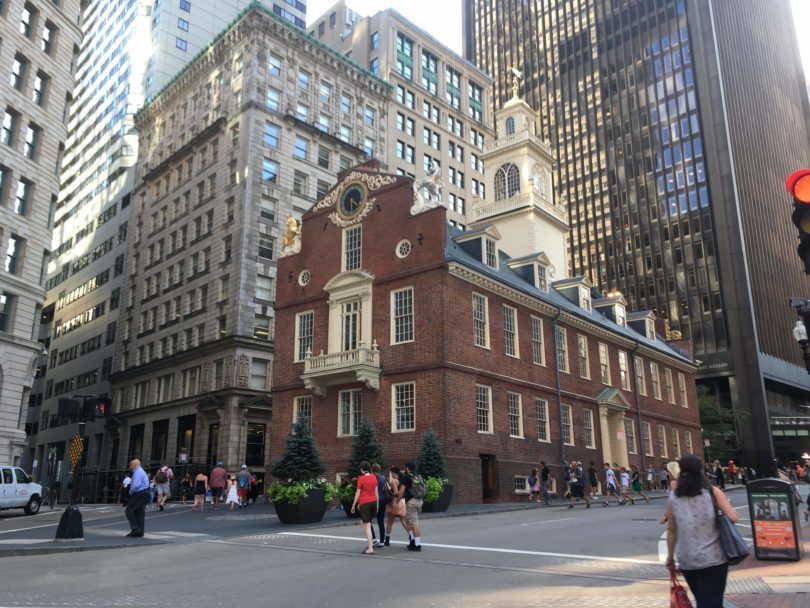 BOSTON – If you are near Boston, it’s possible to visit some of the most important places in the history of the United States in less than a day.  Three of us Youth Journalism International students did it together during our summer travels.

Before we arrived in the city, we joined with YJI student Yunkyo Moon Kim, who lives in Lexington. Together we caught glimpses of the historic Lexington Battle Green and the famous Old North Bridge in Concord, Massachusetts. 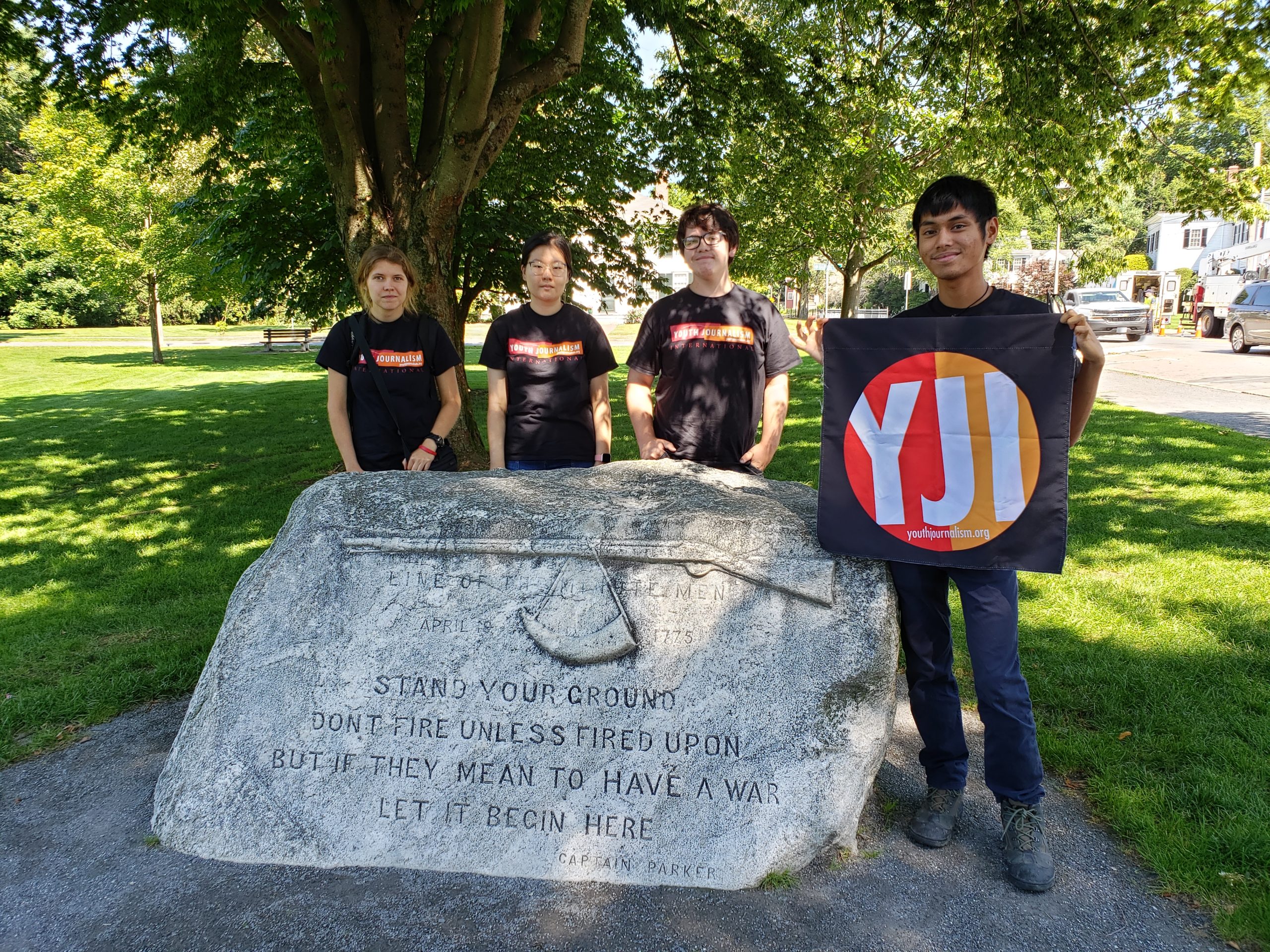 On the Battle Green in Lexington, Mass. with a rock that commemorates the words of American Capt. John Parker: “Stand your ground. Don’t fire unless fired upon. But if they mean to have a war, let it begin here.”

The Green in the small town of Lexington is where, in 1775, about 700 British troops advanced on fewer than 80 “Minutemen” from the colony. “Minutemen” were colonial soldiers who made up a militia. They were supposed to be ready at a minute’s notice.

Eight Americans died on the Battle Green, and more were injured.  One British soldier was wounded. It is unclear whether any colonist fired a shot. Afterward, the British advanced to nearby Concord in search of hidden munitions. 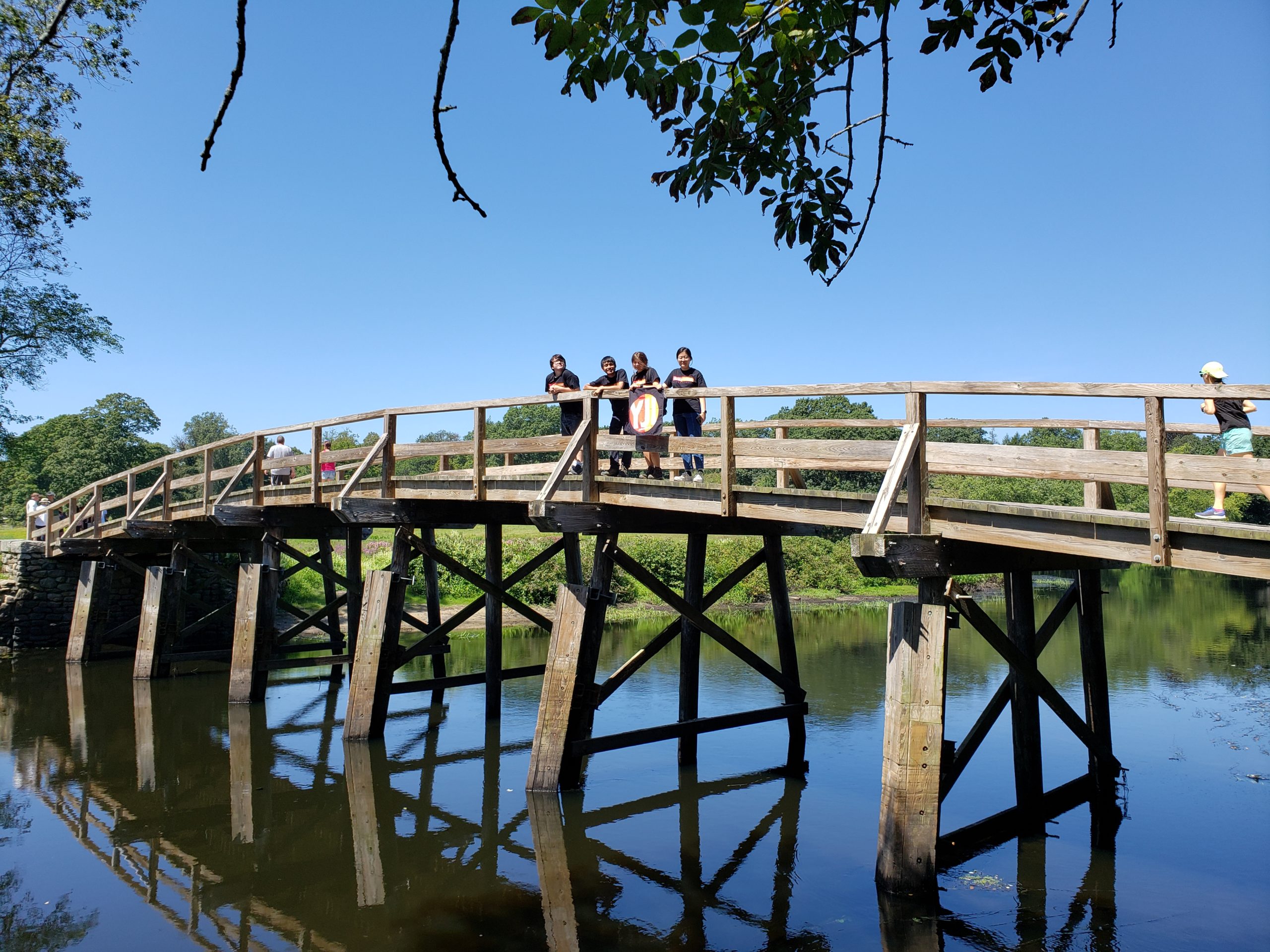 The bridge in Concord is the site of the “shot that was heard around the world” which marked the moment that Americans first fired back at the British and began fighting the American Revolution.

Once in Boston, we headed to Boston Common to begin walking the Freedom Trail.

Just before that, however, Ganesha Balakrishnan, Owen Ferguson and I received a quick lesson in American children’s literature. We heard the story of “Make Way for the Ducklings” written and illustrated by Robert McCloskey. The story revolves around a family of ducks that lived in the Boston Common pond. 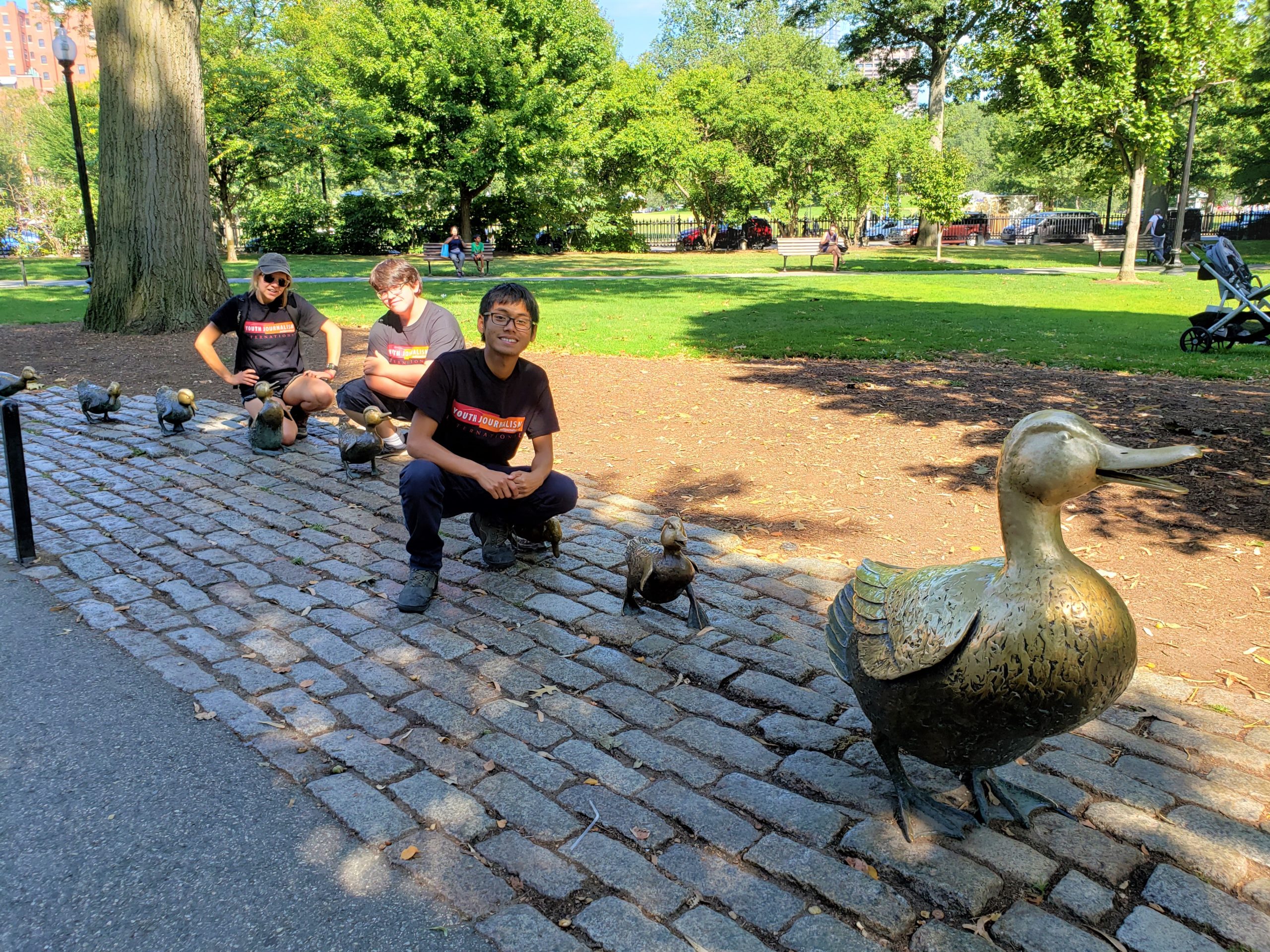 The ducklings story also features swan boats, which have been a popular attraction in Boston among tourists and locals alike. They’ve been in service in Boston’s Public Garden continuously since 1877.

We could not miss out on this vintage attraction, so we boarded a swan boat to get some rest before departing on our long walk around the city. 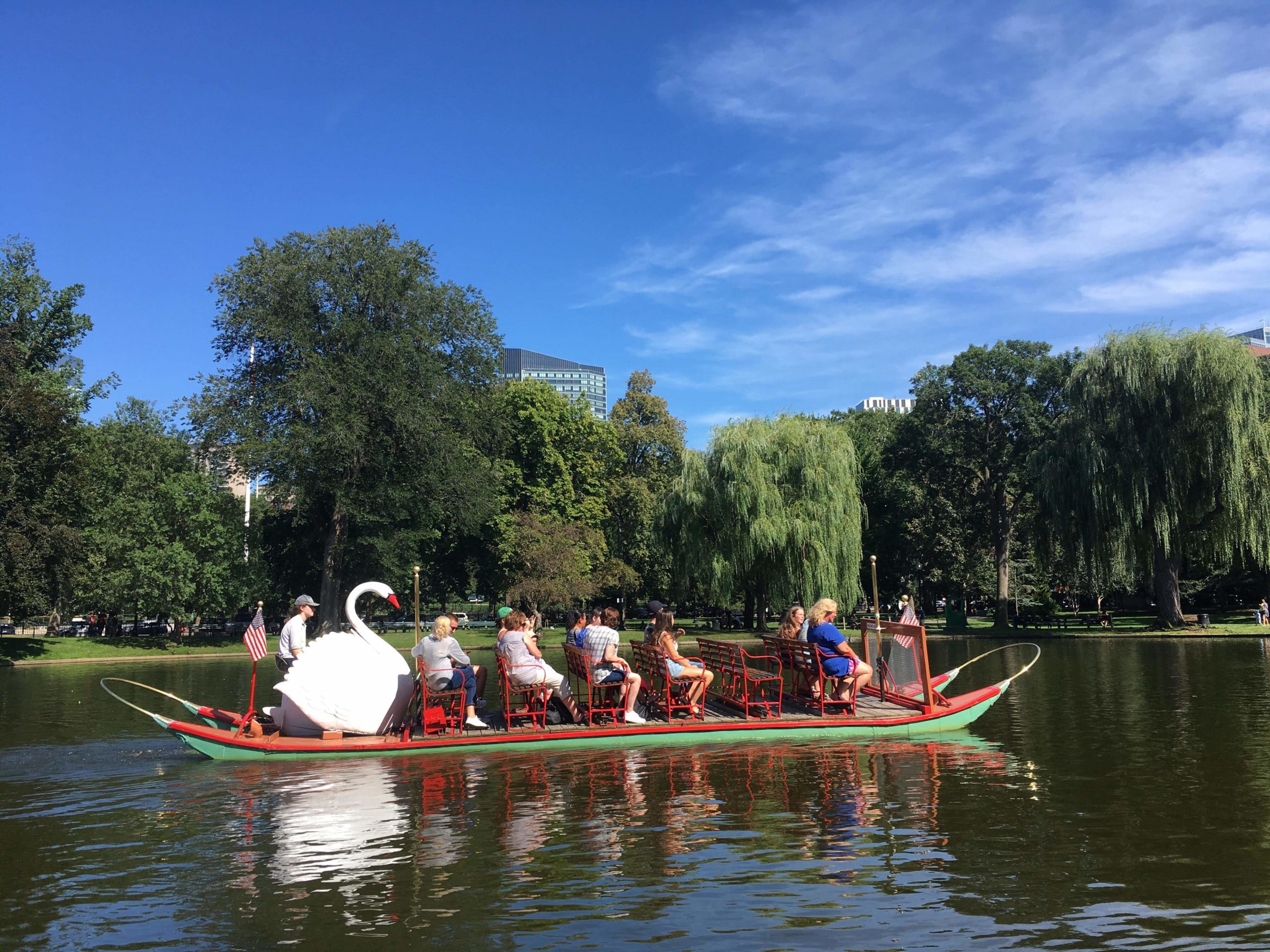 The Freedom Trail took up the rest of the afternoon and since the weather was hotter than the local average, we were relieved to enter Boston’s maze of shady streets. Having checked off the State House and the Park Street Church from our list, we spent some time at the Granary Burying Ground.

We found the tombs of early American revolutionaries Paul Revere, John Hancock, and Samuel Adams. One thing that drew my attention was how thin were the tombstones of other people buried there, compared with the 18th and 19th century cemeteries I have seen in the United Kingdom or Poland.

Another significant stop on the trail was the Old State House. It had once been the headquarters of the British colonial government in New England. This is also where the Declaration of Independence had first been read publicly to the Boston people on July 18, 1776, and where President George Washington greeted Bostonians in 1789 after the triumph of Americans over the British crown.

On a less cheerful note, the grounds right beside the House were the site of the Boston Massacre of 1770. The “Massacre” was named so by Paul Revere to demonize the British soldiers – who killed five civilian colonists there – and to stir up hostile attitudes towards the monarch.

I had the opportunity to enter the Old State House during my brief stop at Boston a week earlier. It hosts a small but time-worthy museum which holds some 18th century artifacts and free period performances. The most interesting part to me, though, was the interactive exhibit where you could smell different scents related to Boston – the molasses that was once produced here, the Back Bay dirt, or the smoke from the Great Boston Fire of 1872.

Next, our group walked over to Faneuil Hall. Nicknamed the “Cradle of Liberty,” it was the first Boston public meeting hall and the site of many protest gatherings in the 18th century that opposed the taxes imposed by the British.

The last two stops that we visited were Paul Revere’s house and the Old North Church. To get there, one must walk through the Italian district of Boston.

It was slightly bizarre to cross from the main street filled with pizzerias and cannoli shops to the side street and see one of downtown Boston’s oldest residences, once home to one of America’s Founding Fathers.

We went inside to look at the exhibition and some authentic furniture that long ago had been used by Revere and his family.

Finally, we proceeded to the monumental statue of Revere on a horse – one of the very many statues of men on horses scattered across the city. Then it was time to go back to the Common and reunite with our fellow student Yunkyo Moon Kim and meet YJI alum Rachel Glogowski for dinner.

Walking the Freedom Trail certainly gave me a much better understanding of the early history of the United States and the series of events that led to the American Revolution. In the short amount of time we had in Boston, we visited a lot of places that hold great significance for most Americans.

Boston also impressed me with its architecture, especially the way that modern and historical buildings mix together well despite the dramatic differences in function and appearance.

Two things I can say for sure – I really hope this was not my last visit to Boston, and at the end of the day I am very glad that we had the chance to stop there during our summer YJI journey. 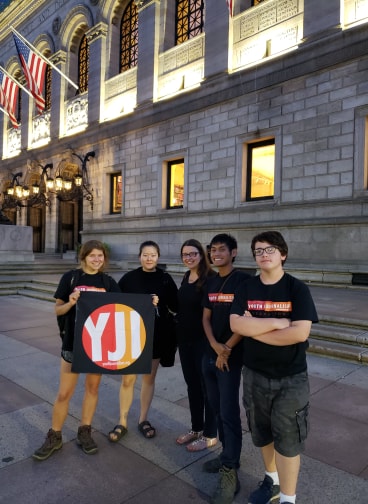