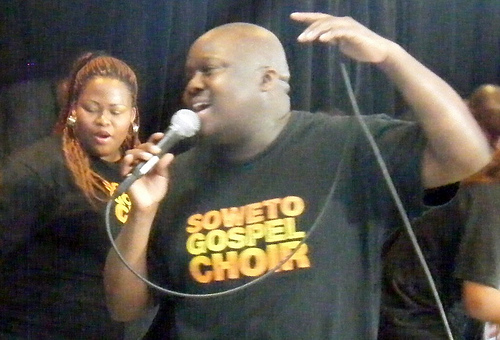 BRISTOL, Connecticut, U.S.A. — ESPN scored some soul recently when the Soweto Gospel Choir sang and danced at its campus.
It may have been the greatest performance ESPN has seen.
The world-famous choir, which sings the gospel music of Africa, is collaborating with the media giant to provide some of the music that will accompany ESPN’s coverage of the 2010 World Cup that begins in June. 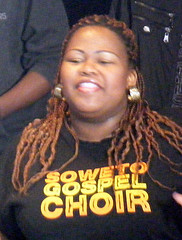 The choir gave a couple hundred ESPN employees a taste of its music last week – part of an effort to celebrate African culture and to convey the atmosphere of South Africa, the host country for the World Cup.
Jed Drake, a senior vice president who is coordinating ESPN’s World Cup coverage, called the concert at the ESPN Cafe a remarkable performance.
Jiyane Shimmy, the choreographer and conductor of the Soweto Gospel Choir, said of its collaboration with ESPN, “It’s amazing. It’s good for us, for our country.”
Claude Mitchell, coordinating music director at ESPN, said the Soweto Gospel will play a major role in the network’s World Cup coverage.
“We’ve been working on developing music ideas for the World Cup,” he said, that prominently include the choir.
The choir has won two Grammy Awards, and collaborated with Peter Gabriel on the song “Down to Earth” for the Academy Award-winning movie Wall-E. 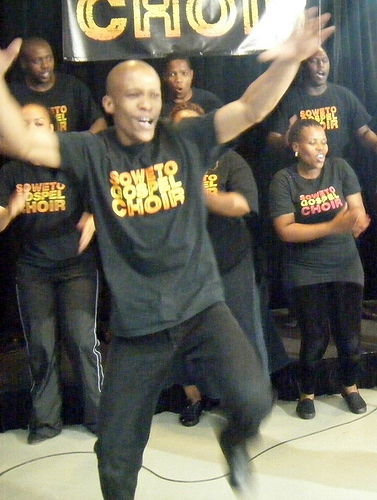 Yet another important performance is still to come: The choir will be singing the opening song at the World Cup.
Sipokazi Nxumalo, an alto and lead singer in the choir, said the group tours nine months a year and members worried they would be away during the international soccer tournament, but they are “so excited to be home for the World Cup.”
The choir is accompanied by a four-piece band in about 20 percent of its performances, Nxumalo said. At ESPN, only a beat from two drums called djembes accompanied the vocals.
“We prefer the audiences to hear the beauty of our harmonies,” she said.
The choir sings in six of South Africa’s 11 official languages, Nxumalo said.
Being part of the choir is hard work, according to Shimmy. It takes a whole day to choreograph a song, and that’s not including learning the intricate harmonies that abound within their work. But the choir isn’t complaining.
“You put a smile on someone’s face through song,” said Nxumalo. “That, for me, that completes me.” She has been a singer in the choir since its formation in 2002, she said.
Shimmy said he loves all his songs and praising God through song. His favorite part about going on tour is meeting the stars and learning from them, he said.
Nxumalo said the worst part of touring with the choir is adjusting to the different climates in the places where they go. They have learned to bring warm clothing and winter coats when touring in the United States.
But even if the temperatures are cold, the reception is warm. American audiences are the best in the world, Nxumalo said.
Wherever she performs, the best part of singing in the choir is “getting to change lives through song.”