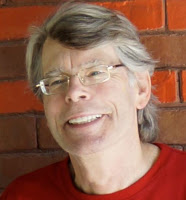 Stephen King (YJI)
HARTFORD, Conn., U.S.A. – A sellout crowd gathered at the Bushnell Center for the Performing Arts last week to be in the presence of one of America’s greatest authors, Stephen King.
Many of the people there were fans, but even those who didn’t know about him enjoyed the interview he had with WNPR radio host Colin McEnroe. The two entertained the crowd the whole time and seemed to answer everything the audience wanted to know.

King revealed even the darkest parts of his life in a positive light, making jokes the whole time. He talked with confidence and hope for the future about lapses into drug addiction, periods of withdrawal and even a horrible accident when he was struck and nearly killed by a van.
The crowd listened intently to the stories, hanging on his every word, and cheered whenever he so much as said the title of one of his books. He then mentioned what gave him the inspiration for some of his works and how he had started his career.
He had always loved horror books, sharing some of his favorite, chilling quotes, and started writing scary short stories while working as a high school English teacher.
King talked about books by other authors, too, including the Game of Thrones series by George R.R. Martin.
“They drag you in, you can’t stop, you can’t put them down,” he said.
This captivating interview with King made many want to read his books.
King donated his time to speak at the Bushnell as a fundraiser for the Mark Twain House & Museum in Hartford.
Yelena Samofalova is a Senior Reporter for Youth Journalism International.