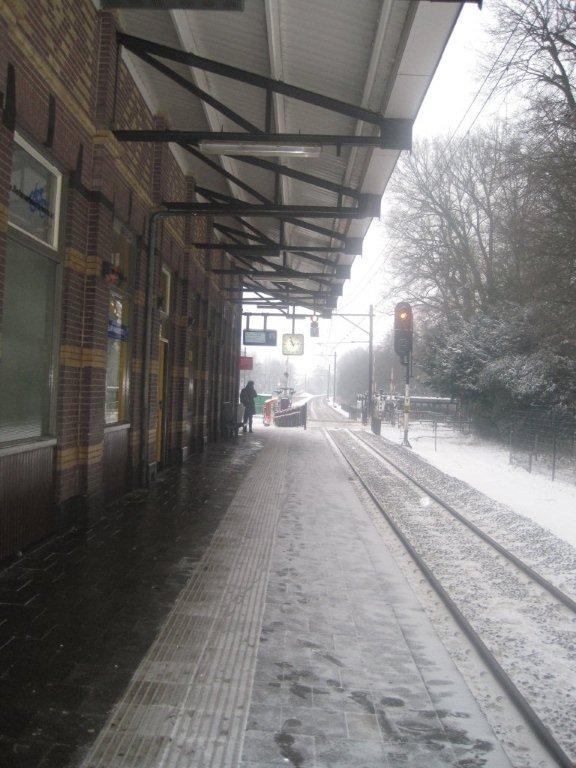 AMERSFOORT, Netherlands – Snow isn’t very common in the Netherlands, so when snow blanketed large parts of the Netherlands on Dec. 17, it wasn’t without consequences.
The snow did result in some very pretty pictures, and for some it was a great opportunity to get pelted in long-awaited snowball fights. But for people traveling by train, there wasn’t so much to be cheery about. 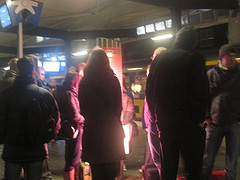 Due to the snowfall, chaos erupted in public transport in many parts of the country. Across the Netherlands, travelers faced long delays, and at some stations trains stopped running altogether.
By the late afternoon, it was practically impossible for trains to travel to and from Utrecht central station, the country’s main railroad intersection.
Many travelers were also stranded in the station of Amersfoort in the central Netherlands. Announcements of long delays kept piling up, until eventually all screens turned blank.
It was announced that the weather conditions had caused railroad switches to malfunction, making railway traffic to and from Amersfoort station impossible. Hundreds of travelers were left out in the cold, not knowing when the trains would start running again. 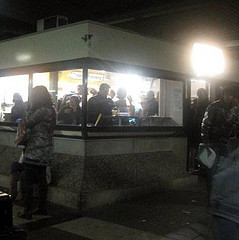 Waiting for new announcements, people congregated around the station’s heating poles for warmth. At the kiosk, people lined up for free coffee and tea, provided by the Nederlandse Spoorwegen, the Dutch Railways.
Shortly after a complete shutdown was announced, the motionless, yet heated, trains were opened up for the waiting people.
Tjet Blacquiere, one of the travelers stuck at the station in Amersfoort, traveled from Borne to Amersfoort. She said she had been dealing with delays all day. 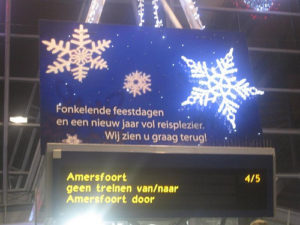 The banner above wishes travelers a happy holiday, but the electronic message board below says there’s no trains coming or going from the station. (Caroline Nelissen/YJI)

However, she did feel confident she would be able to make it home that night.
“The NS has a conveyance obligation,” she said. Blacquiere added that she found the situation quite ridiculous for a country that “calls itself developed.”
“It’s unbelievable. One day of snow and the entire public transport is shut down.”
There was an overall sense of annoyance, but everyone remained calm. People anxiously awaited information about trains to their destinations, but things remained unclear for a long time.
Around half past ten, trains gradually got going again. 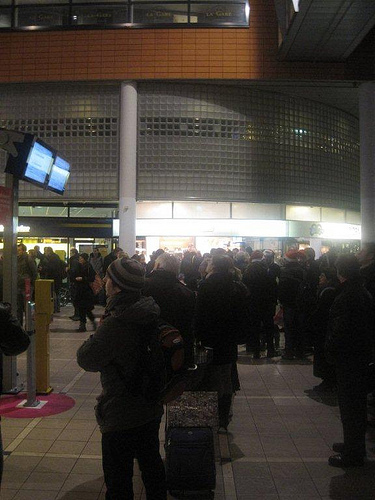