BRISTOL, Connecticut, U.S.A. — Actors in the fall play at Bristol Eastern High School are taking direction from someone new this year — a fellow student.
Kate Leber, a 16-year-old junior, is sitting in the director’s chair for this week’s production of “The Importance of Being Earnest.”
Leber is the first to take on the new task of student director at the school. 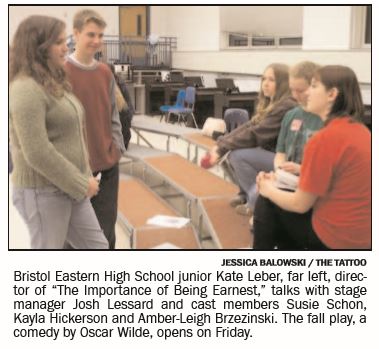 Cast member Heather Magnoli, 16, said Leber is a wonderful director. The cast couldn’t have had a better one, Magnoli said.
“The Importance of Being Earnest” is a Victorian comedy about two guys who do everything in their power to capture the hearts of two girls, with some complications along the way, naturally.
Leber called the play “an amazing show by Oscar Wilde.”
She was immediately drawn to it, she said, and “wanted to see it done.”
“The language is hilarious,” said Leber. “It pokes fun at the Victorian society,” she said, with verbal battles between characters intertwined in a “comedic love story.”
Leber played the part of Rebecca in Eastern’s production of “Our Town” last year and was involved in both musicals her freshman and sophomore year.
But she had never directed before.
To get the role of student director, Leber had to meet with Drama Club advisor Lisa Carol and go through an interview with the student officers of the club.
The interviewers asked the potential directors why they wanted the job. At her interview, Leber put on a puppet show and her creativity paid off.
Carol, who is in her second year of running the school’s drama program, said Leber was “very prepared, shows great compassion and is doing very well.”
The advisor said she thinks having a student director is a great way to let students see things from the other end and “look at a peer in a different way.”
Leber’s debut is also her last director’s role, at least for now.
She said she just wants to see how it goes from here and doesn’t know if she wants to pursue a career in this field.
Leber said she chose her cast of 12 from an audition open to all students at the school. Each potential cast member read a section of the script that Leber chose for them.
She said the auditions were her greatest challenge.
The casting call was the “first real step in directing but after that everything flowed,” said Leber. The most rewarding aspect of this journey, said Leber, was working with the cast as a director.
The 12 students involved seem to appreciate everything Leber is doing for them.
“She’s doing great!” said Susie Schon, a 16-year-old junior.
Leber said she worried at first about telling cast members what to do because so many of them are her good friends. But she said she is “totally respected as a director” by her peers.
“She makes it fun and easy to come to her for help,” said Schon.
Other cast members also praised Leber. They said she is doing a great job helping students with their roles, especially for such an inexperienced director.
Getting started was another challenge, Leber said, but she said it got easier with every rehearsal.
Kayla Hickerson, a 14-year-old sophomore, said Leber “has the trust of the cast.”
Leber’s hard work is paying off.
“It’s great to see the whole thing come together,” the young director said. She said she’s excited about opening night, but sad to see the show come to an end.
To other student directors, Leber had this advice: “Be very patient and enjoy yourself.”