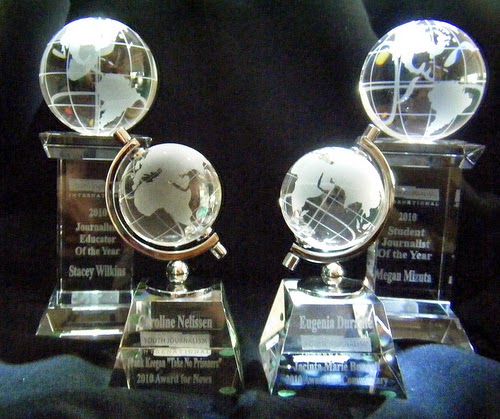 WEST HARTFORD, Conn., U.S.A. – Young writers, photographers and artists are encouraged to enter their work in Youth Journalism International’s sixth annual Excellence in Journalism contest.
The competition, open to teens worldwide, offers prizes in dozens of categories – everything from newswriting to cartoons. Special categories include Student Journalist of the Year, Journalism Educator of the Year and Courage in Journalism. Top honors are also awarded for the best news story and best piece of commentary.
“I’m always blown away by the variety and quality of the work that students do each year,” said Steve Collins, president of Youth Journalism International, a Connecticut-based nonprofit. “Those who say journalism has no future need to open their eyes.”
The contest, the largest anywhere for student journalists, showcases the best journalism in English anywhere on the globe. The contest is open to any journalist aged 19 or under. Only work by non-professionals – those who are not paid – is allowed.

In 2014, the contest awarded more than 100 prizes to student journalists from nine different nations in Africa, Asia, Europe and North America.
Student journalists who are 19 and under are eligible to enter work published in newspapers, magazines or on websites, or produced in a multi-media format such as radio or television
between Jan. 1, 2014 and Dec. 31, 2014. Independent work is also welcome.
Entries are submitted electronically and reviewed by an experienced group of judges made up of media professionals, experts and educators.
“Our judges carefully consider the entries and, in addition to make the difficult decisions about the winners, provide valuable feedback for students,” said Jackie Majerus, executive director of YJI.
Winners in major categories receive crystal trophies. All winners receive custom-made certificates.
Entries must be received no later than 11 p.m. Eastern Standard Time on Friday, February 6, 2015. No late entries will be accepted. Awards will be announced in May.
To enter, or to see more details, a list of categories, previous winners or bios of the judges, go to the Contests link at www.YouthJournalism.org.
Youth Journalism International is 501(c)(3) public educational charity recognized by the U.S. Internal Revenue Service. A non-governmental organization, YJI depends on donations to continue its important work training the next generation of journalists. To contribute, go to www.HelpYJI.org.
For more information, contact
Majerus or Collins at  editor@youthjournalism.org.
***
Your tax-deductible contribution can help support this nonprofit at
www.HelpYJI.org