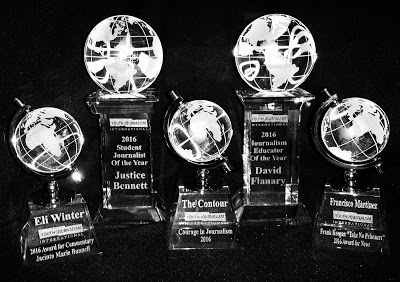 WEST HARTFORD, Conn., U.S.A. – For the first time, a radio news report captured one of Youth Journalism International’s top prizes in this year’s 2016 Excellence in Journalism contest.
A student reporter – Francisco Martinez of Alaska Teen Media Institute in Anchorage – earned the Frank Keegan “Take No Prisoners” Award for News for his piece on a new drug sweeping through the
community called spice.

Our judges called his conversational story “a nice contemporary take on the news” that shows how the growing multimedia field is capturing ever more attention from teen journalists.
Martinez is one of nearly 100 young writers, photographers and artists from across the globe who took home prizes in almost three dozen categories this year.
Justice Bennett, a senior from Malvern Preparatory School in Malvern, Penn., took top honors as this year’s Student Journalist of the Year, while David Flanary, a teacher at Sevier Middle School in Kingsport, Tenn., is the Journalism Educator of the Year.
A Houston teen, Eli Winter, got the nod for this year’s Jacinta Marie Bunnell Award for Commentary for his stunning eight-part series on LGBT issues in his community.
A new publication in New Jersey, The Contour from Lawrenceville School, snagged the Courage in Journalism Award.
Competition was stiff in nearly every category, with winners in 19 U.S. states and nine nations on five continents.
“As a judge, I can say without a doubt this year my job was incredibly difficult,” said Zac Brokenrope, an English teacher in Boston and Youth Journalism International alum.
The annual contest, now in its seventh year, recognized student writing and reporting, art, photo and multimedia skills in news, sports, opinion and other categories published or broadcast in 2015.
A panel of experienced judges evaluated the entries, which came from high schools and individuals from around the globe who write for school papers, blogs or other media. A handful are students of Youth Journalism International.
Hickman High School in Columbia, Missouri and Tennessee’s John Sevier Middle School took the most prizes of any school. They each won awards in 10 categories.
“We were especially wowed by the success of a middle school competing against older students from some of the nation’s most renowned high school journalism programs,” said Steve Collins, YJI’s board president. “Mr. Flanary is doing something right in Kingsport.”
Youth Journalism International has been educating the next generation of news professionals and talented teens since 1994. Formally incorporated in 2007, it is a 501(c)(3) educational non-profit public charity. Its website can be found at www.youthjournalism.org.
The contest covered work published in English between Jan. 1, 2015 and Dec. 31, 2015. Those eligible must be 19 or under and not working professionally.
For more information, please contact Jackie Majerus, Youth Journalism International’s executive director, at (860) 655-8188.
in Connecticut or write to yjieditor@gmail.com.
A complete list of winners is here.
***
Your tax-deductible contributions help the students
supported by this non-profit organization.
Thank you for being generous!
HelpYJI.org