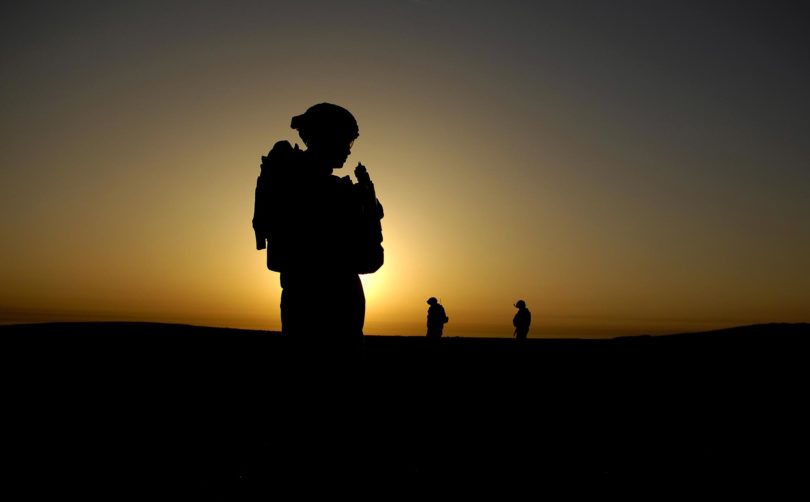 As the United States prepared to invade Iraq , some teenagers around the country and in Canada expressed skepticism about the war while others said they weren’t sure or thought the nation had no choice.

“War is necessary to ensure democracy and to ensure American’s goal against terrorism,” said Justin Garren, a junior at Bristol Eastern High School . He said a successful war would reduce the threat to Americans and the rest of the world.

But Waleska Cabrera, a 17-year-old junior at Bulkeley High School in Hartford , said she thinks that President Bush “is incompetent and Iraq is only a figurehead for war. Terrorism will always exist and preventing it” is going to be an everyday job for the country.

“September 11th should not have been the catalyst because war should not occur to stop violent acts,” she said.

“I think that something needs to be done so that Iraq will be rid of these weapons,” said Chu , a junior Granby High School in Norfolk , Va. She said if it means war “then so be it. War is not exactly the best or peaceful answer, but it is efficient. I think that Iraq is most likely capable of pulling something off that is even worse than 9-11. So, in that case, Iraq must be stopped.”

The Tattoo interviewed scores of teens in North America during the weeks leading up to war and found their thoughts on the prospect of war wide-ranging and occasionally provocative. Some were paying close attention to developments while others confessed that they either didn’t care or didn’t know what to do about Iraq .

“I don’t know what to think,” said Ivette Pereira, 16, an Eastern junior.

Krista Duprey, another Eastern junior, said before the bombs started dropping that “I really don’t care” about the war. “Maybe I’ll care when it starts.”

But most teens were ready to take a stand.

“I don’t necessarily agree with war, but how else do you negotiate with a dictator like Saddam Hussein?” said Maryanne MacLeod, 18, a senior at St. Thomas Aquinas Secondary School in Oakville , Ontario .

She said wondered how long the world could wait for Iraq to confess to the arms that its leaders have collected. “Hussein is a dictator and tortures his own people, so what other action do you take? What is the option?” MacLeod asked.

“Waiting on them is jeopardizing our country’s safety,” said Michele Roach, a 16-year-old junior at Bulkeley High. “They can attack us again and we wouldn’t see it coming.”

Both the United States and Iraq acted childish as war approached, said Junelle Jordan, 17, a junior at Granby High. She said war wasn’t needed to solve the problems between the two countries.

“If people would just compromise with one another, everything would go well instead of people wanting everything their way and not caring about others’ feelings and issues,” said Jordan . “Violence is not needed, in my opinion.”

But, she added, “All my prayers [are] with those who get drafted into this horrible thing and all my prayers to the families and everyone who is involved or affected.”

Kiera Sullivan, a 17-year-old senior at Eastern, said she’s anti-war and can’t see why the U.S. needs to be in charge. She said that other nations should handle it.

Bulkeley junior Audrene Dias, 16, said she wasn’t sure what America should do. She said she thought inspectors needed more time, but said she worried that Iraq could have used the time to plan its own attack.

Leslie Hambert, a 16-year-old junior at Bulkeley, said she thinks “Saddam is really hiding weapons of mass destruction and he should be a man and show it so people could live in peace knowing that they are not going to die today or tomorrow because of his weapons.”

“I feel Bush wants to go after Iraq for the wrong reasons,” said 17-year-old Denise Rodriguez, a Bulkeley junior. “He only cares about oil and doesn’t think of the innocent lives that will be destroyed.”

“Oil is a corrupt reason, but why we are going,” said Nick Stoyas, a sophomore at Warren High School in Illinois . He predicted a year-long war “which we will eventually win.”

“It’s not about oil,” said 17-year-old Jessica Stepp, an Eastern senior. She said she doesn’t necessarily agree with the war, but Hussein has been “killing his own people” and there’s a good argument for stepping in to stop him.

” Saudi Arabia has weapons that have to be disarmed, but because they are an American ally, Mr. Bush doesn’t care,” Clozza said. She claimed that Bush just wants to pick a war with someone.

But Peter Banks-Kenny, an Eastern student, said the war “needs to happen” because Hussein is insane, though he would have tried harder to negotiate before launching the invasion.

Teague Neal, a 14-year-old freshman at White Oaks Secondary School in Oakville, Ontario, said that war “should be carefully thought out with detailed steps of action that move ahead piece by piece, as Saddam Hussein does possess nuclear weapons.”

He said that the Iraqi military machine is “beyond anyone in the western world’s perceptions.”

“I think that we should go for it,” said Beckie Demers, an Eastern junior. “if we don’t then who knows what other country will try to walk all over us. I mean we are the strongest nation and we have to stay that way.”

Lily Ocran, 17, a senior at St. Thomas Aquinas, said that America “should go to war because we should stop Iraq somehow.”

Ocran said that war would, sadly enough, be the only way to stop Hussein.