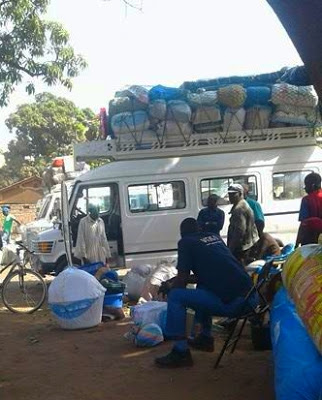 Foreigners pack up their things on top of vehicles ready to leave The Gambia, fearing political unrest. (Lama Jallow/YJI)
SERREKUNDA, The Gambia – People here who have never experienced war will witness a huge moment in the country’s history on January 19, when Adama Barrow, our new president,
is supposed to take office.

The trouble is that President Yahya Jammeh, who lost the December 1 election to Barrow, is refusing to step down after holding power for 22 years.
Jammeh initially accepted defeat, surprising Gambians given that Jammeh had once said he would rule for a billion years.
But sadly, he went back on his decision to step down by nullifying the results and strongly rejecting the election outcome, claiming some abnormalities at the polls.

This caused a stir and prompted other African leaders to intervene while citizens are growing fearful of what could happen if there is no resolution when Jammeh’s term expires Thursday. 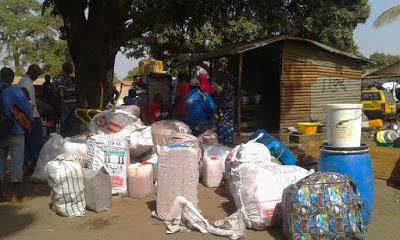 Belongings of foreigners who are preparing to leave The Gambia, packed in bags ready for transport out of the country. (Lama Jallow/YJI)

Delegates from the West African regional bloc, known as the Economic Community of West African
States, arrived in the country January 13 with a hope of settling the problem.
The delegates were African heads of states: President Muhammadu Buhari of Nigeria, President Ellen Sir Leaf Johnson Sirleaf of Liberia and former President of Ghana John Drahami Mahama, who accepted defeat in the Ghana elections in December 2016.
The national leaders initially gathered last month in The Gambia to try to help settle the problem, but failed to persuade Jammeh to hand over power peacefully.
An official letter from Barrow said that meeting had no “productive results.”
After that, Barrow was invited to attend the summit that just ended in Mali with French and African leaders. Among other issues, they were to discuss Gambia’s situation. Gambians are eagerly waiting for what their president-elect will say after the summit. 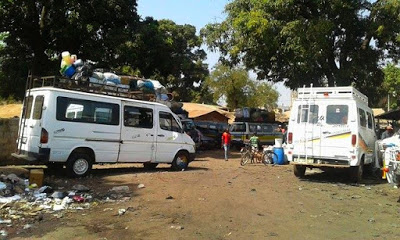 Vans that will take people out of the country. (Lama Jallow/YJI)

Jammeh wants the a new election, but Barrow and supporters of his coalition party strongly reject this idea.

The elections have divided the country along ethnic lines. The Jola ethnic group, which includes Jammeh, fears an attack from the Mandinka ethnic group, which includes Barrow and many supporters of his incoming coalition party.
Gambians hope for a peaceful transition but the country is filled with weird speculation about the future.
Foreigners, including those from Guinea, Liberia, Senegal and Sierra Leone, are going back to their respective countries, fearful of a similar situation that befell them in the wars in Liberia and Sierra Leone.
Gambians are also on the move but mostly not out of the country. They’re seeking refuge in their home villages where they have relatives.
Serrekunda – the busiest city due to its big market– is witnessing a drastic decline in its busy population, which includes many foreigners.
“It’s a terrible situation and am disappointed if at all Jammeh will prefer fighting than peacefully stepping down, to be frank,” said Mahmoud Balde, who was at the market and preparing to go to Conakry, the capital of Guinea. “Gambia is a very peaceful country and Jammeh should consider that.”
Nigerian officials recently approved asylum for Jammeh if he prepares to leave, but with Jammeh not appearing in any way ready for change, Gambians are worried about war. 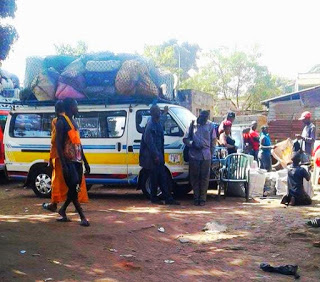 In his efforts to stay in power, Jammeh has implemented his old methods of instilling fear within the Gambian climate to control every single thing that people do.

The national election commissioner is now in exile in neighboring Senegal, probably after fleeing Jammeh’s notorious secret thugs and the official election results have vanished from the national website.
Jammeh also closed down media outlets, notably the popular Paradise FM, Teranga FM, which is known for its turbulent relationship with the government and others, too. The Committee to Protect Journalists called on Gambian authorities early this month to lift the broadcast ban on three independent radio stations.
He didn’t stop there, but also arrested activists associated with the #GambiaHasDecided campaign. Others had already flee the country fearing for their lives as Jammeh and his associates continuously hunt activists, journalists and anyone speaking bad against his government.
Gambian musicians continuously showed their complete dissatisfaction about the current situation in their recent songs and urged Jammeh to step down.
The African Union, known for supporting members against rebels or any challenge to their democracies strongly demanded Jammeh resign before January 19.
Jammeh is not alone. His ministers and followers are right behind him, putting pressure on for him to stay in power.
Why is this all happening? Perhaps Jammeh committed unspeakable crimes against the Gambian people during his many years in power and fears being arrested immediately after stepping down.
If the world will sit idle and watch a tiny country being destroyed by someone who willingly rejected the will of the people, then that is against the ideology of democracy.
What will happen is still unknown, but anything is possible as the clock ticks towards the deadline.
Will Jammeh surprise Gambians and the world once again by stepping down peacefully, or will he prefer to go to war with anyone willing to remove him by force?
Only he has the power to settle this national crisis in a peaceful way – by stepping aside for the good of the nation to let the new president take office.
Lama Jallow is a Senior Reporter for Youth Journalism International.
***
Journalism is under siege – in The Gambia and elsewhere.
Your tax-deductible gift supports student reporters
who bravely tell their stories.
HelpYJI.org