Bristol, Connecticut, UNITED STATES – After Thanksgiving, it’s all over.

I’m not talking about the conversations about Thanksgiving Day plans between classes, or the inevitable weight gain that most people experience between Halloween and Thanksgiving.

No, I am referring to the marching band performances during the football season. For me, they’ll end after rivals Bristol Eastern and Bristol Central high schools hold their annual Thanksgiving Day football game, also known as the “Battle of the Bell.”

There is a craze that is exhibited throughout the school by students and staff alike over the game, although I am not really sure why.

It is understandable that people have pride in their schools. But I don’t see the appeal in watching 20 or so football players beating each other to the ground over a football, while you could be at home, cooking or watching the Macy’s Thanksgiving Day Parade on television.

Of course band members exhibit this hype also, but I personally think it is more restrained because some of us are getting just a little tired of marching. After all, we band members have been prepping ourselves for the football games since August – or even last spring – if you count learning the songs.

It’s reasonable that once a person has been doing anything for any long period of time, he or she could start to see it from a different perspective. What I’m trying to say is that after awhile, the not-so-fun aspect of any activity starts to make itself very obvious.

And indeed it has.

Last year, they consisted of the average black polyester pants, a huge blue and white overcoat-looking jacket, and a small round hat with a flat top. (Let’s just say that you were lucky if your pants weren’t extremely long or short, or if your jacket didn’t swallow you up in its long blue polyester, gold-buttoned splendor.)

Then new uniforms came. Everyone was very excited – who wouldn’t be at the thought of a uniform that actually fit? They consist of black overalls, and a short blue and white jacket that actually does not have any large gold buttons. (Thank you, Performing Arts Booster Club and Bristol Board of Education!)

But soon after we got the uniforms, a new word started circulating – plumes. At first, I expected these to be short, blue feathers.

Boy, was I wrong.

As they were placed on top of our hats only seconds before we were to perform our first field show of this year’s football season, we realized that the plumes are neither short nor blue.

Instead, they are about a foot long – white, sparkly appendages that protrude from our already noticeable hats.

Although I am not particularly fond of wearing them, I do admit that the uniform, plums included, makes the entire band look very neat.

Of course, we do have to wear the uniforms to the Thanksgiving Day game, which has the biggest turnout of them all.

Apparently, this year Eastern will be occupying the visitor’s stands. I am not sure how so many spectators will fit on these meager bleachers, considering the fact that the band and dance squad together take up a section.

But this is the least of my worries.

You see, I do not know too much about this game, or even about the origin of its name. (What does a bell have to do with anything?) This is because last year it was postponed because of snow.

If the mention of snow doesn’t paint a picture of a hundred shivering band members trying to ward off hypothermia with hot chocolate and the occasional scarf, I don’t know what will. Needless to say, this year I am praying for weather above water’s freezing point.

Also, as with most marching experiences including parades, there is always the fear that I will somehow mess up.

I can just imagine myself moving left when the entire band is moving right, or I hear myself squeaking very noticeably during a rest in the song. (Any instrument that requires air in order to make a sound – in other words, every marching band instrument except for the percussion – will get very uncooperative in the cold. You try to play one note, and it comes out completely wrong.)

Of course, I should not be worrying about these things. After practicing the field show over and over since August for what feels like hundreds of times, and playing the song even more frequently, it is practically impossible to mess up so noticeably.

But still, leave it to me to be anxious about the things I don’t have to worry about.

All I know is that on Thanksgiving, I will just have to deal. I will deal with the weather, my anxiety about the possibility of messing up, and even my chagrin regarding the uniforms to perform at this game. When it comes down to it, I actually like being in the band.

After all, at least I have turkey waiting for me after the game. 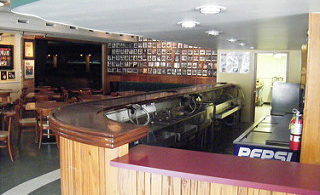