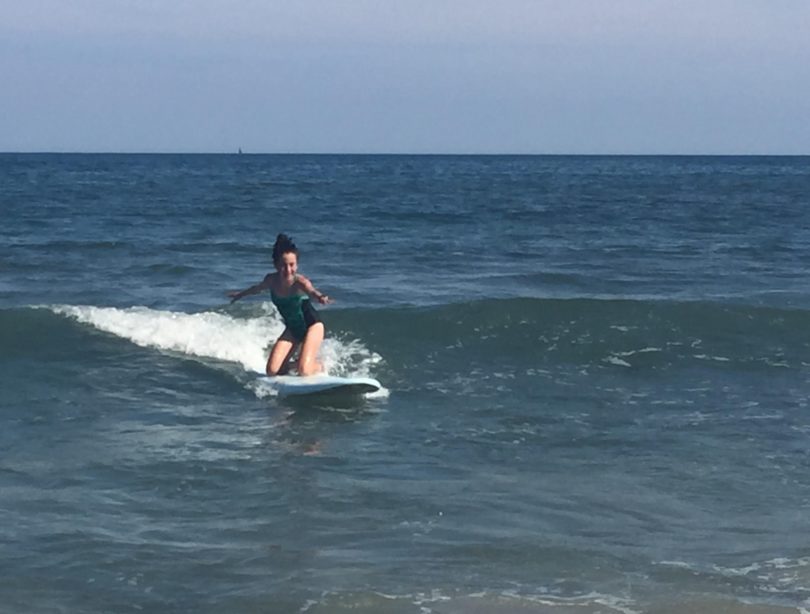 Little Compton, RHODE ISLAND, U.S.A. – Learning to surf gave me the opportunity to be thrilled, frightened, and feel a terrific sense of accomplishment – all in one afternoon.
Although I fell several times before I finally got up on the board, it didn’t feel like defeat. If anything, I liked it when the wave crashed up against me, engulfing me underneath its salty, blue wrath of power.

When we pulled into the beach parking lot, the waves looked threatening. But as I made my way into the water, it became apparent that they would pull me inwards toward shore, and I could easily make my way over them, even without a surfboard.
I spent some time body surfing, getting used to the water and the feeling of the waves pulling me in. I figured that this way, I would know what to expect when I finally got on a board. I later learned that those two experiences felt nothing alike.
The first time I even sat on a board, the wave pulled it out from under me. I then recognized that finding your balance on the board is everything.
As I worked to find my center of gravity the next several tries, I began to initiate a game plan. I figured out where to put my legs and arms and at what point I should attempt to stand up.
This casual analysis, along with sheer trial and error, helped me to determine what I needed to do to accomplish my goal of standing up on the surfboard. 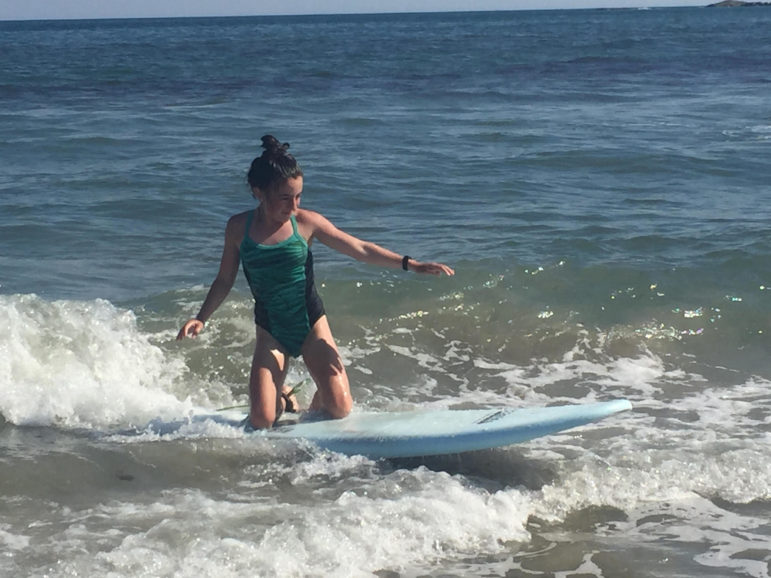 Isabel Slippen rides the wave as she learns to surf on a Rhode Island beach. (YJI photo)

After much anticipation, I finally realized what I needed to do. I went from my stomach, and gradually stood up – an experience I’ll never forget. I finally did it.
I proceeded to fall into the ocean the next couple tries before I got into a good rhythm and was able to ride the wave all the way to shore. The more comfortable I became on the surfboard, the easier getting up and standing became.
I now knew where to stand, and when to adjust my stance.
Surfing gave me so many opportunities to feel accomplished, disappointed and everything in between. I experienced the excitement of riding a wave, the suspense, and frustration in the moments when I knew the surfboard could be pulled out from under me any second, and the adept feeling when I finally stood up and rode the wave in.
I definitely want to surf again. Not only for the thrill, but also for the chance to improve at a magnificent summer sport.