A chandelier in the Ohio Statehouse. (Danish Bajwa/YJI)

Dublin, Ohio, U.S.A. – Decade after decade, Americans fought for legal equality of opportunity. When the U.S. Congress passed the National Labor Relations Act in 1935, the Equal Pay Act in 1963 and the Civil Rights Act in 1964, many were ecstatic.

America became the land of opportunity it claimed to be.

With this mindset, some settled, believing the fight for legal equality of opportunity to be over.

We’ve made significant progress, but the fight is not over. 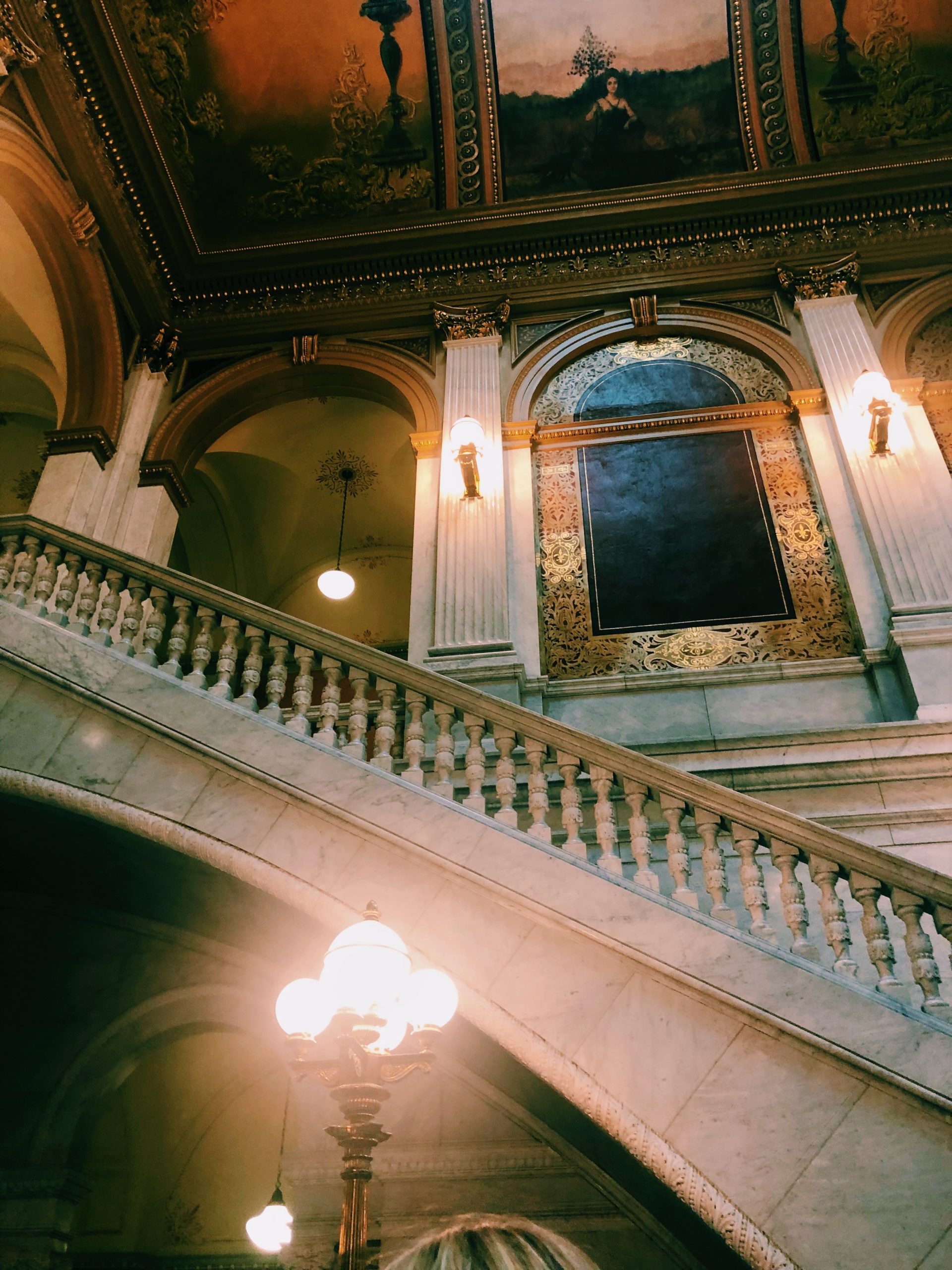 A staircase in the opulent Ohio Statehouse. (Danish Bajwa/YJI)

In April this year, two Democratic state lawmakers in Ohio, Randi Clites and Rep. Stephanie Howse, introduced the Ohio Equal Pay Act that lets us – the workers and the constituents of the state of Ohio – know our state officials are seeing this fight through.

The proposed statewide Equal Pay Act, as introduced, aims to “…require state contractors and economic incentive recipients to obtain an equal pay certificate, to require public employers to establish a job evaluation system to identify and eliminate sex-based wage disparities, to prohibit employers from seeking a prospective employee’s wage or salary history, and to prohibit employer retaliation against an employee who discusses salary or wage rates with another employee.”

According to Angie Phifer, an aide to Clites, the bill “differs [from the aforementioned federal acts] in that it is not federal legislation, it targets state employers, and it prohibits retaliation based on discussions of salary or wage rates. It also identifies job disparities between fields and not only within fields at the state government level.”

The proposed legislation works to further protect employees and our ideal of equal opportunity. It is not just the bill, but the commitment of the sponsors and cosponsors to further this ideal.

The Equal Pay Act, if passed, impacts many practically through policy.

As of yet, the bill has been referred to the commerce and labor committee, in which it will probably die. Regardless of the conclusion the legislature may come to, there is a strong need for this bill and its wide-reaching impacts. If you are not directly affected, you are indirectly affected.

It impacts me fundamentally and philosophically. I’m a 17-year-old guy and probably won’t be impacted, practically, by this bill anytime in the near future. 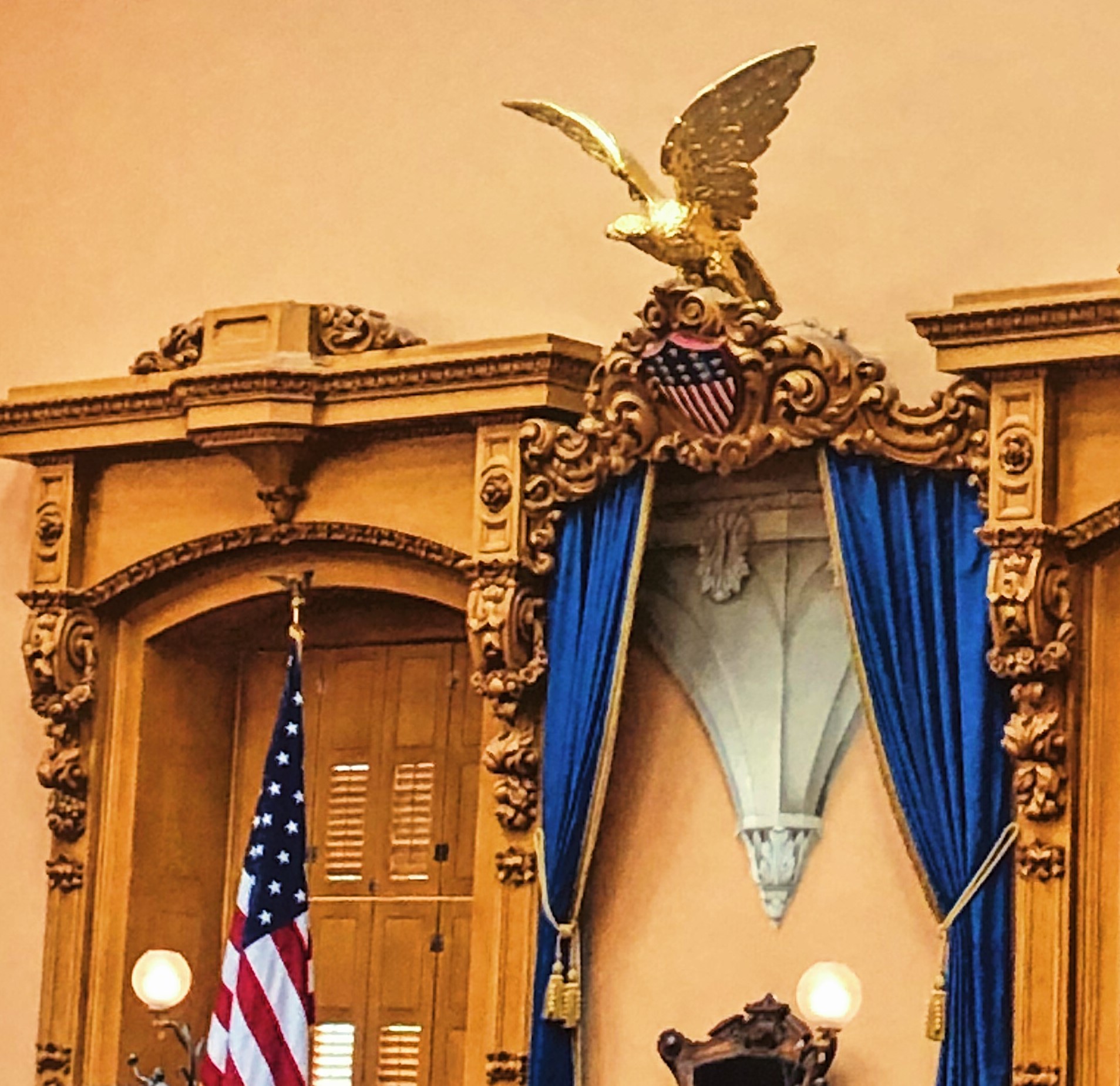 The legislative room in the Ohio Statehouse. (Danish Bajwa/YJI)

So what does it mean for those of us who would be fine with or without the legislation? It means we need to be active and informed constituents who talk about and revise our ideals.

It highlights the difference between who we wish to be, who we perceive ourselves to be, and who we are. It’s a call to realize just how far we are from our ideals and a chance to help people who need it.

Many people are busy trying to make ends meet and simply don’t have time to learn about bills or reach out to their representatives.

The government is directly or indirectly related to almost every individual decision we make. It’s true – too many bills are passed to analyze all of them while working a job or maybe two – but we ought to spend at least a couple minutes a week looking at what our representatives have done.

Why don’t we fight for the world we want?

This bill widened and deepened my understanding of the laws in our nation and it made me more able to fight against injustice.

To me, the Equal Pay Act is a matter of making Ohio a more just state. I believe the bill doesn’t have to impact us, individually, in a drastic way, for us to make a phone call or write a letter, so it may pass the state House and Senate to impact those who would drastically benefit from it.

We need to reach out to our state representatives and senators and make sure they vote on the basis of our voice for this bill and future bills.

We must fight to be the people we wish to be.

Danish Bajwa is a Junior Reporter with Youth Journalism International.