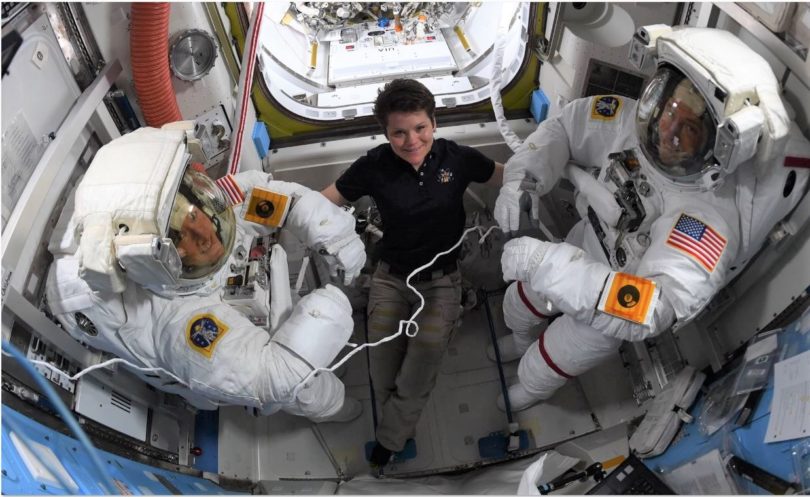 NASA retweeted this image from Astronaut Anne McClain's Twitter page. It shows McClain, center, with astronauts Christina Koch and Nick Hague before Koch and Hague ventured out on today's spacewalk.

Garrison, New York, U.S.A. – First. The United States got to the moon first, but we have forgotten all the times Russia beat us.

Who was the first woman in space? Sally Ride, NASA astronaut? No. Valentina Tereshkova, Soviet cosmonaut, in 1963.

The first female spacewalker was Svetlana Savitskaya, Soviet cosmonaut, in 1984. Two years earlier, she was the second woman in outer space.
We are so proud that we sent 12 men to walk on the moon. But that is the point. Twelve men. A woman has never set foot on the moon.

Astronauts Anne McClain and Christina Koch were to venture out in the spacesuits, upgrade the batteries on the International Space Station, and mark an important milestone during Women’s History Month. But no more.

Both of these talented and smart women came from the 2013 astronaut class, where 50 percent of participants were women. It seemed NASA had made a huge step to being gender equal.

The decision to postpone today’s all-female spacewalk was not made for sexist reasons, but for safety concerns, according to both NASA and McClain. But for space nuts and firm believers in gender equality like myself, it doesn’t make it hurt any less.

Extravehicular mobility unit suits come in three sizes – medium, large, and extra-large. Both McClain and Koch wear a medium, like most women astronauts because the suits were designed for the bulkier form of a man.

The space station has two suits of each size, which seems like plenty. However, only one medium and one large suit are currently in usable condition. The others are spares that require about 12 hours of preparation to be safe.

These suits had been prepped for a series of three spacewalks on March 22, March 29, and April 8.

But after her first spacewalk on March 22, McCain knew the large would most likely hinder her mobility and increase risk.

To stay on track with the spacewalk schedule, it was decided Hague would take McClain’s place on the spacewalk.

“This decision was based on my recommendation,” McClain tweeted March 27. “Leaders must make tough calls, and I am fortunate to work with a team who trusts my judgment. We must never accept a risk that can instead be mitigated. Safety of the crew and execution of the mission come first.”

There is no doubt that this is the right call from a safety perspective. But could NASA have done something to prevent this?

Spacesuits better sized for women would help. More and more women are becoming astronauts and pursuing other careers in the STEM (science, technology, engineering, and math) field. It seems as if the gender gap is growing smaller.

But this goes to show that in this world designed for men, women have additional roadblocks in their careers

Someday soon, we will go back to the moon and hopefully a woman will leave her footprint in the dust.

And on the day NASA finally makes it to Mars, I look forward to seeing a woman on the red planet alongside a man – going to the moon, to Mars, and beyond as equals.
But I mourn the loss of this landmark all-female spacewalk, and everything it represented.

For girls like me who love science, it was promising an equal future. So on that day of the first all-female spacewalk, whenever it may be, I hope the world will remember this occasion when we fell just short of this inspiring and historic moment that didn’t happen.

Lorelei McCarthy is a Junior Reporter with Youth Journalism International.

Go out of this world at the Space Center 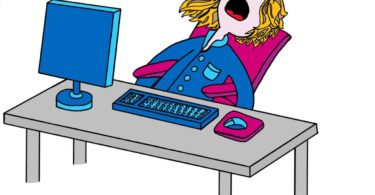 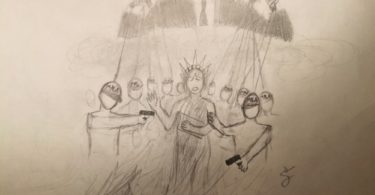 Lorelei McCarthy is a Junior Reporter with Youth Journalism International. She lives in Garrison, New York.