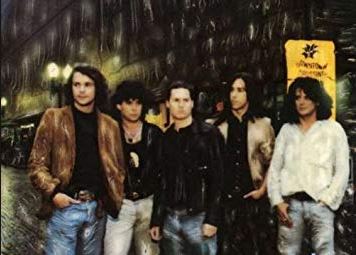 HARTFORD, Connecticut, U.S.A. — The Tragically Hip’s recent visit to Hartford’s Webster Theatre was nothing short of a minor religious event for the city’s rock underground and true fans of a music that was “alternative” before rock critics could find Seattle on a map..

The Canadian rockers’ tour of the East Coast in support of their new album, Music@Work, has everyone abuzz outside the theater as I arrive. Listening to the anxious chatter, even those who’ve never heard the Hip have to wonder: what’s so special about these guys?

They’ve been called quirky, strange, even disturbing — but at heart the Tragically Hip are a bluesy, frenetic, slightly theatrical rock act — one of a handful of its generation’s alternative/pop groups that actually rocked, kicking in the teeth of early albums by groups like REM (to which the Hip are endlessly compared) with their string of late 80s and early 90s albums.

Though they’ve appeared on Saturday Night Live and at Woodstock 99 and been praised by rock critics beginning with some of their earliest releases, U.S. chart success continues to elude them.

Gord Downie, the Hip’s front man, lets the band’s decade long struggle to break big in our neck of the woods roll off his back as he takes the stage.

The room is packed with men, women, girls and boys of all ages who HAVE to see this band and it seems there’s no place he’d rather be.

Downie is a great rock star because he’s the antithesis of the aesthetic — not old yet but not so very young, balding has driven him to shave his head completely. Underweight with a grinning, twitching rubber mask of a face framed with the wires of the ear monitors he adjusts after every number. He wears red pants that at times seem black against the elaborate stage lighting and a gray polyester shirt whose bottom buttons are either lost or forgotten, revealing not the rippling abs of a powerful rock god but the tender, furry underbelly of a man who just happens to front a hell of a band.

“Thank you very much,” he says in a deep, slightly froggy voice that seems incapable of the roar it becomes on record.

Studio trickery? Bad acoustics? Not a chance — the band brings out the big guns almost immediately, crashing into fan favorites “Grace, Too” and “Fully Completely” as quickly as possible.

The crowd — a strange mix of middle aged fans who’ve been with the Hip for years and new followers young enough to be their children — explodes, celebrating with almost religious devotion the arrival of the choir of angels who will save them from their mundane daily drudgery, if only for an hour and a half.

Next to me a cluster of drunken Canadians howls and hoots, raising their miniature Canadian flags.

Downie and the band continue to rock, drawing heavily and effectively from the new album with “My Music at Work,” “Freak Turbulence” and “Lake Fever.”

The crowd gives back all the energy it can -— breathlessly singing along, jumping about, dancing, screaming as beer spills on the ground all around and the thick, slightly sweet scent of pot erupts up from the crowd as it exhales collectively, making for one long, collective, pulsating, jerking, squealing, screaming rock orgasm.

Halfway through the set a staggering, drunken man with a slurred French accent steps out of the fray, putting his arm around my shoulder and asks: “Are you an American?”

“Really?” he screams over the roar of the crowd and the band. “I’m from Alberta! How did you know about these guys?”

That’s the thing about the Hip — while they play stadiums in their native Canada, they find themselves in venues like the Webster when venturing stateside.

The Webster is not a bad little hall, not as cramped and dirty as New London’s El-N-Gee or as antiseptic and faux hip as Toad’s Place. It’s what fliers, trade magazines and reviewers call a more intimate setting.

But the Hip’s defining characteristic is a sort of seething power that’s just too much for a room this size, threatening to explode from them at any moment, reducing the roof to splinters and spraying the audience in their maple leaf T-shirts with the small intestines and thick gray matter of the buffalo-sized security team.

Downie is one of the most genuinely fascinating front men in modern rock; not as contrived in his funkiness as Steven Tyler or as libidinously macho as Anthony Kiedis in his performance, but genuinely soulful, strange and interesting to watch. You never know what might happen.

At various points in the show he shakes bananas and red grapes at the audience as though they were deadly weapons, dancing about wildly, the mic his only anchor, polyester shirt sticking with profuse sweat to his heaving chest, mumbling poetry and gibberish over the fuzzy guitar riffs of Bobby Baker and Paul Langlois and pounding bass and drum work of Gordon Sinclair and Johnny Fay respectively.

Backup vocals and keyboard are provided by Chris Brown and Kate Fenner, formerly of the Bourbon Tabernacle Choir, who’re opening for the Hip in support of their second solo effort, Geronimo.

Fenner has an angel’s voice and is breathtaking and joyful on stage — she breaks down and laughs at Downed when he gets too strange, balancing astride the mic stand, spouting gibberish, soaked in his own sweat and bottled water, holding on for dear life to a cluster of red grapes.

As the show closes all of the first timers -— those who’ve never heard the band, having come with a friend or on a whim -— have given in, dancing, falling, embracing. In front of me half a dozen men in their early twenties pose for a group picture in the middle of the crowd, raising their plastic cups.

With two encores before the lights come up, it seems the band doesn’t want to leave anymore than the crowd wants to go home.  Fans hang around after the concert, exchanging set lists and show recordings, buying hats and T-shirts.

“Tonight was great,” a large, bearded guy named Rich says to me from nowhere.

“Did you record?” he asks hopefully.