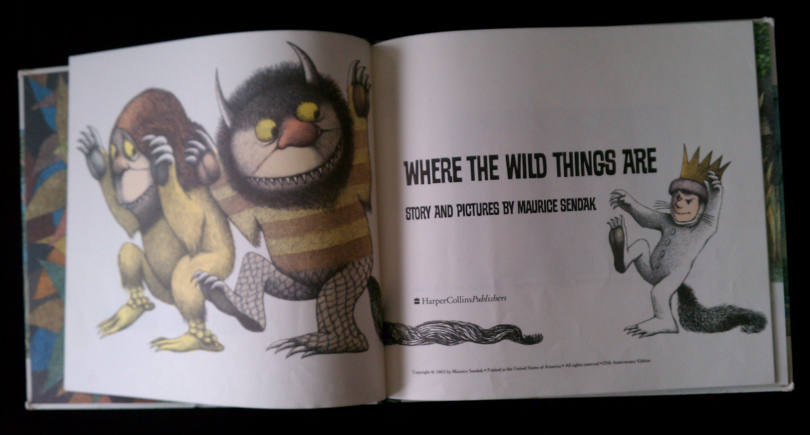 Title page from Maurice Sendak's Where The Wild Things Are. (YJI)
NEW BRITAIN, Connecticut, U.S.A. – Artist Maurice Sendak really liked kids.
That message comes through loud and clear in the exhibit Maurice Sendak, which is nearing the end of a one-year run at the New Britain Museum of American Art.
Sendak’s Where The Wild Things Are, published a half century ago, focuses on the story of a young boy named Max after he gets sent to his room and then transported to a far-off land of giant beasts. The book helped make Sendak a popular author for children and earned him a Caldecott Medal in 1964.

Over the course of his career, Sendak worked on more than 100 books before his death in May 2012 at age 83. In that time he had written and illustrated classics such as The Sign on Rosie’s Door,  In the Night Kitchen, Outside
Over There, and We Are All in the Dumps with Jack and Guy.
Art from all of these books and more, as well as drawings that Sendak sent out to his younger fans, are on
temporary display until Feb. 9 at the New Britain museum, not far from Sendak’s long-time home of Ridgefield, Conn.
Sendak loved drawing and writing stories for kids because he felt it was important for kids to read and learn things about the world. Sendak’s illustrations and writing often contained themes which were serious or disturbing, especially in Jack and Guy, which deals with the grim realities of homelessness and cruelty.

Sendak’s books were often the cause of controversy and debate over whether they were actually appropriate for kids, even over details such as the brief depiction of a naked boy in In the Night Kitchen.
Sendak grew tired of being controversial, but he never tried stopped trying to talk on the same level as the kids who read his books and wrote him letters.
When asked about the very dark tones of his work, Sendak responded candidly in a quotation of his on display in the exhibit:
“Grown-ups desperately need to feel safe, and then they project onto the kids. But what none of us seem to realize is how smart kids
are. They don’t like what we write for them, what we dish up for them, because it’s vapid, so they’ll go for the hard words, they’ll go for the hard concepts, they’ll go for the stuff where they can learn something, not didactic things, but passionate things.”
In a way, the Sendak exhibit is meant to celebrate not only the author and his work, but also the kids who read his books.
There were certainly plenty of kids in the exhibit recently, anyway, admiring pictures from Where The Wild Things Are, Rosie and Jack
and Guy, along with the 2009 film version of Where The Wild Things Are directed by Spike Jonze.
While a lot of the kids laughed and ran around, they showed a lot of respect for what they were seeing.
What these children may not have noticed is that Sendak’s books depict the darker side of childhood and revolutionized the landscape of picture books.
Growing up, Sendak became depressed often, something that stuck with him throughout his life. It was apparent in both his writing
and illustrations.
But Sendak loved children, so much so that he would get excited about receiving mail from his fans. He often replied with a drawing.
When he sent one of his fans, a young boy, an original illustration, the boy enjoyed it so much that he devoured the entire thing. The
letter he received back from the boy’s mother explaining that her son loved the drawing so much that he ate it excited Sendak.
Another quote pasted on one of the exhibit walls explains why Sendak valued his young fans:
“Kids don’t know about best sellers. They go for what they enjoy. They aren’t star chasers and they don’t suck up. It’s why I like
them.”
The New Britain museum did a fantastic job of showcasing Sendak’s art, which was clearly enjoyed by all ages of visitors, each with a different story of Sendak’s influence on their lives.
Alan Burkholder and Ambriel Johnson are Reporters for Youth Journalism International.
See Ambriel Johnson’s news story about this exhibit.