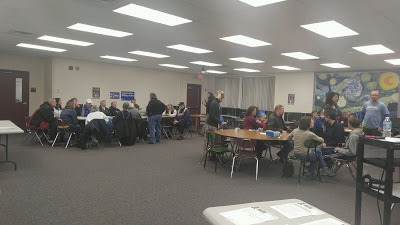 At the Democratic caucus at the Glenwood Community Middle School, supporters of Hillary Clinton gathered on the left, and supporters of Bernie Sanders on the right. (Garret Reich/YJI)

There are about 50 people attending. 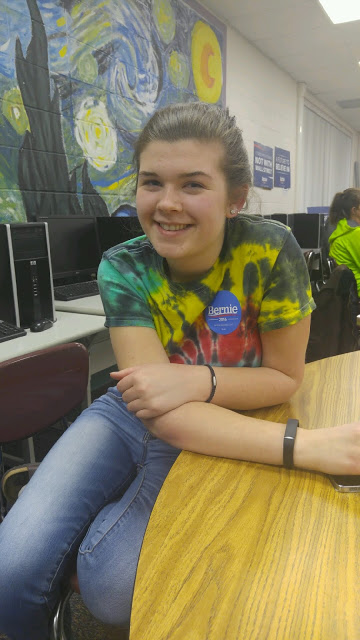 The turnout seems to be people who are over age 40 and evenly split between supporters of former U.S. Secretary of State Hillary Clinton and U.S. Sen. Bernie Sanders of Vermont.
At first, there’s a letter from each of the three candidates that attempts to persuade voters to support that candidate if undecided, or to switch.
So far, it’s pretty low key and not very exciting. There’s a lot of talk and respect for each of the two candidates.
Former Maryland Gov. Martin O’Malley doesn’t have any supporters at this caucus.
Even though she’s not yet eligible to vote, 15-year-old Kate Smithers is at the caucus.
“The young generation is the future of our country and therefore, I believe that we should be educated for later when we can for our country’s leader,” Smithers said.
But older people attending the caucus appeared to be very tired, and discouraged by the lack of organization and training. The woman in charge seems to be following a book of instructions.
By 8:30p.m., Sanders had 25 votes and Clinton had 16, winning each of them two delegates. The delegate election process then got started.


Robert and Millye Rager, both first time caucus goers, supported Sanders.
“I like him because he is for the people,” Millye Rager said.
Shelley Endicott supported Clinton.
“I believe Hillary is the most qualified,” Endicott said. “I want to see a woman president before I die.”
Garret Reich is a Reporter for Youth Journalism International
***
Your tax-deductible contribution helps students
supported by this non-profit.  Thank you!
www.HelpYJI.org